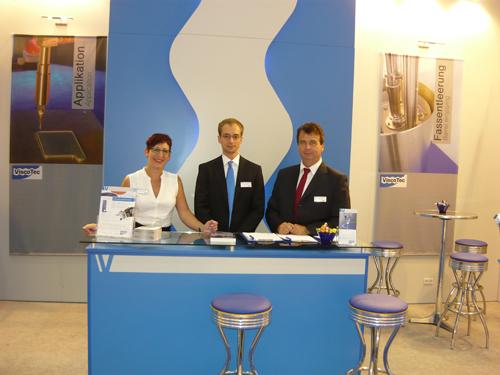 Increase Process Reliability – Lower CostsViscoTec Pumpen- u. Dosiertechnik GmbH appeared for the first time as an exhibitor at PVSEC from 5 to 8 September in Hamburg, Germany. EU PVSEC is recognized as the world's most important platform for exchange between science, industry and global PV solar markets. Focusing purely on photovoltaics, the exhibition was an ideal communication platform for ViscoTec to present its dosing and conveying solutions developed specifically for the requirements of solar module production. ViscoTec offers specialized dosing solutions for all production steps that work with adhesives, sealants and metal pastes. Such a system significantly increases process reliability, while also lowering costs – thereby ultimately leading to a significant increase in production efficiency.For manufacturing silicon wafers, the ignots need to be glued onto carrier plates so that they can be finely sawn. The most commonly used adhesives for this are two-component adhesives, which must be applied absolutely free of air bubbles. With the ViscoMT series of emptying units, ViscoTreat-Inline degassing and the ViscoDuo-V two-component system, ViscoTec can provide a complete system for this production stage that guarantees both bubble-free product feed as well as application of a constant, precise mixture of two-component adhesive.Wafers are metallized with aluminium and silver paste using screen-printing systems. These must be continuously supplied with abrasive and highly viscous paste. For the small containers predominantly used in these applications, ViscoTec offers the ViscoMT-D, a version of this emptying system developed specifically for such silk screening systems, which can be easily integrated as a feed unit into the existing system control technology.Since PV modules are exposed to extreme weather conditions, and must accordingly satisfy stringent demands on quality, perfect dosing results during production are directly proportional to the long-term success of the manufacturer's business. The most commonly used media for gluing module parts and casting connection sockets are two-component adhesives and potting compounds. Special material properties such as high viscosity and filler content place very high demands on dosing systems. The endless-piston principle of ViscoTec dosing pumps has been developed specifically for such applications. ViscoTec dosing systems can be easily integrated into various processes, thus ensuring high quality bonding and potting in automated production lines.ViscoTec, based in Töging a. Inn in Upper Bavaria, Germany, specializes in systems for conveying, dosing, applying, filling and emptying medium-high viscosity media. ViscoTec was founded in 1997 as a spin-off from the pump division of Resch Maschinenbau GmbH. More than 60 employees currently draw on over 20 years of expertise to manufacture sophisticated solutions for the global market.ViscoTec Pumpen- u. Dosiertechnik GmbH Amperstraße 4 84513 Töging a. Inn mail@viscotec.de www.viscotec.de Tel.: +49(0)8631/393-400 Fax +49(0)8631/393-500 Contact person press: Mrs. Manuela Plenk manuela.plenk@viscotec.de