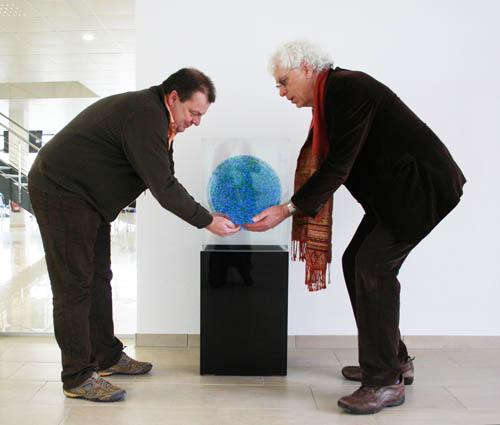 Already in 2009 was the first contact with the artist Knut-Peter Reinhardt and the Bavarian dosing technology manufacturer ViscoTec. Reinhardt, a high school teacher who worked with a group of students at a "Youth Research" project, dealt intensively with the topic "applied computer science."The focus was especially on the programming of a "3D plotter" on an axis system. The aim was to apply different acrylic colors with a special technique exactly in identical points on a glass plate.Through Internet research, Knut-Peter Reinhardt came across the principle of the eccentric screw pump and the dosing pumps of ViscoTec GmbH. He described the business unit manager Adhesives & Chemicals, Martin Stadler his situation and the two decided in discussion for the use of a 3RD8 dosing pump for the paint application in this project. The required parameters, a perfect spot dosing, a fast change of material and ease of cleaning could be optimally met by the dosing pump."Dot Art", an art project that Mr. Reinhardt realized in his spare time, also benefited by the ViscoTec technology. He got inspired on a trip through the Australian Aborigines, who pass on the dot-painting as an art form for generations. Even today, their works of art are created by manual setting of each color point - Mr. Reinhardt implemented this technology in our digital age. Thus many impressive works on glass and perspex in various styles and color combinations were created.In December 2011 Knut-Peter Reinhardt and his wife visited the new offices of ViscoTec GmbH and got a second dosing pump for his work as a loan. In return he gave Martin Stadler one of his works: "The Blue Planet", a result of parallel connection of individual glass panes as a substrate to a composite which can only appear in the viewer's eye the image of a ball (see picture). The fragmentation of the discs in points also creates a kind of pulsating vibration and movement of the sculpture. The object is even more intense by black light illumination in its colors and is now presented in the foyer of ViscoTec Pumpen- u. Dosiertechnik GmbH.ViscoTec, based in Töging a. Inn in Upper Bavaria, Germany, specializes in systems for conveying, dosing, applying, filling and emptying medium-high viscosity media. ViscoTec was founded in 1997 as a spin-off from the pump division of Resch Maschinenbau GmbH. More than 60 employees currently draw on over 20 years of expertise to manufacture sophisticated solutions for the global market.ViscoTec Pumpen- u. Dosiertechnik GmbH Amperstraße 13 84513 Töging a. Inn mail@viscotec.de www.viscotec.de Tel.: +49(0)8631/9274-0 Fax +49(0)8631/9274-300 Contact person press: Mrs. Manuela Plenk manuela.plenk@viscotec.de