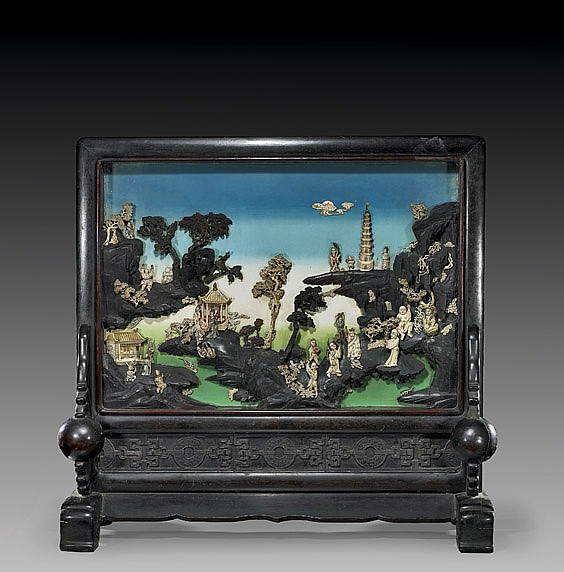 Online sales at Artfact, the world’s premier live auction platform, remained strong throughout July and August despite recent turmoil in the world’s financial markets. A canvas by Hughes Claude Pissarro (b. 1935) sold online for €20,000 at Matsart Auctioneers & Appraisers’ International Fine Art Summer Auction on July 5th. Pissarro, who is the grandson of Camille Pissarro (1803 - 1903), first exhibited at the age of fourteen and is probably best known for his Impressionist works known collectively as Petit Claude. Entitled Les deux Fillettes aux arceaux de la Roseraie, the Impressionist-style canvas had a high estimate of €15,000 and was signed by the artist. A Sioux Bead Decorated Saddle Blanket sold online for $2,100, more than twice its high estimate, at The Cobb’s July 9th auction. The soft hide blanket, which came from a local Peterborough, NH collection, had a 5” beaded border and was in good condition with only minor cracks and losses. At I.M. Chait’s July 10th Asian and International Fine Arts auction, an online buyer from Shanghi paid the top price of $90,000 for an antique Chinese Zitan wood tablescreen. The screen, which had a high estimate of $12,000, was inlaid with ivory Immortals and sages amidst carved wood rockery and trees. It was the eighth time this year that the Beverly Hills-based auctioneer sold a single item online for more than $25,000. A copy of John James Audubon’s (1785 - 1851) American Flamingo sold online for $8,500 at James D. Julia on August 25th. The chromolithograph from the J. Bein edition of Birds of America had been in the Brooks family of Boston and Medford, MA for more than a century before heading to auction. Though Americana values have declined somewhat in recent years, prices for original Audubon prints like this one have remained strong. Eldred’s of East Dennis, MA sold a White Jade Wine Pot for $50,740, including buyers premium, to an online buyer in Beijing during their August 25-28 Asian Art sale. The pot, which had a high estimate of $35,000, was among the top ten sales during the three-day auction which realized over $2.8 million.About Artfact: Founded in 1989, Artfact is the leading provider of SaaS technology and marketing services to the $40 billion live auctions market. Artfact provides over 20,000 estate and art auctioneers around the globe with marketing and e-commerce solutions including auction listings, online bidding, websites, and auction management software. Artfact’s network of web properties includes Artfact.com, AuctionZip.com and Invaluable.com, and reaches over 2.5 million monthly unique users.  Based in Boston and with offices in Pennsylvania and the UK, Artfact currently has over 65 employees. In December 2009, Artfact closed a $13mm round of funding led by Commonwealth Capital Partners and Ascent Venture Partners.Joshua Payne info@fuscofour.com (6170 363-0405 8 Allenwood Street Boston, MA 02132

10-09-2018 | Arts & Culture
gisela graf communications
Georgia. Art for Architecture
Soviet Modernist Mosaics from 1960 to 1990 While buildings in the style of Soviet modernism in Georgia have received global recognition for several decades, the artworks created for architecture during this period – monumental, decorative mosaics – are still waiting to be discovered and appreciated internationally. These glorious, colourful mosaics were, and still are, an independent yet inseparable part of the architecture in Georgia. They express the function of the respective
01-19-2017 | Industry, Real Estate & Constr …
Climaveneta
Contemporary…and sustainable art!
Luigi Pecci Centre Mitsubishi Electric Hydronics & IT Cooling Systems, through its brand Climaveneta, supplied the air conditioning system for the rebirth of the Luigi Pecci Centre, in Florence. After 6 years of construction and being closed for 3 years, The Luigi Pecci Centre for Contemporary Art has once again reopened in Autumn 2016. It is the first institution in Italy to be built from scratch with the specific intent to exhibit,
09-11-2012 | Arts & Culture
Ogilvy Public Relations Worldwide
Art Bengaluru’s International Art Auction
Includes artworks of celebrated International artists & unique lots including sculptures, coffee tables, chairs and other collectors’ items. Bangalore, India, Friday - August 24th, 2012 -- ‘Art Bengaluru 2012’ ( http://www.artbengaluru.in ), South India’s premier festival for contemporary art and culture, presents an iconic event as a part of its celebrations – an International Art Auction ( http://www.artbengaluru.in/auction.html ). The Auction, being presented by well-known auctioneer - Angira Arya, will take
09-14-2011 | Arts & Culture
Light Space & Time Online Gallery
Photography Art Contest Announced by Art Gallery
Jupiter, Florida - September 13, 2011 -- Light Space & Time Online Art Gallery announces a Juried Art Contest with an “All Photography” theme for the Month of September 2011. All photographers from around the world are called upon to make online submissions with the winners being included in the gallery’s October 2011 online art group exhibition. Light Space & Time encourages entries from all photographers regardless of where they
11-15-2010 | Arts & Culture
Alin Media Group
Got Art?
HEY – listen up! We have some exciting news!! We’re having a CONTEST! We are looking to find one talented artist to create our T-Shirt Design. DEADLINE: December 1, 2010 – Winner announced December 31, 2010 We’re selecting 12 artists to display on our 2011 Calendar. The Top 3 Artists will be profiled with their entry on our fan page and voting will be open to everyone on Twitter and Facebook! That's right;
04-01-2008 | Arts & Culture
Asylum Gallery
Call for Mail Art
Artists from around the world are invited to send mail art* on the theme Global Warming: A Hot Time in the Old Town! Pieces should be no larger than 8” x 10” (inches) and received by May 15th. All work received will be exhibited from May 24th to June 22nd. A reception will be held on June 14th for Sacramento’s 2nd Saturday festivities, during which many galleries
Comments about openPR
Your portal is fast, simple, and easy to use. Others may have more functions but they also demand more editing time, you have to preformat the text in order to achieve a good result etc. I think openPR is really fantastic!
Andreas Knepper, wallmedien AG