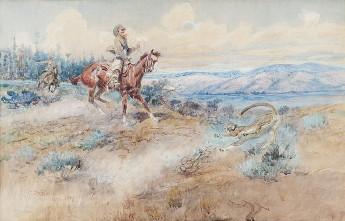 Artfact Live! presents live online bidding on Coeur d’Alene’s annual auction of rare and important American paintings July 23, 2011. This spectacular auction features fine 19th and 20th century Western & American art, including paintings, sculpture, works on paper and more. The sale features paintings by renowned artists Albert Bierstadt and Charles Mario Russell, and includes over 300 fine works of art from consignors around the country. For additional information, or to bid live online from anywhere in the world on Artfact Live! please visit www.Artfact.com.Highlighting the auction is an important painting by noted Hudson River School painter Albert Bierstadt. Bierstadt completed the work, a breathtaking landscape view of Washington State’s towering Mount Rainier, in 1890. The prodigious painting measures 54 x 83 inches and is a fine example of Bierstadt’s signature depiction of light and the natural wonders of North America. The painting is estimated to achieve between $1.5 and $2.5 million at auction. Three additional paintings by Bierstadt are also offered at this exciting auction. The current price record for a Bierstadt painting sold at auction was set in 2008 at $7,321,000, according to the comprehensive Artfact.com auction price database.A painting by artist Charles Marion Russell, titled A Dangerous Sport, is also offered. Russell is well known for his paintings of the American Old West, of which he completed over 2,000 in total. His work often focused on archetypal figures such as cowboys and Native Americans, set against colorful sun-drenched landscapes. A Dangerous Sport shows a man on horseback roping a struggling bobcat, epitomizing Russell’s flare for the Old West and the cultures of its people. Though present day sentiment condemns the “sport” of roping, it was one of the diversions that offered excitement and challenge to cowboys around the turn of the century. Such moments of high drama and danger occupied Russell’s imagination throughout his artistic career and earned him a reputation as “The Cowboy Artist”. This painting measures 17.5 x 27.5 inches and is estimated to bring $1 to $2 million.Also offered is Moonlight, Pueblo de Taos, a painting by Eanger Irving Couse. The painting is a nighttime scene in a Taos village, showing a Native American woman and two children lighting a small campfire in the foreground. This signed painting is one of many Couse executed of the Taos Pueblo dwellers, having spent a considerable span of his career amongst the tribe. Couse was also a founding member of the Taos Society of Artists, and was elected as its first president. Moonlight, Pueblo de Taos is estimated to sell for $250,000 - $300,000.With over 300 lots in all, the auction features a wide variety of additional Western and American art including paintings by Maynard Dixon, Henry Farny and Andrew Wyeth. A full-color catalog of the sale is available at www.Artfact.com. In addition to this exciting auction, Artfact Live! also offers live online bidding at premier auctions around the world. Artfact Live! bidders benefit from an enhanced, easy-to-use bidding console; a comprehensive auction database; and a powerful search engine that allows bidders to search consignments by keyword, auction house, artist name and more. To register to bid at this or any other Artfact Live! auction, please visit www.Artfact.com. ###Artfact.com is the largest global marketplace of fine and decorative arts, antiques, collectibles, and estate auctions. In 2009, Artfact launched two live online bidding platforms, Artfact Live! and Invaluable Live! In the UK, allowing users to bid in real-time on auctions held around the world reaching a community of more than 10 million knowledgeable collectors and dealers worldwide. In 2010, Artfact merged with AuctionZip.com, increasing the reach of their platforms to include thousands of auction houses around the country. Artfact's industry leading database includes more than 57 million complete auction results totaling more than $204 billion in value, including information on more than 500,000 international artists.Joshua Payne info@fuscofour.com 617-363-0405 8 Allenwood Street Boston, MA 02132