Tony Curtis Fans Around the Globe Can Bid Live on Artfact Live! When Property from his Estate is Offered at Julien's Auctions 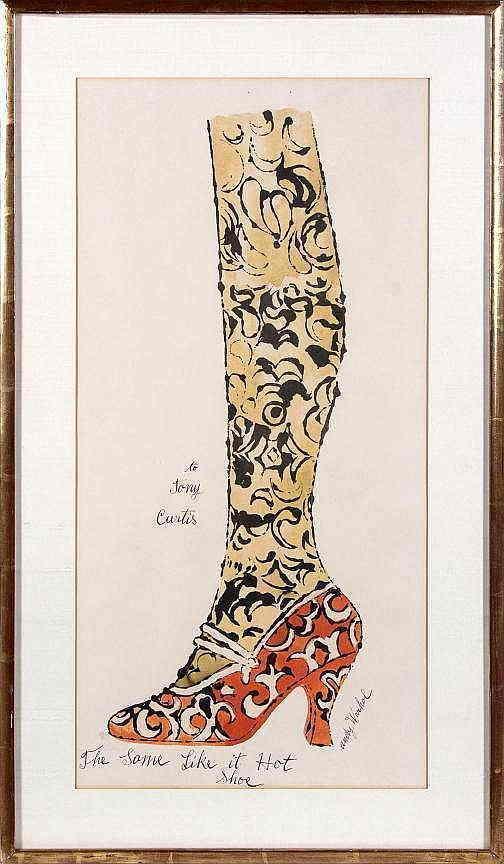 (Beverly Hills, CA) Artfact Live! will offer live online bidding for Julien’s Auctions’ sale of property from the estate of Tony Curtis, taking place September 17, 2011 and encompassing over 450 items from the life and career of the renowned actor. Items up for auction include an original work by Andy Warhol, sketches by Balthus, ceramics and prints by Picasso and Chagall, a fine collection of 20th century American and European paintings, as well as works of art by Curtis himself. A portion of the proceeds from the auction will benefit Shiloh Horse Rescue, a charitable organization founded by Jill and Tony Curtis. For additional information, or to bid live online from anywhere in the world on Artfact Live! please visit www.Artfact.com.

The singular Hollywood icon, whose off-screen character was often as entertaining as his on-screen one, starred in internationally acclaimed films such as Some Like It Hot, Spartacus, Houdini, and 1968’s The Boston Strangler. Curtis’ career spanned six decades with his highest popularity during the 1950s and 1960s due to his striking good looks and cinematic charm.  In addition to being a popular actor, Curtis was a talented artist and a fine art connoisseur.

The most notable item up for auction is an original work by Andy Warhol titled Some Like it Hot Shoe, given by the artist to Curtis as a gift. The circa 1955 piece, a lithograph and watercolor on paper, is signed lower right and inscribed "To Tony Curtis," "The Some Like it Hot Shoe," "Andy Warhol" (est. $20,000-$30,000). This one-of-a-kind image, with strong origins in both Hollywood and the art world, and is sure to draw attention of collectors.

Additional fine art highlights crossing the block include three drawings by Balthus. The highly esteemed but controversial Polish-French artist, a protégé of Henri Matisse, is well know for his figural work and widely recognized as an important 20th century artist. The three sketches featured are Study for 'Katia Reading’, in graphite on paper, monogrammed "Bs” (est $30,000-40,000); an untitled sketch of a girl from a series of 12 sketches, circa 1970, in graphite on paper and signed "Balthus" (est. $25,000-$35,000); and Nu Sur un Canapé, 1948, in pen and India ink on paper (est. $25,000-35,000).

The auction will also showcase choice memorabilia items from Curtis’ acting career, including a yachtsman’s jacket from the famous shipboard kissing scene with Marilyn Monroe in Some Like it Hot. The double-breasted navy wool blazer is embellished with a red and gold crest patch on the breast pocket, gold tone buttons and insignia striping with a trefoil on the sleeve cuffs (est. $10,000-15,000).

A full-color catalog for the sale is available on www.Artfact.com.

In addition to this important Tony Curtis collection, Artfact Live! also offers live online bidding at premier auctions around the world. Artfact Live! bidders benefit from an enhanced, easy-to-use bidding console; a comprehensive auction database; and a powerful search engine that allows bidders to search consignments by keyword, auction house, artist name and more. To register to bid at this or any other Artfact Live! auction, please visit www.Artfact.com.

Artfact.com is the largest global marketplace of fine and decorative arts, antiques, collectibles, and estate auctions. In 2009, Artfact launched two live online bidding platforms, Artfact Live! and Invaluable Live! In the UK, allowing users to bid in real-time on auctions held around the world reaching a community of more than 10 million knowledgeable collectors and dealers worldwide. In 2010, Artfact merged with AuctionZip.com, increasing the reach of their platforms to include thousands of auction houses around the country. Artfact's industry leading database includes more than 57 million complete auction results totaling more than $204 billion in value, including information on more than 500,000 international artists.

You can edit or delete your press release Tony Curtis Fans Around the Globe Can Bid Live on Artfact Live! When Property from his Estate is Offered at Julien's Auctions here