A historic television and expansion plans for Waste King 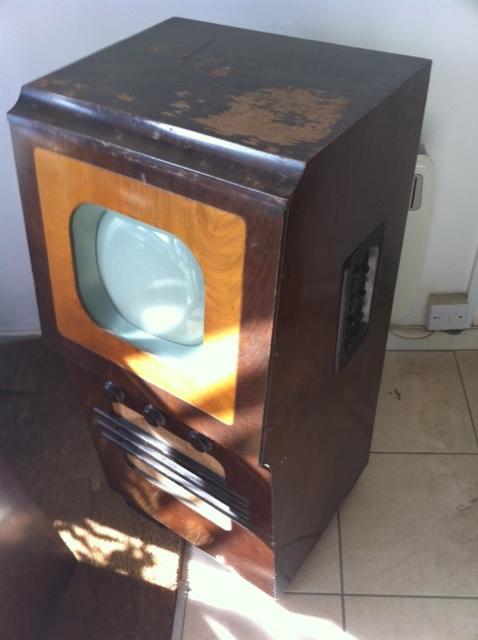 The television, dating from around 1951.

Customers of the specialist collections, clearance and recycling company, Waste King, are producing increasingly interesting and unusual items for it to recycle.Having being given one customer’s pet Giant African Land Snail – now named ‘Colin’ and making a real ‘hit’ with Waste King staff as well as with children at a local school which it visits, for ‘observation’ from time to time – a while ago, Waste King staff have now been given a real collector’s item: a television set from the very early 1950s.Dating from around 1950 or 1951 and, thus, pre-dating the ‘TV boom’ caused by the Queen’s Coronation in 1953, the television is taxing Waste King’s ingenuity at recycling the things it collects.Waste King’s managing director, Glenn Currie, commented: “We relish this sort of challenge: finding an environmentally-friendly way to dispose of or, preferably, completely recycle unusual items. “Obviously, this television has an appeal as a collector’s item but, if a collector or a local museum doesn’t come forward to express an interest in it, we’ll be taking it apart to recycle as many of its components as we can.”Waste King guarantees to recycle at least 75 per cent of everything it collects – although, thanks to implementing an improved system it instigated a few months ago, that rate is closer to 90 per cent of everything that is brought to its warehouse in Hemel Hempstead.“We’re keen to be able to improve on that record and so keep more items away from landfill sites - and help our environment to become ‘greener’,” Currie continued.“However, that target – which we’ve set ourselves – could get even more challenging over the next few months as we enlarge not only our labour force but also our fleet of vehicles.”Waste King is adding three vehicles to its fleet – two of them immediately. This will mean that the company is better able to cope with the current increase in demand for its environmentally-friendly waste collection and recycling services.“Maybe the more waste we collect, the greater will be the challenge to dispose of it in an environmentally-friendly way,” commented Currie’s fellow director, Andy Cattigan. “Nonetheless, we’ve done pretty well so far in exceeding our recycling targets and I’m sure we’ll be able to continue doing so in the future.”EndAbout Waste King LtdA specialist collections, clearance and recycling company, Waste King serves the domestic and commercial markets. It focuses not only on providing a friendly, efficient, cost-effective service but also one which is environmentally friendly. In particular, Waste King’s uniformed, Environment Agency-licensed staff take time to ensure that the maximum amount of waste can be recycled and that all the waste it collects is disposed of in an environmentally friendly way.Waste King was formed, in 2007, by Glenn Currie and Andy Cattigan, who had experience in sales and IT respectively and were keen to ‘do something to help the environment’.Waste King Ltd Unit 13, Frogmore Industrial Estate, Hemel Hempstead, HP3 9RW Tel: 0800 234 3657/ 01442 216784; Web: http://www.wasteking.co.uk Contact: Glenn Currie, 0800 234 3657 / 07761 577001; glenn.currie@wasteking.co.uk PR contacts: Bob Little, Bob Little Press & PR, 01727 860405; bob.little@boblittlepr.com