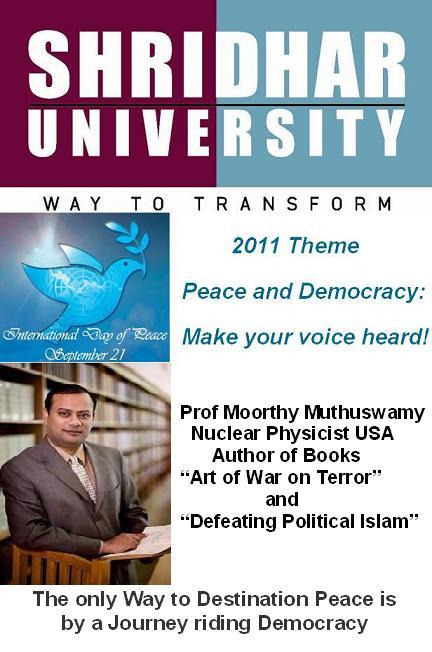 The Theme for this year is “Peace and Democracy: Make Your Voice Heard”Shridhar University Pilani located in the Shekhawati region of Rajasthan has a rich tradition of observing various International Days to bring awareness to the enrolled students and thus prepare them for a global future. Prof BR Natarajan Pro Vice Chancellor and Prof Bir Singh addressed the faculty and students of the University on September 21 and shared the following.“Democracy is an objective. Democratization is a process. Democratization serves the cause of peace because it offers the possibility of justice and of progressive change without force” - so says Former UN Secretary General Boutros Boutros-Ghali. The first International Day of Peace was observed in 1982 and 2011 is the 30th anniversary of same. It was earlier celebrated on the third Tuesday in September but after 2001 it is being observed on September 21. Peace and democracy are inextricably linked. Together, they form a partnership that promotes the well-being of all. Embodied in the Universal Declaration of Human Rights, democracy supports an environment for a host of political rights and civil liberties. Democracy must be nurtured and defended as it is crucial for human rights and provides channels for resolving differences as well as it gives hope to the marginalized and power to the people. In recent times the world has seen young women and men in Tunisia, Egypt and several other countries demonstrating the power of solidarity by reaching out and rallying together for the common goal of dignity and human rights. This powerful force brings with it the potential to create a peaceful and democratic future.There are many ways to participate in democratic practices which include taking part in dialogue on constitutional processes, advocating for civil society empowerment, joining the struggle for gender equality and against discrimination, engaging in civic education and promoting voter registration, etc.As the world becomes increasingly interdependent, students by becoming subjects in the world rather than the objects of the policies of others, face even greater challenges and opportunities. To harness the energy and intellect of youth in the hope of building a sustainable culture of peace together, the curriculum must lay emphasis on Peace education. In the current context of globalization, educating for leadership and global citizenship has become even more essential to enable students to participate and make their voices heard. In short, the world at large requires the students in India today to speak out for social justice and freedom of the press; for a clean environment and women’s empowerment; for the rule of law and the right to a say in one’s own future.The highlights of the celebrations included a message for Shridhar University students from author of Books “Art of War on Terror” and “Defeating Political Islam – The New Cold war” Prof Moorthy Muthuswamy (homepage http://www.moorthymuthuswamy.com/ USA based Nuclear Physicist who holds a Masters in Physics from BITS Pilani and a PhD from Stony Brooks New York. “One of the main reasons why I got involved in doing research on terrorism is due to my realization that we are only as good, as safe as the community or the nation we live. That is, our selfishness and compassion should extend to include nurturing and safe-guarding the well-being of the community we are part of. Specifically, peace is achieved through a continuing process of collective alertness and action. I think for India to robustly develop in the next decades and for its citizens to feel safe, our young people have to increasingly think along the above lines and participate in the democratic political process, even as they are focused on their own careers and their families.”It is for sure that the only Way to Destination Peace is by a Journey riding Democracy. For more details see http://www.shridharuniversity.ac.inAbout Shridhar University: An initiative of the Sarvhit Trust, Shridhar University Pilani has been established under Section 2(f) of UGC Act 1956 incorporated by Government of Rajasthan vide Ordinance No. 3 of 2009 and the same ratified by the Rajasthan Legislative Assembly vide Act No. 4 of 2010 as The SHRIDHAR UNIVERSITY ACT BIGODNA, JHUNJHUNU. Further, Vide letter F.No 8-3/2010(CPP-I/PU) dated 31 May 2010, the University Grants Commission (UGC) has also notified Shridhar University under Section 2(f) of UGC Act 1956. ISO 9001:2008 certified Shridhar University has 11 Schools of Learning offering various Certificate, Diploma, Under Graduate, Post Graduate as well as Doctoral programmes. In order to prepare students for a global future, Shridhar University has actively taken up collaborations with various national & international institutions and already has signed MoU with top ranking Athens University of Economics and Business - AUEB, Greece. For more details see http://www.shridharuniversity.ac.inShridhar University Public Relations Officer Pilani - Chirawa Road Pilani Rajasthan 333031 India Phone 91-1596-510000 Fax 91-1596-510002 Email: info@shridharuniversity.ac.in Website: http://www.shridharuniversity.ac.in