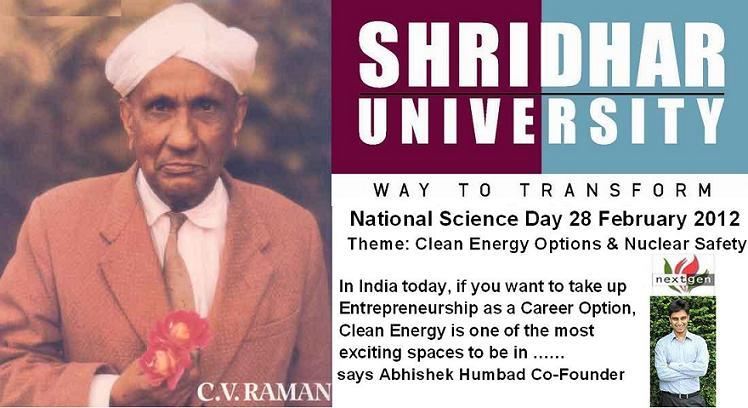 None other than the Prime Minister of India Dr Manmohan Singh has recently expressed concern stating that China is far ahead of India today in Science thus giving a wakeup call across the nation.

To popularize the benefits of scientific knowledge, 28th February is celebrated all over India as National Science Day (NSD) to mark the discovery of Nobel Prize winning Raman Effect by the great Indian Physicist Sir C. V. Raman in 1928 on same day. February 28 also happens to be the birthday of Linus Pauling who had won the undivided Nobel Prize twice - for Chemistry in 1954 and for Peace in 1962. The basic objective for celebration of National Science Day is to spread the message of importance of science and its application among the people.

Addressing the faculty members and students of Shridhar University Pilani, Prof BR Natarajan Pro Vice Chancellor gave an overview of the importance of the day and spoke at length on various aspects of the theme for this year celebration “Clean Energy Options and Nuclear Safety.”

NextGen PMS is an energy and environment company previously incubated at NSRCEL, IIM-Bangalore and TBI - BITS-Pilani. The management team is a young and passionate team from BITS-Pilani, IITs and IIMs. Its a USD 1 million company with operations in India, Sri Lanka and Abu Dhabi. NextGen operates in 2 domains of waste to energy and sustainability consulting. In the waste to energy domain, NextGen has developed proprietary technology for powering telecom towers at costs which are 30% cheaper than current diesel costs. In the sustainability consulting domain, NextGen helps corporates understand their current baseline from the perspective of various sustainability parameters and helps them develop and implement a low carbon path. Some of their clients in the sustainability consulting space include Intel, ICICI, Infosys, Godrej, Pidilite, Mahindra, RCB, HDFC, RBI amongst others. NextGen has also developed a sustainability and emission management tool jointly with MindTree Ltd. For more details about NextGen see http://nextgenpms.com/

On this occasion, Co-Founder of NextGen, Mr Abhishek Humbad who is an alumnus of BITS Pilani and IIM Bangalore shared the following thoughts.

“Energy is the most important commodity across the globe. Most of the recent wars have been on energy. The world's most valuable companies in every country are the ones that deal with generation of energy. For many countries across the globe, the need for clean energy is driven by the intent to reduce carbon emissions. However the need for clean energy in India is graver and larger. In India clean energy is important from the perspective of energy access and energy security. More than 50% of India's population does not have access to reliable and sufficient power supply. There are still some places where the grid has not reached and in many places, the grid is there but the power is insufficient and unreliable. Decentralized renewable energy solutions are the only option to meet the needs of this population. Most of India's fossil fuel consumption is imported, providing a huge risk from an energy security perspective. Given, that India's energy needs are going to increase exponentially, clean energy options assume greater significance.

Given, the technological and operational issues with clean energy projects, entrepreneur driven approach is the only model of scaling it up effectively. The government needs to provide the necessary operational push, however the implementation has to be done by an entrepreneur to ensure long term sustainability. India with its large market and a great entrepreneurial spirit can become a showcase clean energy driven country if the government policies are on the right track. However lot of government policies are flawed (eg. Quantum of LPG subsidy in South Delhi is 10 times the quantum of subsidy given to the national biogas program). The politics of power creates many inefficiencies in the market which is hindering growth.

Globally, 2010-2011 was the first year, when the investments in clean tech were higher than the investments in conventional fuel technologies. Emerging technologies like fuel cell, 3 rd generation solar PV, solar thermal, energy storage, biofuel etc are expected to drive the next wave of clean energy. Though the inflection point, where clean energy is cheaper than conventional energy is still to come (Google was working on R < C - Renewable cheaper than Coal program but later dropped it), this point is somewhere very close, post which there will be explosion of clean energy implementation across the globe. “

There was a thunderous applause from the audience on hearing Mr Abhishek Humbad’s passion packed statement “If you want to take up entrepreneurship as a career option, clean energy is one of the most exciting spaces to be in, especially in India.”