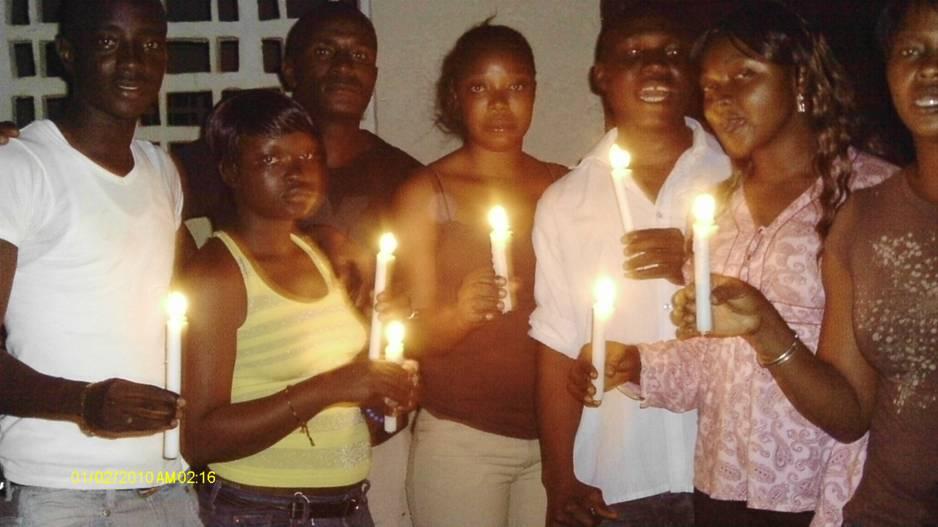 Led by Rotary Peace Fellow Richelieu Allison, a peace caravan on November 10 began its journey through four countries in West Africa to promote cross-border dialogue and grassroots peace building. The Rotary West African peace caravan, which consists of two large buses with 40 participants, is traveling to border towns in Sierra Leone, Liberia, Guinea and Ivory Coast to help resolve deep rooted disputes and increase the involvement of local people in the peace building process. The caravan embarks at a critical time in the region’s history with renewed optimism for peace and democracy. Guinea held its first democratic election since the 1984 military coup earlier this month. In neighboring Ivory Coast, peaceful elections also took place, and Ivorians will choose their new president in a run-off election later this month. Once a beacon of prosperity and stability, Ivory Coast plunged into instability when northern rebels took up arms in 2002, and elections were postponed many times since 2005. “Like all West Africans, we are hoping that the recent elections in Ivory Coast and Guinea will help stabilize the Mano River Union (MRU) and ease our political and economical troubles,” said Allison. “We are praying that the results will be peacefully accepted. However, a lot still needs to be done and elections are just a piece of the bar.”The peace caravan, which will include workshops and peace vigils along its journey, is sponsored by the Dutch charity Interchurch Organization for Development Cooperation (ICCO) and supported by Rotary Clubs in Sierra Leone and Liberia. “Rotary is fully committed to promoting peace,” said Sheila John, president of Rotary Club of Freetown. “The Rotary peace camp and caravan is working toward bringing together youth leaders, government representatives and traditional leaders from post-conflict and fragile states in West Africa, including Sierra Leone.”The first stop of the caravan was Monrovia (capital of Liberia) where it was greeted by Joseph Boakai, Vice President of Liberia and past President of the Monrovia Rotary Club; Francis Kaikai, Head of Civil Affairs of the UN Mission in Liberia; John Ballout, member of the Liberian Senate, and members of the Monrovia Rotary Club. Bloody civil wars ravaged Sierra Leone and Liberia in the 1990s, which claimed the lives of more than 200,000 and further displaced three million people, many of them into neighboring countries“There is still a need to ensure that the people continue to reconcile their differences,” said Allison, a native of Liberia. “I saw summary executions. I witnessed the recruitment of my friends who, as young as eight, were sent to the battlefront,” he recalls. In 2006, Allison graduated from Rotary’s Peace and Conflict Studies certificate program at Chulalongkorn University, in Bangkok, Thailand. Determined to put into practice what he learned, Allison returned home to continue to work with the West African Youth Network (WAYN), a group that mobilizes and trains young people to restore peace and human rights in West Africa. Rotary International President Ray Klinginsmith notes that 516 Rotary Peace Centers alumni, including 54 Africans, already are making a difference in grass-roots efforts and key decision-making positions in governments and organizations around the world. “It is this growing network of peace fellows like Richelieu Allison, who has returned to his homeland and is applying directly what he learned, that makes me believe that peace is possible, and that Africa will have a peaceful and prosperous future,” said Klinginsmith.The Rotary Centers for International Studies in peace and conflict resolution were launched in 2002 to help the next generation of government officials, diplomats and humanitarian leaders develop the skills needed to reduce the threat of war and violence worldwide.Through a worldwide, competitive process, this program awards full scholarships to up to 100 Rotary Peace Fellows each year. Fellows embark on one-to-two years of study to earn a master’s-level degree or a professional certificate in peace and conflict studies at one of six Rotary Peace Centers at leading universities in Argentina, Australia, England, Japan, the United States and Thailand. To learn more visit: www.rotary.org. Visuals (stills and videos) are available at: www.thenewsmarket.com/rotaryinternational.# # #Rotary is an organization of business and professional leaders united worldwide to provide humanitarian service and help to build goodwill and peace in the world. It is comprised of 1.2 million members working in over 33,000 clubs in more than 200 countries and geographical areas. Rotary members initiate community projects that address many of today’s most critical issues, such as poverty, disease and illiteracy.Kiki Melonides Media Relations Rotary International 1560 Sherman Avenue Evanston, IL 60201 USA kiki.melonides@rotary.org +1 847 866 3134