Made in America: The Mather Work Incentive Posters 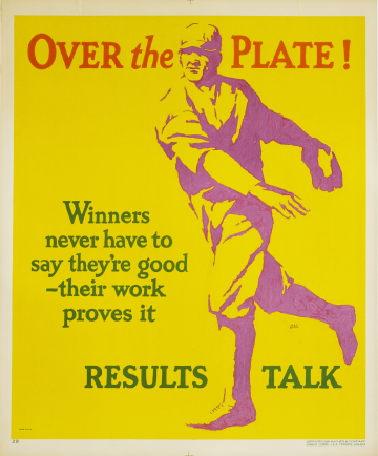 By Jim LapidesPrinted in Chicago between 1923 and 1929, Mather Work Incentive posters were designed to improve worker productivity and curb turnover during a time of economic expansion and plentiful jobs. The traditional American virtues the posters promote are as relevant today as they were 80 years ago and represent a unique chapter in American advertising and economic history.While the posters can be seen as workplace propaganda or camp Americana, they are perhaps most importantly viewed as a visual expression of the idealism and optimism of the rising nation. President Calvin Coolidge pithily summed up in two sentences the ideology of the era in his 1925 speech to the society of American newspaper editors: “The chief business of the American people is business...The chief ideal of the American people is idealism.”This attitude sparked a movement known as Welfare capitalism, in which employers voluntarily offered incentives such as reduced hours, higher wages, health insurance, and paid vacations in return for greater productivity and worker loyalty, while blunting the arguments of labor unions and socialists.Charles Mather, a Chicago-based printer seeking to use up excess capacity, saw opportunity in the movement and started selling factory owners subscriptions to his series of bold and beautiful color lithographic posters. The annual “campaigns” found ready acceptance in a workplace accustomed to Madison Avenue advertising techniques in government production posters recently seen during World War I. Mather’s series however, was the first widespread employer sponsored program with the goal of corporate success and employee development.Outstanding American artists such as Willard Frederick Elmes and Hal Depuy were commissioned to boldly employ familiar images such as racing trains, running football players and mischievous clowns alongside simple and direct headlines. Mather’s artists were heavily influenced by the Plakatstil, or "Poster Style", made famous in Germany by Lucian Bernhard and Ludwig Hohlwein. The clean lines of the 1929 Mather posters in turn anticipated the streamlined Art Deco designs that would dominate the next decade.A classic example of the Mather style is “The Perfect Finish” (1929), by Frank Beatty. With its depiction of a sailing crew hard at work during a boat race, and its copy warning “no job’s done till it’s all done,” the poster succinctly communicates the importance of carrying a job through to completion.Employers changed the posters weekly based on current events, holidays or factory problems. A catalog organized the posters by theme, with cautionary categories ranging from laziness, responsibility, mistakes, and rumors to fire prevention and even practical joking. With their fresh graphics, surprising metaphors and over-the-top but thought-provoking platitudes, the posters demanded attention.Mather created approximately 350 different images in seven annual campaigns before the series ended abruptly with the stock market crash in October of 1929. By January 1930, jobs were increasingly hard to find, and employers did not have the funds or the need to motivate workers as they had in the Twenties and the application of these posters in the workplace ultimately dwindled. Today, they are widely collected as icons of this industrious era, and serve as a reminder of the unwavering American work ethic.A native of New Haven, Connecticut, Jim Lapides studied art history at Yale University and has been collecting original vintage posters for more than  two decades.  In 1994, he opened International Poster Gallery on Newbury Street in Boston, which has established itself as one of the world’s leading galleries specializing in vintage poster art. The gallery’s website, www.InternationalPoster.com includes an inventory of more than 5,000 fine posters from around the globe.Joshua Payne info@fuscofour.com 617-363-0405 8 Allenwood Street Boston, MA 02132

You can edit or delete your press release Made in America: The Mather Work Incentive Posters here

03-24-2017 | Health & Medicine
Persistence Market Research Pvt. Ltd
North American Surgical Gowns Market
The North American Surgical Gowns Market report provides in-depth analysis of parent market trends, macro-economic indicators and governing factors along with market attractiveness as per segments. The report also maps the qualitative impact of various market factors on market segments and geographies. The global surgical apparels market is growing at a significant rate due to increasing number of surgeries, and technological advancement in the field. Some of the surgical apparels available
02-02-2012 | Leisure, Entertainment, Miscel …
Fire & Stone
American Super Bowl Delights
Join in with the Super Bowl action and add some touches from across the pond to your life. Celebrate the highly anticipated annual sporting event with a range of American influenced scrummy pizzas at deliciously different restaurant Fire & Stone. Touch down at one of the five restaurants and experience a delightful American treat on Super Bowl Sunday. Examples from the menu: New York: Mozzarella, tomato sauce, crispy smoked bacon, garlic
07-29-2011 | Politics, Law & Society
DJS Advocacies
An American Hero Remains An American Prisoner
George Martorano remains behind bars without recognition of the lives he has saved and his service to society. He is still denied his right to resentencing. (Philadelphia, July 26, 2011) -- Today, Federal Prisoner George Martorano (ID# 12973004) informed us of a major, potentially lethal incident on a Bureau of Prisons flight from Philadelphia to Oklahoma on his way back to Coleman Federal Prison in Florida. George wrestled a handcuff
11-10-2006 | Health & Medicine
PA Hypnosis Center
Celebrating the Great American Smokeout
A free educational seminar on a guaranteed safe and effective way to stop smoking will be held in Pittsburgh. Come see us in person. Learn the method discussed in Oprah Magazine, on TV and radio. On November 16, 2006, from 6:00PM to 8:00PM a free educational seminar will be held to teach the public about how hypnosis can help people quit smoking. Attendees will learn how to kick
01-30-2006 | Leisure, Entertainment, Miscel …
American Reality TV
American Reality TV hits new low with American Idol Slams
American Reality TV www.americanrealitytv.com, a web site covering television and in particlular reality tv shows, is buzzing with activity as new reality shows take over the minds and hearts of America. Recent launches of reality tv programs including American Idol, Beauty and the Geek as well as upcoming premiere episodes of Survivor Panama Exile Island, have caused an increase in activity in posting of articles and comments from reality fans. "American Idol
Comments about openPR
OpenPR ist the nicest and most clearly laid out PR platform I have seen to this day. The press releases are displayed very nicely and clearly and without any unnecessary frills. The updates are fast and the finished release looks appealing and is clearly legible. Even with 16 years of experience one discovers new things from time to time. Congratulations!
Gabriele Ketterl, Director Marketing & PR, Menads