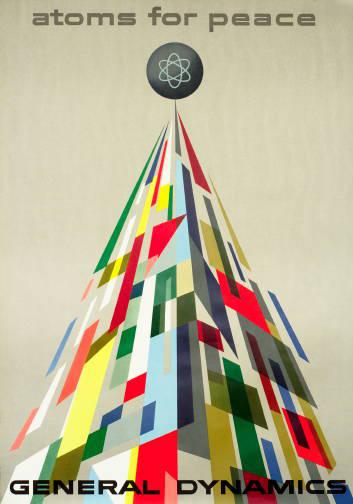 BOSTON, MA - International Poster Gallery (IPG) proudly presents Global Persuasion: Original Mid-Century Modern Posters, a show and sale of original vintage posters from 1945 – 1965. The Mid-Century poster genre, which has seen a meteoric rise in popularity in recent years, encompasses a broad spectrum of motifs and styles that responded to the technological and cultural developments of the post-World War II world. Included in the exhibition are works by such pioneers of Mid-Century design as Armin Hofmann, Herbert Leupin, Erik Nitsche and David Klein. Global Persuasion runs through November 21, 2012 at International Poster Gallery, 205 Newbury Street in Boston. The gallery is open daily from 10am – 6pm and Sunday from noon – 6pm. For additional information, please visit www.InternationalPoster.com or call 617-375-0076.The end of WWII ushered in a long era of peace and prosperity throughout much of the world despite the rising tensions of the Cold War. Populations exploded across the globe, especially in the U.S., Europe and Australia, and increasingly global corporations sought to serve these new consumers. Post-war technology would only accentuate these developments; the widespread arrival of television and the turboprop and then the commercial jetliner would make the world a smaller and more interconnected place.These changes had a profound impact on society, modern culture and advertising methods. Indeed, the prosperous era created a veritable "poster boom" that had two new and distinct styles, one consumer and one corporate. The first was brightly colored and whimsical, the second was rational and orderly, both perfectly adapted to the needs of the times, and both distinct from the Machine Age, Art Deco style that preceded them.The first style, dubbed the Baby Boom, or Fifties Style, became the dominant look of consumer advertising. Artists like Herbert Leupin and Donald Brun in Switzerland, Paul Rand in the US and Raymond Savignac in France created a playful style that appealed to families. Included in Global Persuasion is Herbert Leupin’s colorful 1952 poster for Pelikan, a Swiss manufacturer of fountain pens. The design features the company’s pelican mascot, stylized as a cartoon character in bold, geometric shapes along with photorealistic depictions of Pelikan products. Typical of his work, it reveals a rich, personal universe of characters, symbols and anthropomorphized animals to attract and delight the child in everyone. Leupin’s imagination was as fertile as his celebrated poster predecessor, Leonetto Cappiello, creating everything from stallions that smoke cigars, parrots that hawk grapefruit soda, monkeys, seals and clowns that promote the circus, to friendly trees that greet skiers. With over 80 Swiss Poster of the Year awards, Leupin inspired advertising directors around the world. Consumer services, like consumer products, quickly became fodder for the new advertising style as well. An explosion of new campaigns for popular destinations like Disneyland, New York, Las Vegas and Paris created powerful consumer brands for the dominant airlines. The work of David Klein for TWA and Stan Galli for United was exceptional. Included in the exhibition is Klein’s magical nighttime view of the Hollywood Bowl, a destination that Klein knew well from his time living in Los Angeles. The poster was so successful that the airline printed it twice, first in the late 1950s with a prop plane, then in the early 1960s with a jet, as seen in the exhibition.The second style of the period, the International Typographic, or Swiss Style, was also perfectly suited to the increasingly connected world. Corporations sought international identification and global events such as the Olympics called for universal, pictogram or non-word based solutions. Highly structured, systematic designs were needed to achieve safety, order and clarity on everything from highways and airports to product instructions and catalogs.Influenced by the Bauhaus and Tshichhold’s New Typography, this style developed in Switzerland in the late Forties and Fifties. It employed basic typographic elements with strict graphic rules and often replaced illustration with stark, “modern” photography. The concert posters of Josef Muller-Brockman seen in the exhibit represent the classic apotheosis of this style – cool, elegant and systematically abstract. Another fine example is Erik Nitsche’s “Atoms for Peace” poster for General Dynamics. In 1955, Nitsche became Art Director for the company, a leading multi-division technology firm most famous for building the first nuclear submarine. There, Nitsche created several spectacular series of posters promoting the conglomerate’s various disciplines. “Atoms for Peace” was created shortly after his appointment and was produced for the first International Conference on the Peaceful Uses of Atomic Energy, which took place in Geneva. The conference examined the peaceful applications of atomic technology in a world still shaken by the advent of nuclear weaponry. Nitsche’s poster is notable for having been designed by a corporate participant in the exhibition, and its design reflects the unifying, cross-cultural nature of the event.Like the Baby Boom Style, the use of the International Typographic Style spread rapidly throughout the world, and is still the leading design language of the modern world. “Mid-Century posters, which are exploding in popularity right now, represent a monumental shake-up in the field of graphic design,” comments International Poster Gallery owner Jim Lapides. “These artists adapted to the evolving mentality of post-war consumers with unprecedented style and success and are now securing their status as Mid-Century icons.”Editor’s Note: • Background and additional digital color images available. • Interviews with gallery owner Jim Lapides are encouraged.In addition to gallery shows and special exhibitions, IPG’s award-winning website, www.internationalposter.com offers one of the largest, most comprehensive online collection of vintage advertising posters in the world. Originally launched in 1998, the site contains nearly 5,000 images accessible through a powerful search engine.Fusco & Four 8 Allenwood Street Boston, MA 02132Joshua Payne 617-363-0405

09-17-2018 | Business, Economy, Finances, B …
Market Research Future
Leuprolide Acetate Market Historical Analysis 2018 to 2023 – Top Players as Va …
MarketResearchFuture.com added new report of “Leuprolide Acetate Market”. It contains Company information, geographical Segmentation, in-depth Table of Content, and List of figures, data tables, Various Company Leaders & market synopsis up to 2023 Leuprolide Acetate Market - Scenario: Leuprolide acetate is a synthetic gonadotropin-releasing hormone which is a synthetic nonapeptide acetate salt, used in men to treat symptoms of prostate cancer, and in women to treat symptoms of endometriosis (overgrowth of uterine
09-19-2011 | Arts & Culture
International Poster Gallery
“Proto-Pop: The Elegant Object” at International Poster Gallery
BOSTON, MA - International Poster Gallery (IPG) proudly presents “Proto-Pop: The Elegant Object”, a first-of-its-kind exhibition of original vintage Object Posters from the Twenties to the 1940s, offered as precursors to the controversial and explosive Pop Art movement of the 1960s and 1970s. The exhibition, which is free and open to the public and runs October 6 – November 24, 2011, features 30 posters from Object Poster masters like
07-09-2009 | Arts & Culture
International Poster Gallery
Time Travel: A Century of Travel Posters at International Poster Gallery
BOSTON – International Poster Gallery proudly announces its 16th Annual Summer Poster Show featuring a spectacular collection of original vintage travel posters from the last 100 years. The exhibition runs July 2009 through September 7, 2009. Gallery hours are Monday through Saturday 10 am to 6 pm and Sunday noon to 6 pm. The Gallery is located at 205 Newbury Street in Boston. Travel has been one of
09-12-2007 | Arts & Culture
International Poster Gallery
“Baby Boom: Poster Classics from the Fifties & Early Sixties” At Internatio …
BOSTON – Newbury Street’s International Poster Gallery announces “Baby Boom: Poster Classics from the Fifties and Early Sixties,” a fascinating retrospective exhibition and sale of over 50 consumer advertising posters from the postwar baby boom era. The exhibition opens September 19 and runs through November 18, 2007. Gallery hours are Monday through Saturday 10 am to 6 pm and Sunday noon to 6 pm. The Gallery is
Comments about openPR
OpenPR is clearly structured and remains true to its principle of confining itself to the essential parts. OpenPR has proven to be a very good and reliable partner to our media agency: Within the shortest time the releases are online and go down well with the media representatives. The success of OpenPR is reflected in the steadily increasing number of press releases. It is good that OpenPR exists!
Ursula Koslik, Director Marketing & PR, F+W Hamburg