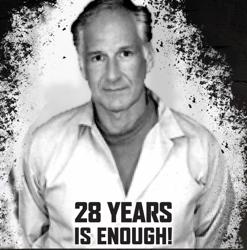 George Martorano remains imprisoned despite years of seeking the justice he deserves.

George Martorano remains behind bars without recognition of the lives he has saved and his service to society. He is still denied his right to resentencing. (Philadelphia, July 26, 2011) -- Today, Federal Prisoner George Martorano (ID# 12973004) informed us of a major, potentially lethal incident on a Bureau of Prisons flight from Philadelphia to Oklahoma on his way back to Coleman Federal Prison in Florida. George wrestled a handcuff key away from another prisoner, stopping what obviously could have turned into an aircraft hijacking, or worse, over American soil. With George’s help, the Federal Marshals took control of the situation and offered George a "pack of crackers" as his reward for possibly saving many lives, both in the air and on the ground. While this incident should be investigated and documented, numerous inquires to the FBI, the Federal Marshal Service, and Homeland Security have resulted in what appears to be their complete denial of the incident. These agencies, which are to be held accountable to all public inquires, have stated repeatedly, that “there is nothing on record” and “this incident never happened.” Taking George’s statements and those of other first-hand witnesses should prove otherwise. But this is not the first time that George Martorano has been denied his rights and recognition of his contributions and rehabilitation “under the law”.The reason that George was on this plane in the first place is that he was returning to Florida from Philadelphia after receiving his 33rd denial in his request to be resentenced after serving 28 years of a life sentence without parole for a first-time, non-violent offence committed in the early 1980s. This July, the District Court of Philadelphia’s Judge Gene Prater felt justified in denying George’s request for resentencing even though he has a perfect prison record and has proven his rehabilitation, which, under Federal law, must be taken into account. George is a certified Federal Department of Corrections “Member of the Inmate Companion Suicide Watch Team” through which dozens of Federal prison inmates have been saved with his help and assistance. In his service as a working inmate, he has developed his own, documented methodologies to assist in suicide prevention. George also established a popular course titled "The Write to Life" in which he teaches fellow inmates creative writing skills. He is also the author of more than 23 books, 10 plays, and countless short stories and poems.George Martorano has more than served his debt to society. This time he saved a Federal Aircraft, its Marshals, and its prisoners as well as avoiding the extreme possibility of harming innocent citizens on the ground. Yet, what is his reward for his compassion, his service to society, and his bravery in this incident…a continued, illegal sentence of life behind bars without the possibility of parole. # # # For press and media inquiries, contact DJS Advocacies at (305) 586-4022 or advocacy@djs-marketing.com.For more information about George Martorano and his quest for justice, log-on to www.webelievegroup.com, www.freegeorge.us, and www.facebook.com/freegeorgemartorano.justicecampaignDJS Advocacies was started in 2008 as a way to help ordinary people obtain justice. This is a non-profit advocacy subsidiary of DJS Marketing Group, a.k.a. DJS-3S0P.DJS Advocacies 2298 Coral Way Miami, FL 33145Press Contact: Deborah Scarpa

03-31-2021 | Business, Economy, Finances, B …
Fxcanva
George Prethesh - A Successful Forex trader
In the present serious world, the web is the best friend Of Hasty Humans. Numerous youthful business visionaries are offering significance to their lives through Digital Marketing Profession, A Guy From Kerala Named George Prethesh is a Forex Market analyst and a Trader. George Prethesh is an experienced Forex analyst, and he is the co-founder of forexcation.com, investing.lk, and fxprofund.com. Also, he has experience in SEO, CMS & Digital Marketing. He considers
09-23-2020 | Arts & Culture
Hamburg Mawingu Collection (HMC)
George Lilanga: A very rare opportunity
George Lilanga still considers also 15 years after his death as one of the most significantly contemporary African artists. Now a very rare opportunity presents to acquire one of the most important late works of the artist. At the October 8, the big-painting Village at the lake is for sale in a big Africa auction with Bonhams in London. The painting belongs to the late favourite works of the artist. Lilanga
10-10-2012 | Business, Economy, Finances, B …
Banyan Air Service
George Tucker Joins Banyan Air Service
George Tucker recently joined Banyan Air Service as the Director of Banyan Pilot Shop. He is responsible for the leadership and growth of the Pilot Shop and banyanpilotshop.com including marketing strategy, supply chain, inventory and management. “We are excited that George has joined the Banyan team. Given his extensive background in e-commerce and on-line marketing, we anticipate that he will increase our market share through new relationships
06-07-2010 | Industry, Real Estate & Constr …
BluSky Marketing
Stephen George & Partners launch green reference guide
Leading architectural practice, Stephen George & Partners, who have a passionate interest in sustainable architecture, have just launched an easy to use and easy to understand guide on selecting sustainable building materials. The Stephen George & Partners Guide to Building Materials and the Environment is a comprehensive, practical and interactive guide. It was originally intended to help designers consider the environmental implications of commonly (and occasionally not-so-commonly) specified materials.
11-13-2008 | Industry, Real Estate & Constr …
Core Architecture + Design
George L. Scammell, ASID, IIDA, JOINS CORE
Firm's Newest Partner to Grow Hospitality Sector Practice [Washington, DC, November 10, 2008] - Internationally recognized architecture and design firm CORE announces the arrival of George L. Scammell, ASID, IIDA, as the firm’s newest principal. Established in 1991 by Dale Stewart, AIA, and Peter Hapstak III, AIA, IIDA, ISP, CORE architecture | design welcomes George into a dynamic team that also includes Guy Martin, AIA, who joined as a partner
07-10-2007 | Arts & Culture
GeoPoint Systems / OnCell Audio
OnCell Reaches Agreement with George Eastman House
Rochester, NY, July 10, 2007 – GeoPoint Systems, Inc., the leading provider of on-demand, location-based multimedia content to cell phones and other mobile devices, announced today that an agreement has been reached with the George Eastman House International Museum of Photography and Film, located in Rochester, New York. Through their OnCell Audio service GeoPoint will provide cell phone audio tour service to the 58-year-old Eastman House. The Eastman House is
Comments about openPR
9 o'clock: discuss press release with client, 10 o'clock: submit release to openPR, within the briefest possible time release is published and displayed in a prominent place on openPR.de. I am thrilled!
Zehra Spindler, Calypso Now! - Communication Agency