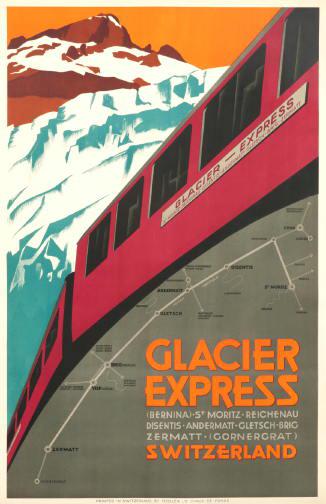 International Poster Gallery (IPG) proudly presents Winter Wanderlust, the gallery’s 19th annual holiday poster show featuring travel posters for exotic locales in addition to a selection of general works by renowned poster artists. From exotic beach resorts along the French Riviera to romantic railway excursions along the snow-capped peaks of Switzerland, the exhibition provides a tour of adventurous destinations unlike any other. Winter Wanderlust runs December 1 – January 31, 2012 at International Poster Gallery, 205 Newbury Street in Boston. The gallery is open daily from 10am – 6pm and Sunday from noon – 6pm. For additional information, please visit www.InternationalPoster.com or call 617-375-0076.   Highlighting the show is a dizzying 1930 Art Deco poster for Glacier Express by an unknown artist. The poster advertises the first running of the line, which is one of Switzerland’s most popular tourist attractions. Dubbed “the world’s slowest express train,” it averaged around 22mph on a spectacular 8-hour journey from Zermatt to St. Moritz. Still running today, the train passes over 291 bridges and through 91 tunnels on a narrow-gauge track that originally was passable only in summer. The low vantage point of this poster captures the drama of this epic journey through the steep mountain passes of the Alps.Also featured is Sascha Maurer’s 1936 poster for the New Haven Railroad Ski Trains. The trains, which began operating in 1933, were self-contained ski trips on wheels in which the train itself served as the lodge, complete with a dining car for meals. More than any other artist, Sascha Maurer’s posters captured the public’s imagination for the slopes with bright and stylish designs. Trained in modernist design in his native Germany, Maurer’s streamlined images provided one of the few bright spots for the beleaguered American railroads during the Depression.More temperate destinations are represented in Marcello Dudovich’s circa-1930 poster for Venezia Lido, a 7-mile populated sandbar located in Venice, Italy. The Lido was, and continues to be, home to luxurious hotels, private summer villas and beautiful public and private beaches. Notably, the term “Lido Deck,” used commonly to describe swim and lounge areas on cruise ships, is thought to have originated with English travelers returning from their stay at The Lido. An Art Deco gem, Dudovich’s design pictures an anonymous beauty, between swims in bathing suit and cap, taking in a picturesque view of Venice. Striking works like this secured Dudovich’s position as a progenitor of Italian poster design, and led him to a successful career as a commercial artist and painter.The exhibition also includes more recent entries, such as François Boisrond’s 1996 design for Le Club 55, a Saint-Tropez hotspot. Saint-Tropez remained relatively unknown as a tourist destination until the mid-1950s when the French film And God Created Woman was shot in the small fishing town, an ideal filming location along the French Riviera. The film, starring model/actress Bridgitte Bardot, ignited a robust tourist economy in the town following its release. Le Club 55 was originally a modest canteen frequented by the film’s crew, but evolved with the rest of Saint-Tropez to become one of the its trendiest beach clubs. Boisrond’s poster aimed to reinvigorate public interest in the historic locale, and is executed with bold reds, yellows and blues in a highly playful style.While Winter Wanderlust focuses primarily on vintage travel posters, the show also includes a variety of works in other categories. Jean d’Ylen’s 1925 poster for Sandeman port wine is a fine example. Founded in 1790, Sandeman expanded on an international scale thanks to creative advertising like d’Ylen’s, and is still a prestigious brand today. His dreamlike poster portrays a leaping centaur, a bottle of Sandeman port in each hand, with a woman draped across his back. Her dress and hair, in striking green and red, respectively, cast a flash of contrasting color across the design’s otherwise monochromatic palette, making this one of d’Ylen’s most eye-catching and bewitching creations. “Winter Wanderlust has given us the chance to showcase some new and extraordinary additions to our collection,” comments International Poster Gallery owner Jim Lapides. “We also have a broad selection of pieces for those looking to chip away at their holiday shopping lists. From full sized posters to more affordable small graphics and luggage labels, these are sure to be unique and unforgettable gifts.”In addition to gallery shows and special exhibitions, IPG’s award-winning website, www.internationalposter.com offers one of the largest, most comprehensive online collection of vintage advertising posters in the world. Originally launched in 1998, the site contains nearly 5,000 images accessible through a powerful search engine.Fusco & Four 8 Allenwood Street Boston, MA 02132Joshua Payne info@fuscofour.com 617-363-0405

12-14-2018 | Industry, Real Estate & Constr …
Manies Construction
Winter Home Maintenance Guide
Keep your home in tip top shape this winter by performing this list of maintenance tasks to keep your family warm & safe all winter long. If you own a snow blower, be sure to check the manual for any routine pre-season maintenance suggestions. Also, make sure you have easy access to your shovel and have plenty of kitty liter on hand to help prevent slips. (this will not harm
03-30-2016 | Arts & Culture
Jeffrey Breslow Gallery
Magnetism | Meg Frazier + Morgan Winter
Chicago, IL - April 15, 2016, 5p - 8p- Magnetism | Meg Frazier + Morgan Winter. The Jeffrey Breslow Gallery celebrates a unique collaborative exhibition of work by Meg Frazier and Morgan Winter. The show, titled Magnetism, represents the unseen yet tactile energy that exists when two distinct styles approach artistic compositions as one. Meg Frazier, known for her bold brush strokes trickled throughout her abstract style, and Morgan Winter,
03-03-2016 | Fashion, Lifestyle, Trends
G2O Spa + Salon
Winter Rescue
WHAT: While spring is almost in the air, the harsh effects of winter can still be felt on skin and hair. This March, G2O Spa + Salon, Boston’s award-winning day spa and salon on Newbury Street, is reversing the winter woes with complimentary treatments that will rescue hair, skin and nails, and spring everyone’s beauty regime back to life.
11-26-2011 | Fashion, Lifestyle, Trends
Enliten, LLC
Enliten's Winter Release 2011-12
Enliten has announced its annual release and sale for Black Friday. The release has over 20 new additions, including women's apparel for the first time in company history. The new release features a collection of basics with their iconic logo and name on t-shirts, hoodies, and crew neck sweatshirts. To accentuate, the crewneck sweaters have detailed stitching across the lateral body and cross stitching at the neckline. For women, V-necks and
05-13-2011 | Fashion, Lifestyle, Trends
Bastyan Fashions limited
Bastyan Autumn/Winter 2011/12
The latest Autumn/Winter collection from Bastyan is a rich mix of sumptuous colours and tactile textures sitting against silhouettes that evoke a nostalgic almost cinematic feel. Owner and founder Tonia Bastyan designs for the modern woman who wants more than just trend from her wardrobe, she offers her a mix of well cut items which transcend seasons and give a feeling of comfort and quality without compromising on design. The coat collection
01-07-2011 | Sports
Destination Vietnam
Hanoi Winter Golf Promotion
Valid from 1Jan - 28 Feb 2011 Discover Vietnam- The undiscovered Golf Destination Mua Dong – Winter of Hanoi is really something special and admirable Hanoi has 4 different seasons which are very different with the South East Asia countries and it is even much different in winter In winter, you could feel the coldness from the wind blowing from North where Vietnam bordered with China especially on the Golf courses. That is why,
Comments about openPR
We publish our press releases on openPR.de because we like people who are "open" - just like us.
Frank Obels, CEO, INCONET - Informationssysteme, Communication und Netzwerkberatung GmbH