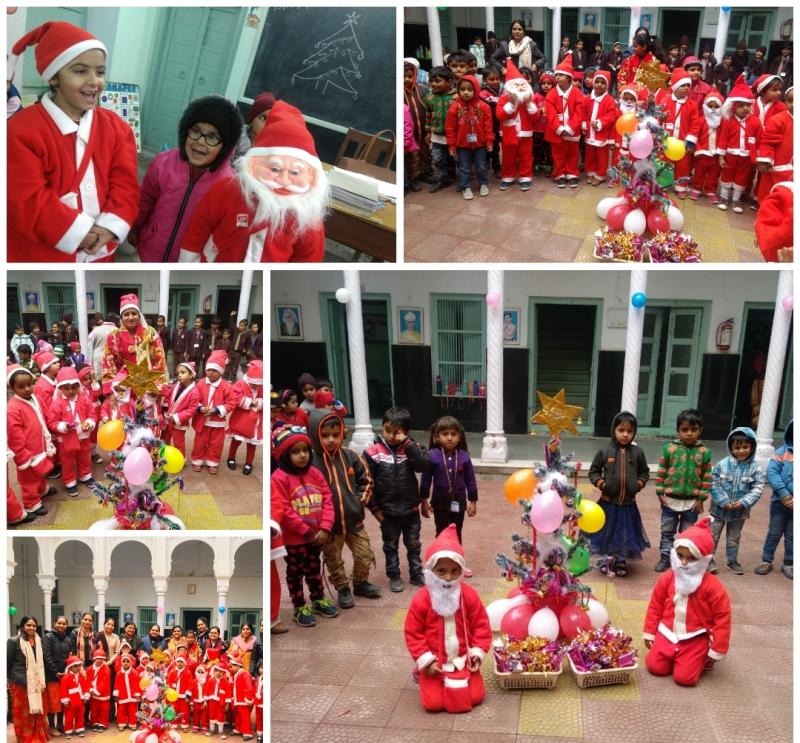 Appreciated by one and all, Smt Jamuna Mishra Academy – JMA Pilani established in 2004 firmly believes that to be top ranking, it is the foremost responsibility of any Indian educational institution to nurture humans with the tolerant and harmonious view of life as envisaged in the Indian culture the spirit of which has been beautifully captured in the Indian Constitution by the founding fathers of the nation. The diversity among students and teachers in the school brings out a mini India echoing the lines of Gurudev Rabindranath Tagore in National anthem “Panjaba-Sindhu-Gujarata-Maratha Dravida-Utkala-Banga.”The rich ethnic diversity of India truly comes alive when the school celebrates various festivals such as Raksha Bandhan, Janmasthami, Ganesh Chaturthi, Navratra Dandiya & Garba, Diwali, Guru Nanak Jayanti, Eid al Fitr, Christmas, Lohri, Basant Panchami and Holi. During these celebrations, the students and teachers of JMA Pilani add a spectrum of colours and gaiety to school life and indeed rise above caste and creed as well as develop mutual respect for all religions.It is a matter of great pride that alumni of Pilani are presently pursuing higher education in various institutions which include Banasthali Vidyapith which is not only in various QS Rankings but also in Times Higher Education THE World Rankings as one among the best 3 - 4% global universities as well as Second Best Women’s University in the world and Birla Institute of Technology and Science BITS Pilani which is one of the Institutions of Eminence.JMA Pilani like previous years organized a colorful function to celebrate Christmas in the school premises. With dozens of children dressed as Santa Claus, the entire school looked like a riot of colors. With students singing and dancing to various popular carols which included all time favorites Jingle Bells, the courtyard of the school became a dance floor. When Ms Sarita Jangir a popular teacher among the kids dressed up as Santa Claus joined the singing and dancing, the merry making went exponential.When the Christmas celebrations ended after an extended round of chocolates and cake as well as umpteen selfies, the students and teachers of JMA were seen with beaming faces and pride that they were indeed part of an institution which is a shining jewel in the crown among the schools at Pilani.For more details about JMA Pilani see http://www.jmapilani.org/Default.aspxMrs Booma Natarajan, M.Sc., M.A., B.Ed. Principal, Jamuna Mishra Academy – JMA Near Old Pilani Post Office Pilani Rajasthan 333031 India Phone 91-1596-242314 Email booma_pilani at yahoo.co.in Website: http://www.jmapilani.org/Default.aspx FaceBook: https://www.facebook.com/JMAPilaniRajasthanRank1/About JMA Pilani: Jamuna Mishra Academy - JMA Pilani is a Co-educational English Medium School with Experienced Teachers, Spacious Classrooms and Modern Amenities designed to impart Quality Education combined with All Round Personality Development and lay the Best Foundation for the Child’s Future. While the school admits both boys and girls, the girl student enrollment has been steadily rising every year and is presently nearly 50% of the total strength. Right from its inception, JMA Pilani has embarked on a rich tradition of celebrating various days of national and international significance and festivals which makes it a cut above the rest schools in Pilani. The school has for boys and girls Scout and NCC, girls’ band which has been winning laurels every year. NCC cadets of JMA Pilani have also been selected for participation in Republic Day Camp RDC and Shivaji Trail Trek. Yoga, Karate, Painting and Music are not just part of school routine but a way of life for the students. It is a matter of great pride that JMA Pilani is referred popularly as the School with 100% Results on account of outstanding results year after year in Board of Secondary Education Rajasthan RBSE Class X and Class 12.

12-14-2017 | IT, New Media & Software
GamerKeyz
GamerKeyz Christmas
GamerKeyz just opened we buy game key codes in bulk so you pay less for the games you love. For Xmas we are offering buy one game get one free until Xmas day! For every game you buy you will receive a random Steam game key which will be delivered to your inbox on Xmas morning. We have 680 Steam games for sale now, we are about to add Origin
12-28-2010 | Fashion, Lifestyle, Trends
Phuket Ocean Villas Co. Ltd.
Christmas in Phuket
Phuket, Thailand: Thailand is a 95% Buddhist country so Christmas is not a festival that officially appears in the Thai calendar, but with a large ex-pat community and Thais who love an excuse to have fun, Christmas is celebrated in fine spirit every year - especially in Phuket. In fact, they started playing Christmas carols in Phuket’s Tesco on 19th November which took me by surprise. Then I noticed the frozen
12-23-2010 | Health & Medicine
IndianDiabetics
Christmas Celebration with Indiandiabetics
Enjoy Christmas, it is a time for celebration and eating for everyone…a little of what you fancy over Christmas will definitely do you good…an odd high glucose reading shouldn't affect your long term control or health or health. 1. Stick with sugar free or diet drinks, or fresh fruit juice only with meals. Fresh fruit juice has lots of natural sugar which will send blood sugars high if taken. 2. Save your selection boxes
12-22-2010 | Politics, Law & Society
Michael Prell
Merry Christmas
’Tis The Season To Celebrate The Annual Festive Tradition Of Refusing To Call Christmas “Christmas.” 68% of Americans say they prefer to be greeted with “Merry Christmas” and not “Happy Holidays” and yet each year the Anti-Christmas Brigade takes to the streets, and takes to the airwaves, to protest against Americans calling Christmas by its name. Why is that? Sometimes the best way to understand why people do what they do is to
11-12-2010 | IT, New Media & Software
DealAbout.com.au
Special Christmas Gift Ideas
A special Christmas feature has been added to Dealabout.com.au web store under which an innovative gift idea will be revealed each day starting 01/11/2010 until 31/12/2010. The manager of this store said customers who are looking for an effective way to hunt for Christmas gifts can greatly benefit from this segment. “A boring gift is the last thing you would want to give to your loved ones in Christmas,”
11-24-2009 | Energy & Environment
TiSUN Gmbh
Last Christmas
The Tyrolean solar specialist keeps it Christmas promise. TiSUN has donated a solar system to the children at the Mordecai orphanage in Port Elizabeth (South Africa) and had it fully installed, free of charge. A project to improve health conditions for orphans who have lost their parents to AIDS has now been carried out. The system became operational in early September and provides hot water for two showers and a bathtub.
Comments about openPR
I can't but agree to the positive statements about your portal: easy to use, clear layout, very good search function, and quick editing!
Jens O'Brien, Borgmeier Media Communication