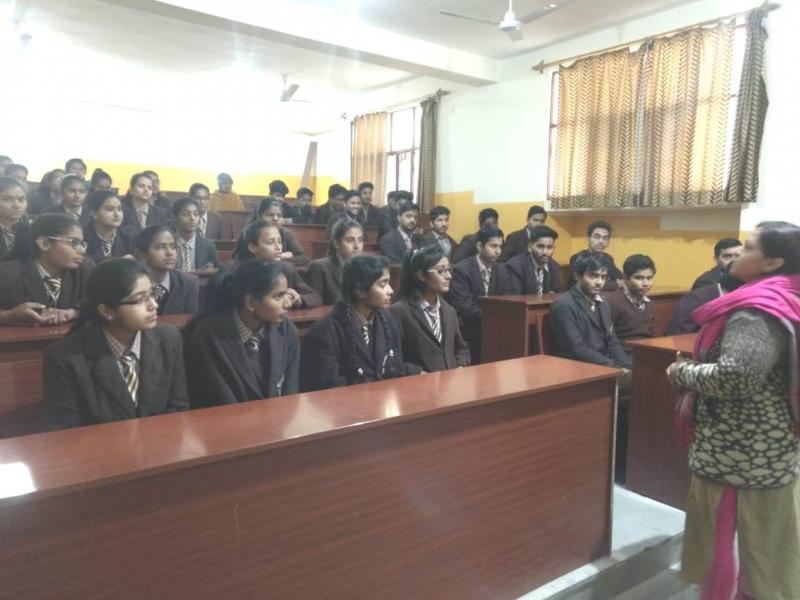 It is a matter of great pride that alumni of Smt Jamuna Mishra Academy JMA Pilani are presently pursuing higher education in various institutions which include Banasthali Vidyapith which is not only in various QS Rankings but also in Times Higher Education THE World Rankings as one among the best 3 - 4% global universities as well as Second Best Women’s University in the world and Birla Institute of Technology and Science BITS Pilani which is one of the Institutions of Eminence.JMA established in the year 2004 at Pilani which is considered as Oasis in the desert state of Rajasthan has set a rich tradition of celebrating various days of national as well as international importance on a regular basis. Chemistry can be defined as a discipline encompassing all areas which are of interest to chemists and where molecular science makes significant contributions. The rich and diverse world of modern chemistry encompasses remarkable intellectual accomplishments, scientific creativity and originality and the generation of new knowledge.Considering the fact that chemistry indeed promotes sustainable development as well as provides solutions to global challenges in energy, education, agriculture and health, on 20 December 2017, during its 74th Plenary Meeting, the United Nations (UN) General Assembly 72nd Session proclaimed 2019 as the International Year of the Periodic Table of Chemical Elements (IYPT 2019). Chemical Elements play a vital role in every one’s daily lives and are crucial for humankind, planet as well as for industry. Periodic Table is a unique tool enabling scientists to predict the appearance and properties of matter on Earth and in the Universe and its development is one of the most significant achievements in science and a uniting scientific concept, with broad implications in Astronomy, Chemistry, Physics, Biology and other natural sciences. IYPT 2019 coincides with the 150th anniversary of the discovery of the Periodic System by Dmitry Mendeleev in 1869. In addition IYPT 2019 also coincides with the Centenary of International Union of Pure and Applied Chemistry IUPAC thus making it a stellar constellation.IUPAC serves the international scientific endeavor in the dual function of a basic science and a mission-oriented Union. The Union is in a unique position to contribute to the central interdisciplinary chemical sciences. Strengthening international chemistry, striving towards inspiring high standards of excellence and relevance in academic and industrial research and promoting the service of chemistry to society and to global issues, these are the visions that shape IUPAC’s activities towards the 21st century.On 23 Dec 2019 JMA Pilani organized a function to celebrate IYPT 2019 and IUPAC100. Chemistry teacher Ms Chitralekha shared above details and highlighted element 101 Mendelevium named after Dmitri Mendeleev, father of the periodic table of the chemical elements and 106 Seaborgium named after the American nuclear chemist Glenn T. Seaborg. Principal Mrs Booma Natarajan who herself is a passionate Chemistry teacher shared interesting details about various Nobel prizes in chemistry which included USA Germany and UK topping the list, Frederic Sanger winning twice for Chemistry and 5 women winners Marie Curie, Irene Curie, Doroth Hodgkin, Ada Yonath and Francis Arnold (chemical engineer !!). . For more details about JMA Pilani see http://www.jmapilani.org/Default.aspxMrs Booma Natarajan, M.Sc., M.A., B.Ed. Principal, Jamuna Mishra Academy – JMA Near Old Pilani Post Office Pilani Rajasthan 333031 India Phone 91-1596-242314 Email booma_pilani at yahoo.co.in Website: http://www.jmapilani.org/Default.aspx FaceBook: https://www.facebook.com/JMAPilaniRajasthanRank1/About JMA Pilani: Jamuna Mishra Academy - JMA Pilani is a Co-educational English Medium School with Experienced Teachers, Spacious Classrooms and Modern Amenities designed to impart Quality Education combined with All Round Personality Development and lay the Best Foundation for the Child’s Future. While the school admits both boys and girls, the girl student enrollment has been steadily rising every year and is presently nearly 50% of the total strength. Right from its inception, JMA Pilani has embarked on a rich tradition of celebrating various days of national and international significance and festivals which makes it a cut above the rest schools in Pilani. The school has for boys and girls Scout and NCC, girls’ band which has been winning laurels every year. NCC cadets of JMA Pilani have also been selected for participation in Republic Day Camp RDC and Shivaji Trail Trek. Yoga, Karate, Painting and Music are not just part of school routine but a way of life for the students. It is a matter of great pride that JMA Pilani is referred popularly as the School with 100% Results on account of outstanding results year after year in Board of Secondary Education Rajasthan RBSE Class X and Class 12.

05-10-2021 | Industry, Real Estate & Constr …
Markilux
A challenging year
markilux with an increase in turnover despite the corona virus pandemic The coronavirus turned the world upside down in 2020. Companies had to completely reorganise their work processes from one moment to the next. And markilux was no exception. The awning manufacturer transformed its production, introduced mobile, digital working for its employees and mobilised end consumers via a 'social distancing campaign'. According to markilux, it was a tour de force, but
01-25-2017 | Sports
The Active Hands Company Ltd
New Year, New Office
This week began an exciting new chapter for Active Hands - we moved into our new office at Rumbush Farm in Solihull! The new office is set in the countryside, but handily located just off the M42, perfect for both the local dispatch team and for those of us who travel from Leamington/Warwick. Up until now our business has been run from our homes but have now out-grown this solution,
12-14-2016 | IT, New Media & Software
OAK Consulting FZC
2017 the year of…..
A comment article by Alastair Paterson, CEO and Co-Founder, Digital Shadows As we approach the year-end attention of course turns to what we can expect to see in 2017 and what we are security professionals need to be prepared for. In many ways, 2016 was very much the ‘Year of the Ransomware Threat’, and it is very hard to see that changing much next year. After all most cybercrime is driven by
06-09-2016 | Industry, Real Estate & Constr …
BlueCielo ECM Solutions
BlueCielo Achieves Strong Year on Year Growth
The company’s trusted software suite, expanded business consultancy services offering and the launch of a SaaS solution for engineering collaboration are all contributing factors to its continued success. BlueCielo ECM Solutions, a leading global software provider of Engineering Information Management (EIM) and Asset Lifecycle Information Management (ALIM) solutions, announced today that it has released its 2015 Annual Report. The 2015 report, which includes the company’s financial statements, shows strong performance
12-30-2008 | Associations & Organizations
New Believers Missionary Baptist Church
New Believers' Year End Review
December 29, 2008 – Bishop Veynell Warren, D.D. is the Senior Pastor of the New Believers Missionary Baptist Church and Soul Survivor Ministries in the southern sector of Dallas, Texas where the word of God is being ministered to the community. On any given Sunday the electrifying and elevating presence of the Lord can be felt in the House. Make no mistake this is not an easy task,
04-14-2008 | IT, New Media & Software
Arcadia, Inc.
Arcadia celebrates 15-year anniversary
Arcadia Inc., one of the leading Russian providers of consulting services and software development services for the international clientele celebrates 15-year anniversary on the 9th of March, 2008. The company was founded by Arcady Khotin in 1993 and is one of the first IT-companies in Saint-Petersburg. The history of Arcadia is the history of success. Undoubtedly, we faced a lot of difficulties on our way to it. Together we had
Comments about openPR
I can't but agree to the positive statements about your portal: easy to use, clear layout, very good search function, and quick editing!
Jens O'Brien, Borgmeier Media Communication