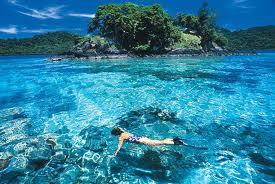 According to the Tourism Authority of Thailand (TAT), international tourist arrivals in Thailand have jumped by 24.36% to 8.2 million. They were mainly from the United States, Russia, India, China and Japan. The TAT also reports that revenue generated by tourism will reach 600 billion baht by the end of the year. They will soon be increasing their marketing efforts to target European first-time visitors, particularly from the United Kingdom and Germany.Phuket has also seen an increase of 36.58% in international visitors, mainly from Russia and Asia. “More tourists are heading to Phuket not just for its inexpensive lifestyle and shopping, but also to relax and enjoy the surroundings of nature,” commented Jarrat Beaumont, Group Sales Director of Castlewood Group, a commercial real estate developer based in Singapore. There is something for everyone on the island of Phuket, and the surrounding islands nearby; day trips are available to the Phi Phi Islands with their 20km of coral reefs some of which are up to 12 meters deep. The best diving and snorkeling sites are on one of the larger Islands; Phi Phi Don as this offers some of the shallower and more colorful reefs.The Phi Phi Islands, made up of 6 islets altogether are now a famous tourist attraction some 40 km away from Phuket actually belonging to the province of Krabi rather than Phuket as many people assume.There are many festivals throughout the year in Phuket which can be enjoyed by every nationality; Songkran is one of the most popular as it is traditional Thai New Year and commonly known as the ‘water throwing festival’. Chinese New Year is also celebrated in Phuket although on a smaller level than Thai New Year. The most popular food festivals are the Phuket Seafood Fiesta running throughout the month of August in various locations on Phuket and also the Vegetarian Festival from 26th September to 6th October 2011.Of course one of the main attractions for tourists is the beautiful white sand beaches in Phuket, there are so many that some of them are still relatively unknown and rarely visited by tourists. Whether people are looking for the hustle and bustle of Patong Beach with its motorized water sports and busy beach bars and shopping or the more laid back, quiet beaches of Bang Tao and Surin favored by many, there is something for everyone.The 8over8 hotel, a project by Castlewood Group, will be situated in Phuket near the beautiful Bang Tao Beach and Laguna Resort, and is scheduled for completion by the end of 2012.Castlewood Group are a commercial real estate company based in Singapore. They are building their first 8over8 hotel in Phuket, followed by Koh Samui and Bali.Castlewood Group Pte Ltd 391A Orchard Rd, #12-01,Ngee Ann City Tower A Singapore 238873 Tel: +65 6303 0888 Fax:+65 6303 0889news@castlewoodgroup.com http://www.castlewoodgroup.com

You can edit or delete your press release Phuket; Tourism Hub here

12-22-2011 | Tourism, Cars, Traffic
Castlewood Group Pte Ltd
Increasing Tourist Arrivals to Phuket
A surge in tourist arrivals at Phuket International Airport in 2011 has been welcomed by many of the Islands hotels. However long passenger queues caused by extra international arrivals have been cause for concern; what measures has the airport put in place to combat these problems? According to recent statistics from Phuket International Airport, the number of passengers at the airport had reached more than 5.6 million in the first eight
12-10-2011 | Industry, Real Estate & Constr …
Castlewood Group Pte Ltd
Strong Hotel Performance in Thailand during 2011
One of the fastest growing Thai holiday destinations is Phuket. Approximately five-million people visit this fascinating and picturesque Asian wonder annually, report Castlewood Group a leading commercial real estate company. Some of the best sandy beach resorts, night life and dining opportunities are to be found in Phuket. According to the Managing Director of STR Global, Elizabeth Randall, occupancy in the Asia-Pacific region in July 2011 had reported the highest monthly
11-07-2011 | Industry, Real Estate & Constr …
Castlewood Group Pte Ltd
Phuket: Still Going Strong despite Severe Weather Conditions in Other Areas of T …
The current flood situation in Bangkok has not affected Phuket. In fact, the tourism industry in Phuket is performing better than last year, according to Mr Bhuritt Maswongsa, Vice President of Marketing for Phuket Tourist Association (PTA). Resorts and hotels in Phuket have also reported strong bookings in November and December. The hotel occupancy rates in November and December 2011 are 75% and 90% respectively. Phuket is still doing well
10-07-2011 | Associations & Organizations
Castlewood Group Pte Ltd
Thailand Promotes Itself as New Luxury MICE Destination
The Thailand Convention and Exhibition Bureau (TCEB) are expecting 720,000 MICE (meetings, incentives, conventions and exhibitions) visitors to Thailand this year which will generate US $1.9 billion in revenue. Over the past two years, the MICE tourism in Thailand had grown tremendously. According to Akapol Sorasuchart, the President of TCEB, Thailand is now positioning itself as the new luxury MICE destination. This is due to the paradigm shift in the