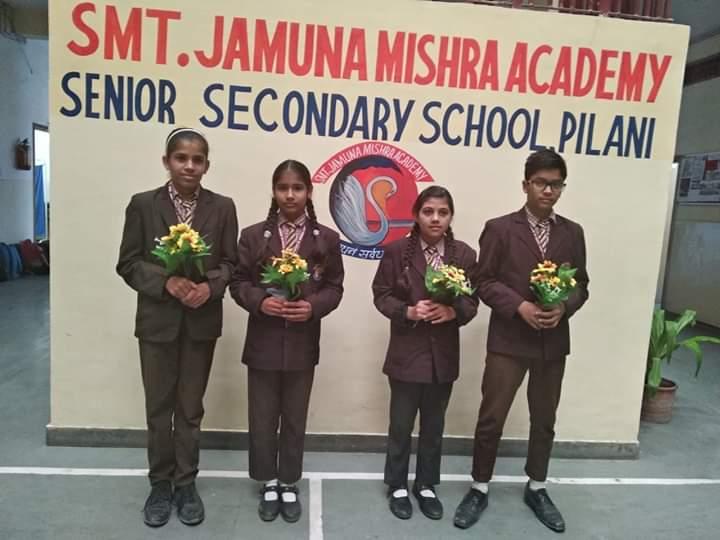 Smt Jamuna Mishra Academy – JMA was established in the year 2004 at Pilani in Shekawati which is considered as Oasis in the desert state of Rajasthan. Matter of Pride that alumni of JMA Pilani are presently pursuing higher education in various institutions which include Birla Institute of Technology and Science BITS Pilani which is one of the Institutions of Eminence and Banasthali Vidyapith which is not only in various QS Rankings but also in Times Higher Education THE World Rankings as one among the best 3 - 4% global universities as well as Second Best Women’s University in the world. December 4 is celebrated as the Indian Navy day to commemorate Operation Trident which was launched by the Indian Navy to attack Karachi harbor during the war of 1971 that broke out between India and Pakistan. The operation was carried out on the intervening night of December 4 and 5 and had caused heavy damage to Pakistan’s vessels. It was during the Trident Operation that an anti-ship missile ship was used for the first time. Nearly 300 soldiers laid down their lives and around 700 were injured during the course of this particular operation. During Operation Trident, the Indian Navy sank four Pakistani vessels and severely damaged Karachi harbor fuel fields. The theme for celebrations for 2019 is ‘Indian Navy Silent, Strong and Swift’. With many children of defence personnel enrolled in the school, JMA Pilani organized a brief function on 4 Dec 2019 to celebrate Navy Day and felicitate the children of Navy men enrolled in the school. Principal Mrs Booma Natarajan addressed the students and shared the significance of the day with above details. For more details about JMA Pilani see http://www.jmapilani.org/Default.aspxMrs Booma Natarajan, M.Sc., M.A., B.Ed. Principal, Jamuna Mishra Academy – JMA Near Old Pilani Post Office Pilani Rajasthan 333031 India Phone 91-1596-242314 Email booma_pilani at yahoo.co.in Website: http://www.jmapilani.org/Default.aspx FaceBook: https://www.facebook.com/JMAPilaniRajasthanRank1/About JMA Pilani: Jamuna Mishra Academy - JMA Pilani is a Co-educational English Medium School with Experienced Teachers, Spacious Classrooms and Modern Amenities designed to impart Quality Education combined with All Round Personality Development and lay the Best Foundation for the Child’s Future. While the school admits both boys and girls, the girl student enrollment has been steadily rising every year and is presently nearly 50% of the total strength. Right from its inception, JMA Pilani has embarked on a rich tradition of celebrating various days of national and international significance and festivals which makes it a cut above the rest schools in Pilani. The school has for boys and girls Scout and NCC, girls’ band which has been winning laurels every year. NCC cadets of JMA Pilani have also been selected for participation in Republic Day Camp RDC and Shivaji Trail Trek. Yoga, Karate, Painting and Music are not just part of school routine but a way of life for the students. It is a matter of great pride that JMA Pilani is referred popularly as the School with 100% Results on account of outstanding results year after year in Board of Secondary Education Rajasthan RBSE Class X and Class 12.

03-12-2020 | Business, Economy, Finances, B …
MarketsandMarkets
Increasing Demand of UUV's From Navy Applications
"AUV market is expected to grow at higher CAGR during the forecast period." Based on type, the unmanned underwater vehicle market has been segmented into Remotely Operated Vehicle (ROV) and Autonomous Underwater Vehicle (AUV). The growth of the market can be attributed to the rising number of deep-water offshore oil & gas production activities and increasing maritime security threats. For AUV the growth mainly attributed to the increasing usage of AUVs
11-27-2018 | Business, Economy, Finances, B …
Insurance Navy
Insurance Navy Offers $50 Roadside Assistance
FOR IMMEDIATE RELEASE Contact: Anel Herrera Aherrera@insurancenavy.com Insurance Navy Offers $50 Roadside Assistance Palos Hills, Illinois- November 27, 2018- Insurance Navy is offering roadside assistance for $50 per six-month term. With roadside assistance, drivers are able to drive confidently and travel stress-free. Roadside assistance is a service Insurance Navy offers that is added onto an existing insurance policy. It provides assistance if a vehicle has mechanical problems while on the road. Roadside assistance
07-24-2018 | Associations & Organizations
SMi Group
Royal Navy, US Navy, DSA, Swedish Armed Forces, Royal Australian Navy, US Marine …
The Defence Safety Conference http://www.defencesafety.com/openpr, taking place at the Copthorne Tara Hotel, Kensington, London on the 1st and 2nd October 2018, will feature high level briefings from senior leaders on maritime safety. Conference organisers SMi Group are delighted to announce that the following speakers will all share their organisations priorities, challenges and solutions when it comes to enhancing maritime safety for the future: • Vice Admiral Ben Key, Fleet Commander, Royal Navy • Rear Admiral
03-20-2017 | Fashion, Lifestyle, Trends
Vision Strike Wear
US Navy Chiefs at SLF Norfolk Receive Their Navy Dolphin Shirts
When the Navy Chiefs at SLF Norfolk wanted the best in shirts for their Sailors they turned to Vision-Strike-Wear.Com The US Navy surface fleet like its big boys need constant protection from threats above and below the surface. The Mater Chiefs, Senior Chiefs and Chiefs of the United States Navy know this. When they searched the web they found a company whose primary focus was custom US Navy design and illustration.
03-17-2017 | Fashion, Lifestyle, Trends
Vision Strike Wear
RSO Oceana FCPOA Get Their Custom US Navy Shirts Today!
When First Class Associations want the finest in shirts they turn their creative goals to Vision-Strike-Wear.Com Whether it’s a perched crow atop the Liberty Bell, an F-18 screaming off the deck of a carrier for the FCPOA that are associated with these ships and commands or possibly it’s the location like NAS Oceana the FCPOA does want the best when it comes to their custom shirts. At Vision-Strike-Wear.Com they get it.
11-29-2016 | Fashion, Lifestyle, Trends
Vision Strike Wear
US Navy Corpsman Tribal Coin Released
Once again a highly detailed and exquisite coin has been released for coin collectors and United States Navy Corpsman! The detailed and highly sought after coins designed and crafted by Vision-Strike-wear.Com has come another amazing coin to be added to your coin collection arsenal: The US Navy Corpsman Tribal Coin. Detailed and bearing the original art of Frost Call, the lead designer of Vision-Strike-Wear.Com and its next level coin and apparel
Comments about openPR
9 o'clock: discuss press release with client, 10 o'clock: submit release to openPR, within the briefest possible time release is published and displayed in a prominent place on openPR.de. I am thrilled!
Zehra Spindler, Calypso Now! - Communication Agency