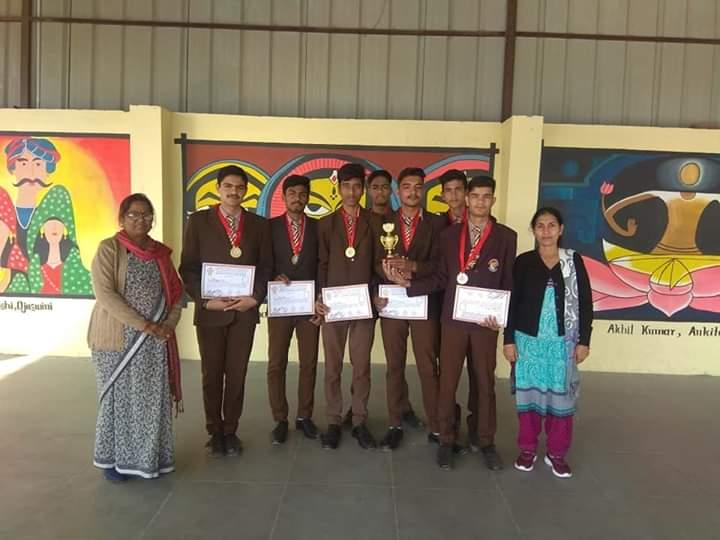 Students of Smt Jamuna Mishra Academy JMA Pilani draw inspiration from the all time great Basketball player Michael Jordan popularly referred across the world as MJ quote “Talent wins games, but teamwork and intelligence wins championships.” Sports, Yoga, Karate, Painting and Music are not just part of JMA routine but a way of life for the students. JMA was established in the year 2004 at Pilani in Shekawati which is considered as Oasis in the desert state of Rajasthan. Matter of Pride that alumni of JMA Pilani are presently pursuing higher education in various institutions which include Birla Institute of Technology and Science BITS Pilani which is one of the Institutions of Eminence and Banasthali Vidyapith which is not only in various QS Rankings but also in Times Higher Education THE World Rankings as one among the best 3 - 4% global universities as well as Second Best Women’s University in the world. According to Principal Mrs Booma Natarajan, sports for school students bring many benefits which include staying healthy, maintaining fitness, self esteem boost, leadership skill enhancement, positive thinking, emotional fitness improvement, sociability, following discipline, teamwork and cooperation improvement, improves time management, develops urge to succeed, improves patience and perseverance, develops lifelong habits. No one has doubt when it is said that what can be learned in the playground cannot be learned in the classroom.JDCSE Jhunjhunu District Council for Sports Education organized a basketball competition at district level on 01 Dec 2019 and team JMA played their heart out and bagged the trophy in category under 17. Principal congratulated the team for bringing name and fame to their Alma mater and urged them to make winning a habit in coming times too as it provides not only entertainment but also offers rewarding careers. For more details about JMA Pilani see http://www.jmapilani.org/Default.aspxMrs Booma Natarajan, M.Sc., M.A., B.Ed. Principal, Jamuna Mishra Academy – JMA Near Old Pilani Post Office Pilani Rajasthan 333031 India Phone 91-1596-242314 Email booma_pilani at yahoo.co.in Website: http://www.jmapilani.org/Default.aspx FaceBook: https://www.facebook.com/JMAPilaniRajasthanRank1/About JMA Pilani: Jamuna Mishra Academy - JMA Pilani is a Co-educational English Medium School with Experienced Teachers, Spacious Classrooms and Modern Amenities designed to impart Quality Education combined with All Round Personality Development and lay the Best Foundation for the Child’s Future. While the school admits both boys and girls, the girl student enrollment has been steadily rising every year and is presently nearly 50% of the total strength. Right from its inception, JMA Pilani has embarked on a rich tradition of celebrating various days of national and international significance and festivals which makes it a cut above the rest schools in Pilani. The school has for boys and girls Scout and NCC, girls’ band which has been winning laurels every year. NCC cadets of JMA Pilani have also been selected for participation in Republic Day Camp RDC and Shivaji Trail Trek. Yoga, Karate, Painting and Music are not just part of school routine but a way of life for the students. It is a matter of great pride that JMA Pilani is referred popularly as the School with 100% Results on account of outstanding results year after year in Board of Secondary Education Rajasthan RBSE Class X and Class 12.

12-14-2017 | Sports
WISE GUY RESEARCH CONSULTANTS PVT LTD
Basketball Market Global Industry Analysis 2017 – 2022
Global Basketball Industry Latest Report on Basketball Market Global Analysis & 2022 Forecast Research Study WiseGuyReports has announced the addition of a new market intelligence report to its repository titled “Global Basketball Market Size, Status and Forecast 2022”. The research report presents a comprehensive overview of market and growth trends of this industry in the coming years. Try Sample Report @ https://www.wiseguyreports.com/sample-request/1053539-global-basketball-market-research-report-2017 “Global Basketball Market" market report presents a detail qualitative analysis of the
09-06-2017 | Advertising, Media Consulting, …
MarketResearchReports.biz
Global Basketball Market Share By Players, By Basketball Material, By Specificat …
"The Latest Research Report Global Basketball Detailed Analysis Report 2017-2022 provides information on pricing, market analysis, shares, forecast, and company profiles for key industry participants. - MarketResearchReports.biz" About Basketball Market This report mainly introduces volume and value market share by players, by regions, by product type, by consumers and also their price change details. As a Detailed Analysis report, it covers all details inside analysis and opinion in Basketball industry. This report splits
06-19-2017 | Business, Economy, Finances, B …
Qyresearch.us
Global Basketball Hoop Market 2017- Bison, Gared, Goalsetter, Barbarian Basketba …
The Basketball Hoop Market 2017 examines the performance of the Basketball Hoop market, enclosing an in-depth judgment of the Basketball Hoop market state and the competitive landscape globally. This report analyzes the potential of Basketball Hoop market in the present as well as the future prospects from various angles in detail. The Global Basketball Hoop Market 2017 report includes Basketball Hoop industry volume, market Share, market Trends, Basketball Hoop Growth aspects,
05-29-2017 | Science & Education
Aidi School
Aidi Basketball Team Dribbles for Charity
Walking with the Sun is a charity concert organized by Aidi International School to help Dandelion Middle School, a school for children of rural migrant workers, develop a music education program. The event will take place on June 12th at the Poly Theatre and all proceeds will go towards supporting Dandelion’s music education. Students and teachers at Aidi School have been hard at work preparing for the Walking with the Sun
01-15-2014 | Sports
Hope International University
Women’s Basketball Makes History with NAIA Ranking
Hope International University’s Women’s Basketball team has earned their first ever NAIA Top 25 ranking. Currently ranked at #24, the Royals are 11-3 going into the second half of their season. They are also #7 in the NCCAA. With 15 games still to play in 2014, the Royals are on track to have one of their best seasons in recent years. They are currently chasing the record for the most
09-11-2012 | Sports
The Embassy of Uzbekistan in Germany
Basketball Pioneers
Popular game grows even more popular across regions. Leaders of the basketball federations of five neighboring countries – members of the newly established new continental sub-zone, the Central Asian Basketball Association (SABA) – met in Tashkent. “Emergence of SABA can be called a breakthrough in the whole system of the continental sports organizations,” said Abay Alpamysov, president of the new organization. “Prior to the SABA Founding Congress that took place this June
Comments about openPR
Your portal is fast, simple, and easy to use. Others may have more functions but they also demand more editing time, you have to preformat the text in order to achieve a good result etc. I think openPR is really fantastic!
Andreas Knepper, wallmedien AG