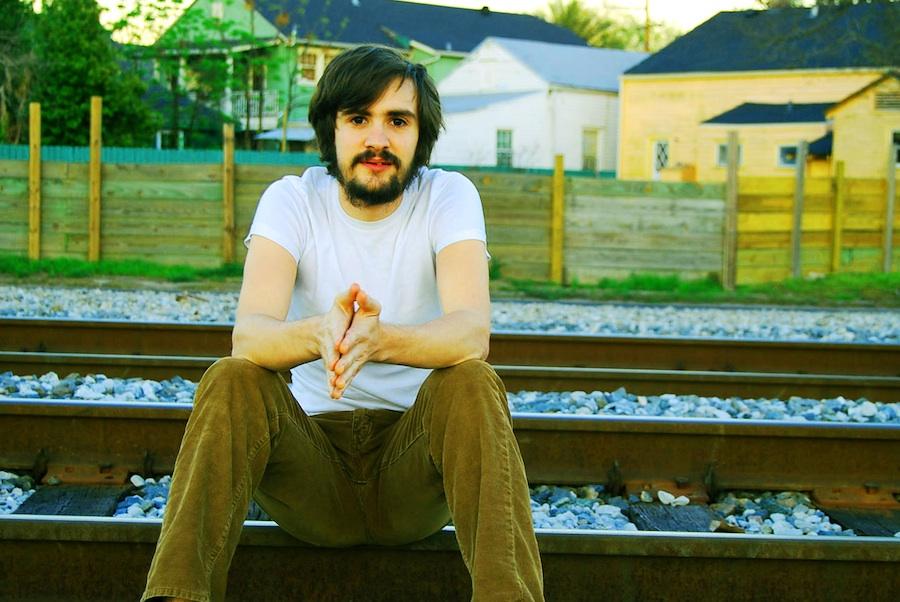 The Musician has recorded a live session from his studio in New Orleans, La recently, which includes five songs from his debut album "Themes From…" as well as 2 well known covers.New Orleans musician Daniel Amedee recently released a live session. This live set includes five songs off his debut album Themes From… as well as two covers including Neil Young's "Heart of Gold" and a cover of Bob Dylan's "It's All Over Now, Baby Blue"When asked why he chose to cover "Heart of Gold" Daniel said, "I wanted to pick a song I knew I could make my own. I knew it would fit with my style of singing and the way I play. That song also has an incredible presence and tells a really nice story. I felt like I could put myself into the song and do a good version of it."Daniel wanted to release a live set to show the different dynamics at play within his music. While his album is large and dominating, his live set is subtle and unimposing. Daniel says, "When you strip down the songs and it's just me playing them they take on a completely different feel and that's not something you can hear on the album. I wanted to show a different side the songs I write."You can see Daniel's video for "Heart of Gold" here: http://www.youtube.com/watch?v=V1Ztml21qIAYou can also listen to and download the live session here: http://soundcloud.com/danielamedee/sets/live-studio-session-june-2011/Expat Records is a label and music publishing company representing artists worldwide. Expat is unique in its creation and creative use of advanced software systems and web 2.0 technologies to market and promote its artists.For more information please visit: www.Expat-Records.com http://musicians.about.com/od/recordlabelinterviews/a/Interview-With-Jeff-Libby-Of-Expat-Records.htm http://www.facebook.com/pages/Expat-Records/360325648490 http://twitter.com/ExpatRecords2885 Stanford Avenue 12566 Grandville MI 49418

You can edit or delete your press release NEW ORLEANS MUSICIAN Daniel Amedee releases live versions of tracks from his current album. here

08-10-2011 | Leisure, Entertainment, Miscel …
Expat Records
SUBSET Make It Half Way Through Their Chords and Chaos 2011 Tour.
The London based indie rock band, renowned for their low fi, fuzz rock sound have been travelling the length of the UK playing tracks from their latest EP ‘Mahogany’ to their army of loyal fans, known as SUBSETTERs. Keeping to the fuzz rocking foursomes grassroots touring ethos of using public transport and dragging equipment around on trolleys is kinder to the environment, however it’s not always easy on the London-based fuzz
08-05-2011 | Leisure, Entertainment, Miscel …
Expat Records
Female Fronted Band ‘The Blissful Mop’ To Release Debut 5 Track EP On Expat …
The EP entitled ‘Seventeen’, showcases a variety of musical styles from the UK band and includes the anthemic, string-laden ‘Monsters’. Seventeen is due for general release on 22nd August 2011. The Blissful Mop is a collaboration between singer/lyricist Bliss Nayler and guitarist/composer Joe Inkpen. The Blissful Mop create songs that are characterised by heavy rock riffs, soaring orchestral arrangements and deeply personal lyrics. Beginning their writing partnership when the duo was in
08-03-2011 | Leisure, Entertainment, Miscel …
Expat Records
London Breakbeat Producer ‘Mafia Kiss’ To Release New Single ‘What!’ On …
‘What!’ is the follow up to the critically acclaimed ‘Bump It’ which reached No. 1 on the ‘Track it Down’ breaks chart. Mafia Kiss is an up and coming breakbeat producer from London, UK, who began his musical path with an early fascination in house music. As various other styles of electronic music evolved, the signature Mafia Kiss sound was developed by fusing together breaks and electro and creating
08-03-2011 | Leisure, Entertainment, Miscel …
Expat Records
Indie Alternative Duo, ‘the Travellers’ To Release Single ‘Waiting’ on 8 …
The Sixties inspired band has chosen to partner with indie label Expat Records to release the track, which has been previously featured on BBC Berkshire. The Travellers, the indie alternative duo from UK & France will be releasing the single ‘Waiting’ on 8th August. The track showcases the minimal indie side of the band who are renowned for their 60’s pop supernova of clean guitars, subtle drums and seductive vocals. It was

11-29-2018 | Business, Economy, Finances, B …
EightCap
Daniel Ricciardo becomes EightCap Official Ambassador
Australian F1® driver Daniel Ricciardo has joined forces with Forex & CFD Broker EightCap. Daniel has joined one of Australia’s fastest growing online trading companies as the official brand ambassador. “Getting to know the team at EightCap and their business made the decision a really comfortable one for me. EightCap is ambitious and just as passionate about the financial markets as I am about my career.” “Striving to be the
09-11-2012 | Politics, Law & Society
Jackson Walker L.L.P.
Jackson Walker Welcomes Daniel Nossa
Daniel Nossa joins the Energy practice and the Derivatives group in the Houston office at Jackson Walker. Mr. Nossa represents issuers, underwriters, and derivative counterparties on an array of derivative and structured finance products. He provides regulatory advice to derivative dealers and end users in the energy industry. Mr. Nossa advises numerous private and public companies in negotiating the transaction and credit support documentation related to credit, commodity, equity, and
11-24-2010 | Health & Medicine
Team Daniel Foundation
Team Daniel Foundation Debuts Revamped Magazine
Fayetteville, NC (November 23, 2010)—Team Daniel Foundation, an organization dedicated to supporting North Carolinians with developmental disabilities, has rejuvenated its quarterly magazine, EMPOWERED.The only publication in the state written specifically for the developmental disabilities community, EMPOWERED tailors its content to inform, educate and be a resource for families and individuals with developmental disabilities. The new EMPOWERED magazine is designed with a more functional and appealing layout, including new sections and powerful
09-17-2007 | Politics, Law & Society
Daniel Sheehan & Associates
Daniel Sheehan Recognized Among Texas’ Best Lawyers
DALLAS – For the fifth consecutive year, Daniel Sheehan has earned a spot on the prestigious Texas Super Lawyers listing. Mr. Sheehan, founder of Dallas’ Daniel Sheehan & Associates, LLP, is listed among the state’s top professional liability attorneys in the October 2007 issue of Texas Monthly magazine and Texas Super Lawyers magazine, a publication co-produced by the publishers of Texas Monthly and Law & Politics Media Inc. Earlier this year, approximately
07-06-2006 | Politics, Law & Society
Imperiali Organization
Daniel Imperato Launches 2008 Independent Presidential Campaign
Boca Raton, Florida -- Today, West Palm Beach, Florida businessman, Daniel Imperato officially launched his Independent candidacy for President in 2008, at the Boca Raton Resort and Club. With Vice-Presidential running mate, Webster Brooks of West Hartford, Connecticut by his side, Imperato said "It's time for Americans who are fed up with the incompetence and partisan warfare between Democrats and Republicans to create a political movement that
06-01-2006 | Politics, Law & Society
US Politics World
Daniel Imperato Seen With Italian Senator Moschetti
Rome, Italy, - May 31, 2006 - Today Daniel Imperato (www.imperatobrooks.com) was seen at the St. Regis Hotel with the Senator of Rome, Giorgio Moschetti. Senator Moschetti, who is one of the most influential senators in all of Italy, will be a key alliance for Imperato in Italy. In addition, with Imperato’s strong Catholic ties, and alliances in Rome (Imperato is also a Papal Knight, with honors from the Vatican), he could
Comments about openPR
Your portal is fast, simple, and easy to use. Others may have more functions but they also demand more editing time, you have to preformat the text in order to achieve a good result etc. I think openPR is really fantastic!
Andreas Knepper, wallmedien AG