SUBSET Make It Half Way Through Their Chords and Chaos 2011 Tour. 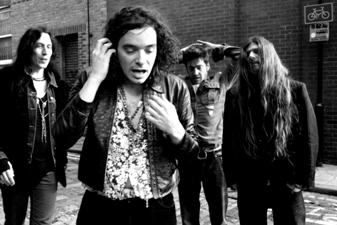 SUBSET Make It Half Way Through Their Chords and Chaos 2011 Tour.

The London based indie rock band, renowned for their low fi, fuzz rock sound have been travelling the length of the UK playing tracks from their latest EP ‘Mahogany’ to their army of loyal fans, known as SUBSETTERs.Keeping to the fuzz rocking foursomes grassroots touring ethos of using public transport and dragging equipment around on trolleys is kinder to the environment, however it’s not always easy on the London-based fuzz rockers. Nevertheless, it never leaves them short of a tale of two.2011 sees the fuzz rocking foursome travel further afield. Through the never ending, but constantly increasing support of their fans, SUBSETTERs, they have been able to crash on the floors of a variety homes; they’ve also shared baskets with pets and been the source of amusement for small children. One of the first casualties of the Chords and Chaos Tour was Rom’s trusty Marshall combo – all was fine at the soundcheck at The Boston Music Rooms but as they rocked out in front of the Kentish Town crowd Rom’s area of the stage went unusually quiet with an accompanying burning smell – it turns out that his Marshall had decided it was time for a holiday. This did not stop the show and through some quick stage management and kind assistance from another guitarist, things went smoothly from there on.SUBSET has taken the possibility of reincarnation on-board since they played a gig in Brixton. The landlord’s terrier appeared to contain the spirit of a drummer as every attempt of keeping the small, white dog off the stage and to stop him staring at Steve failed. Every percussive hit was met with a precise off-beat exited bark from the drummer dog. When the owner finally came to remove Tin-Tin the terrier, the playful pooch decided to christen the band and the front row of the audience… it’s safe to say that the memory, and the smell, lingered for a quite a while.Lead singer Romain Daste, tells of further ‘Chords and Chaos Tour’ adventures “The next casualties of the tour came when myself and Jay were dragging our gear through the streets of Leighton Buzzard. Jay had already killed his main trolley by falling down some stairs when carrying his cab in a rush; this meant that he had to use his backup wheels. Unfortunately, the reason for Jay upgrading to the new, but now dead trolley, became cruelly apparent less than half-way to the venue when one of the trolley wheels overtook us. On the plus-side, however, this occurred opposite a popular supermarket chain – every cloud has a silver one doesn’t it? A loan of a shopping-trolley (we did buy some food and road beers from the store as well) assisted us across town much to the entertainment of locals and the venue owner”.One thing people will get to know about SUBSET is that they find it difficult to turn the chance to play down. The fuzztastic four have played 2 gigs in one day a few times already but they recently saw an opportunity to try something new when they were booked to perform a 90 minute show. You see, the show was being broken down into a pair of 45 minute sets with a break in between - this opened up the chance for them to join another band on stage that were playing in the same town but at a different venue. Yes – squeeze another show in at a different venue in the middle of one they were half-way through! This gives you some idea of their work ethic and how much they enjoy being on stage!With a number of festivals booked for the rest of the year and trips up to the Midlands and down to the South Coast – anything could happen over the next 6 months and, knowing this bunch, probably will be unpredictable.For more info on the Subset Tour head to http://SubsetBand.com/GigsExpat Records is a label and music publishing company representing artists worldwide. Expat is unique in its creation and creative use of advanced software systems and web 2.0 technologies to market and promote its artists.For more information please visit: www.Expat-Records.com http://musicians.about.com/od/recordlabelinterviews/a/Interview-With-Jeff-Libby-Of-Expat-Records.htm http://www.facebook.com/pages/Expat-Records/360325648490 http://twitter.com/ExpatRecords2885 Stanford Ave 12566 Grandville MI 49418

You can edit or delete your press release SUBSET Make It Half Way Through Their Chords and Chaos 2011 Tour. here

08-15-2011 | Leisure, Entertainment, Miscel …
Expat Records
NEW ORLEANS MUSICIAN Daniel Amedee releases live versions of tracks from his cur …
The Musician has recorded a live session from his studio in New Orleans, La recently, which includes five songs from his debut album "Themes From…" as well as 2 well known covers. New Orleans musician Daniel Amedee recently released a live session. This live set includes five songs off his debut album Themes From… as well as two covers including Neil Young's "Heart of Gold" and a cover of Bob
08-05-2011 | Leisure, Entertainment, Miscel …
Expat Records
Female Fronted Band ‘The Blissful Mop’ To Release Debut 5 Track EP On Expat …
The EP entitled ‘Seventeen’, showcases a variety of musical styles from the UK band and includes the anthemic, string-laden ‘Monsters’. Seventeen is due for general release on 22nd August 2011. The Blissful Mop is a collaboration between singer/lyricist Bliss Nayler and guitarist/composer Joe Inkpen. The Blissful Mop create songs that are characterised by heavy rock riffs, soaring orchestral arrangements and deeply personal lyrics. Beginning their writing partnership when the duo was in
08-03-2011 | Leisure, Entertainment, Miscel …
Expat Records
London Breakbeat Producer ‘Mafia Kiss’ To Release New Single ‘What!’ On …
‘What!’ is the follow up to the critically acclaimed ‘Bump It’ which reached No. 1 on the ‘Track it Down’ breaks chart. Mafia Kiss is an up and coming breakbeat producer from London, UK, who began his musical path with an early fascination in house music. As various other styles of electronic music evolved, the signature Mafia Kiss sound was developed by fusing together breaks and electro and creating
08-03-2011 | Leisure, Entertainment, Miscel …
Expat Records
Indie Alternative Duo, ‘the Travellers’ To Release Single ‘Waiting’ on 8 …
The Sixties inspired band has chosen to partner with indie label Expat Records to release the track, which has been previously featured on BBC Berkshire. The Travellers, the indie alternative duo from UK & France will be releasing the single ‘Waiting’ on 8th August. The track showcases the minimal indie side of the band who are renowned for their 60’s pop supernova of clean guitars, subtle drums and seductive vocals. It was