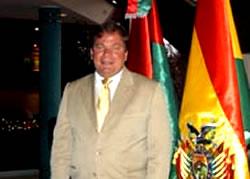 Washington DC (i1Connect News) – Daniel Imperato revisited a campaign promise today, to open communications and improve relations with Cuba. As the leading Independent candidate for President, Imperato – who has extensive world business and strategic experience – repeated his 2005 prediction that if the United States didn't take action with Cuba, someone else will. Back in June of 2007, Imperato called for an immediate meeting with Fidel Castro, once it was announced that he had returned to good health. “Helping Cuba become an economic force in the region will go a long way toward freeing the Cuban people from bondage and unfair living conditions. Forty years of American administrations have been neglecting one of our important strategic security points – the Caribbean sea lanes and the opportunity for trade with Cuba. The Caribbean and Cuba have become investment hubs for foreign nations around the globe, which could very well jeopardize our security," contended Imperato. "If we do not address the Cuban situation with Castro, Hugo Chavez will. The Chinese will. They have already loaned millions to Cuba and have offered to protect their oil and gas shipping lanes. We can't lose this opportunity for freedom with one of our closest neighbors." In August 2006, shortly after declaring that the United States had a duty and obligation to support democracy, Miami based Cuban-American community leader Art Alvarez endorsed Daniel Imperato for the White House. "Cuba could be a very important ally and a great friend to our nation if we would reach out to them,” summarized Imperato. By Joseph Oddo Imperato will address this issue in his weekly Wednesday broadcast at 8pm on www.imperato2008.com. For Media Inquiries Contact: i1connect Press Department press@i1connect.com 561-515-6177 www.i1connect.com About Daniel Imperato (www.imperato2008.com) Daniel was born in Boston, Mass (1958), and began his business career in 1977 transforming the manufacturing facilities in Israel through adapting them to the global marketplace along with bringing financing to the factories for global expansion. Daniel brings over thirty years of experience in global business planning and development and has personal relationships at high levels around the world. He is currently a Papal Knight with honors from the Vatican, was a board member for the African Center Foundation (a United Nations NGO), the Grand Prior of the Orden Bonaria, a Ronald Reagan Gold Medal Winner, 2004 NRCC Businessman of the Year, and an ordained Chaplain for the Latin/African American Chaplains Association of New York. Presently, he has decided to seek the office of President of the United States as an Independent candidate for 2008.

01-09-2008 | IT, New Media & Software
i1connect
GoIP and Visisys to Launch "Simone"
NEW YORK, NY / Jan 8, 2008 - GoIP Global, Inc. (Other OTC:GOGB.PK - News) (Frankfurt:3GG.F - News) announced today that a strategic partnership has been reached with Visisys Inc., the developer of Viso Vue. Viso Vue enables "Simone" (an animated, interactive character) with facial recognition to come to life on a video screen and interact with its viewer. Viso Vue uses stored customer or individual profiles to offer "Simone" realtime
11-23-2007 | Business, Economy, Finances, B …
i1connect
i1search Gains in New Alexa Traffic Rankings
West Palm Beach, FL - November 21, 2007 – In another surprise, one of the internet's fastest growing search engines, i1search (i1search.com) has leapfrogged several thousand websites to move into the top 45,000 websites in the United States, as determined by traffic rank measured by Alexa, the world's leading authority on internet traffic. i1search, as of November 21, 2007, has a traffic ranking of 43,875 in the
11-06-2007 | Politics, Law & Society
i1Connect
Imperato Steps Out Again - Predicts Republican Strategy for 2008
Washington, DC. -- Leading Independent Libertarian Presidential candidate Daniel Imperato has proven an uncanny ability to predict the headlines, especially when it comes to the Bush Administration and their cadre of “polished – ticians” methods of winning elections. Citing several of his own previous accurate predictions, Imperato made a new and even bolder prediction for what we can expect from the Republicans during the 2008 presidential campaign. He leads with
10-29-2007 | Politics, Law & Society
i1connect
Imperato Calls it Again: Rudy Giuliani New York Mafia Conspiracy
New York - October 26, 2007 - "Giuliani taking credit for wiping out organized crime may have been a feather in his cap. Now that he's running for president, I hope that doesn't turn around on him to bite him back. People who live in glass houses shouldn't throw stones," stated Imperato. Those were the words stated on July 28, 2007 by 2008’s leading Independent Libertarian Presidential Candidate, Daniel Imperato. Yesterday, according

02-11-2019 | Advertising, Media Consulting, …
MarketResearchReports.com
Cuba widens reach of 3G services
New research on Cuba’s telecom sector (https://www.marketresearchreports.com/paul-budde-communication-pty-ltd/cuba-telecoms-mobile-and-broadband-statistics-and-analyses ) remains a peculiarity, with state control having stymied rather than promoted the development of all sectors. The country has the lowest mobile phone and internet penetration rates in the region, while fixed-line teledensity is also very low. Fixed-line and mobile services remain a monopoly of the government-controlled Empresa de Telecomunicaciones de Cuba (ETESCA Cubacel). Although there are strict state restrictions over the right
06-29-2017 | Fashion, Lifestyle, Trends
MarketResearchReports.biz
Cigarettes in Cuba, 2017 Published By MarketResearchReports.biz
MarketResearchReports.Biz presents this most up-to-date research on "Cigarettes in Cuba, 2017" Description "Cigarettes in Cuba, 2017" is an analytical report by GlobalData that provides extensive and highly detailed current and future market trends in Cuba. Cuba is the largest island in the Caribbean and one of the larger markets for cigarettes in the region. Since the early 1990s, cigarette sales have been affected by a combination of local production problems, the erratic performance
03-23-2017 | Tourism, Cars, Traffic
Explorations Inc
Explorations announces 2018 Cuba Cruises
The adventure tour company, Explorations has announced the 2018 schedules and rates for three yacht cruise programs in Cuba. They are all People-to-People Cuba programs open to United States citizens. The itineraries explore the western part of the island nation, which is famous for its culture, music, warm people, and art with day tours while sailing from Havana to Cienfuegos. Each day passengers will discover a new port of call,
01-03-2017 | Advertising, Media Consulting, …
PromoQuip Inc
Plinko Board Shipped to Cuba Highlights International Opportunities
PromoQuip Plinko Board ordered to celebrate Jet Blue’s direct flights to Cuba; Michigan manufacturer’s multi-language website key to continued expansion in global marketplace Cedar Springs, MI; January 3, 2017 – PromoQuip, a leading designer and manufacturer of custom promotional equipment recently shipped their first order to Cuba. The custom Plinko Board was ordered by Jet Blue, to celebrate being among a small group of air carriers authorized to provide direct
02-20-2013 | Sports
Baseball Geek Group: Jimm Hendren
Baseball Geek Group: Jimm Hendren│Baseball in Cuba
Baseball was first introduced to Cuba in 1860s by students who returned from the US and also from Western sailors docked in the nation. It quickly became popular and was spread widely. In 1878, the Cuban League was established composed of 3 teams — Mantanzas, Habana, and Almendares — each playing 4 games. At first, players were all whites and amateurs but professionalism soon emerged as rivalry among teams strengthen. The Cuban
09-06-2011 | Fashion, Lifestyle, Trends
Pegasus Spiele
Pegasus Spiele publishes „Santiago de Cuba“
Friedberg/Hamburg, September 5th 2011 – „Santiago de Cuba“, the new board game from eggertpiele will be published by Pegasus Spiele in time for SPIEL 2011 in Essen. Starting September 1st , all distribution and communication duties are being handled by Pegasus Spiele, which takes over from their business partners at AMIGO Spiel + Freizeit GmbH. At this October's SPIEL eggertspiele will be presenting „Santiago de Cuba“ at their booth. „We are
Comments about openPR
OpenPR ist the nicest and most clearly laid out PR platform I have seen to this day. The press releases are displayed very nicely and clearly and without any unnecessary frills. The updates are fast and the finished release looks appealing and is clearly legible. Even with 16 years of experience one discovers new things from time to time. Congratulations!
Gabriele Ketterl, Director Marketing & PR, Menads