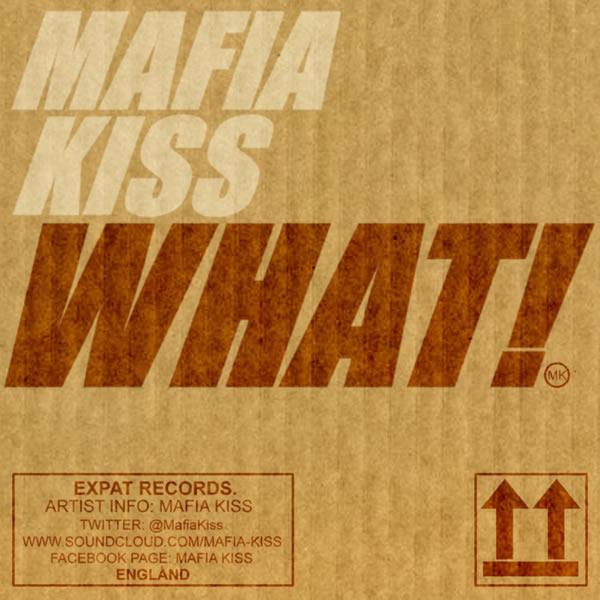 ‘What!’ is the follow up to the critically acclaimed ‘Bump It’ which reached No. 1 on the ‘Track it Down’ breaks chart. Mafia Kiss is an up and coming breakbeat producer from London, UK, who began his musical path with an early fascination in house music. As various other styles of electronic music evolved, the signature Mafia Kiss sound was developed by fusing together breaks and electro and creating beats, bleeps and gripping synths.Following several years of producing music, honing his craft and playing live gigs, Mafia Kiss signed with indie label Expat Records and in March 2011, released his first official single entitled ‘Bump It’ featuring female rapper Imarni Blue. ‘Bump It’ received critical acclaim and reached the top of the ‘Track It Down Breaks Top 100 Chart’ ahead of many established artists including Evil Nine and Stanton Warriors and was also track of the week on Amazing Radio.What! is the second single from the London based breakbeat producer and has garnered support from Marten Horger/Smash Hifi, DJ Chamber (winner of Best New DJ – Breakspoll 2011) and renowned breakbeat producer Krafty Kuts.Jeff Libby, CEO of Expat Records comments on the release, “What! is the perfect follow up to Mafia Kiss’ smash ‘Bump It’ and certainly won’t disappoint fans. A real breakbeat stomper with a Daft Punk style breakdown and big room drop that leaves you asking “what just happened?”.What! By London breakbeat producer Mafia Kiss is released on Expat Records on 8th August 2011.For more information on ‘Mafia Kiss’ head to http://www.expat-records.com/Mafia%20Kiss/Expat Records is a label and music publishing company representing artists worldwide. Expat is unique in its creation and creative use of advanced software systems and web 2.0 technologies to market and promote its artists.For more information please visit: www.Expat-Records.com http://musicians.about.com/od/recordlabelinterviews/a/Interview-With-Jeff-Libby-Of-Expat-Records.htm http://www.facebook.com/pages/Expat-Records/360325648490 http://twitter.com/ExpatRecordsExpat Records 2885 Stanford Avenue 12566 Grandville MI 49418

You can edit or delete your press release London Breakbeat Producer ‘Mafia Kiss’ To Release New Single ‘What!’ On 8th August 2011. here

08-15-2011 | Leisure, Entertainment, Miscel …
Expat Records
NEW ORLEANS MUSICIAN Daniel Amedee releases live versions of tracks from his cur …
The Musician has recorded a live session from his studio in New Orleans, La recently, which includes five songs from his debut album "Themes From…" as well as 2 well known covers. New Orleans musician Daniel Amedee recently released a live session. This live set includes five songs off his debut album Themes From… as well as two covers including Neil Young's "Heart of Gold" and a cover of Bob
08-10-2011 | Leisure, Entertainment, Miscel …
Expat Records
SUBSET Make It Half Way Through Their Chords and Chaos 2011 Tour.
The London based indie rock band, renowned for their low fi, fuzz rock sound have been travelling the length of the UK playing tracks from their latest EP ‘Mahogany’ to their army of loyal fans, known as SUBSETTERs. Keeping to the fuzz rocking foursomes grassroots touring ethos of using public transport and dragging equipment around on trolleys is kinder to the environment, however it’s not always easy on the London-based fuzz
08-05-2011 | Leisure, Entertainment, Miscel …
Expat Records
Female Fronted Band ‘The Blissful Mop’ To Release Debut 5 Track EP On Expat …
The EP entitled ‘Seventeen’, showcases a variety of musical styles from the UK band and includes the anthemic, string-laden ‘Monsters’. Seventeen is due for general release on 22nd August 2011. The Blissful Mop is a collaboration between singer/lyricist Bliss Nayler and guitarist/composer Joe Inkpen. The Blissful Mop create songs that are characterised by heavy rock riffs, soaring orchestral arrangements and deeply personal lyrics. Beginning their writing partnership when the duo was in
08-03-2011 | Leisure, Entertainment, Miscel …
Expat Records
Indie Alternative Duo, ‘the Travellers’ To Release Single ‘Waiting’ on 8 …
The Sixties inspired band has chosen to partner with indie label Expat Records to release the track, which has been previously featured on BBC Berkshire. The Travellers, the indie alternative duo from UK & France will be releasing the single ‘Waiting’ on 8th August. The track showcases the minimal indie side of the band who are renowned for their 60’s pop supernova of clean guitars, subtle drums and seductive vocals. It was

12-17-2020 | Arts & Culture
BookBuzz.net
Retired Police Detective Michael O'Keefe Promotes His Crime Thriller – A Recko …
Retired Police Detective Michael O'Keefe Promotes His Crime Thriller – A Reckoning in Brooklyn Retired police detective and author, Michael O'Keefe, is pleased to announce the promotion of his crime thriller, A Reckoning in Brooklyn. Bushwick Brooklyn in the 1970s is a cesspool of drugs, violence, and depravity. Every aspect of life in the blighted neighborhood has been contaminated by the Mafia. Butchie Bucciogrosso is an Italian cop who detests the Mob.
10-13-2020 | Tourism, Cars, Traffic
Thanda Island
Thanda Island Offers Marine Encounters by Day & Night
**Newly reopened private island in the Indian Ocean tempts guests with nighttime activities ranging from snorkeling, reef walks and searching for bioluminescence with resident Marine Biologist** The day is far from over when the sun goes down at Thanda Island. Following cocktails and elaborate dinners served in the Villa, the private 20-acre island located 18 miles into the Indian Ocean off the coast of mainland Tanzania offers activities for guests to
12-01-2017 | Leisure, Entertainment, Miscel …
Music Promotion Club
Boost your Party Mood with Mafia’s “Dancing Like My Diamonds”
Music is the coolest art form. It can make you cry, it can make you smile, and it can make you forget all the pains in life. Keeping music along the way you walk will mean a lot for yourself. Now, talking from that aspect, hip hop and rap has a whole different in a human’s life. Not only because it is the most popular genre worldwide, but because it
12-23-2010 | Leisure, Entertainment, Miscel …
The Mafia Boss - Most Addicting Mafia Game
The Mafia Boss Launches New Beta Version and Tutorial Video
The Mafia Boss, an online multiplayer game that simulates the mafia underworld launches a new beta version and a video tutorial. Players will be able to preview the beta’s exciting new features and learn tips and tricks in the video. The Mafia Boss is the longest running online multiplayer mafia game. New York, NY (PRWEB) December 20, 2010 The Mafia Boss, an online multiplayer game that simulates the mafia underworld
06-08-2010 | Advertising, Media Consulting, …
The Mafia Boss - MMORPG Mafia Game
TheMafiaBoss.com, a Massive Multiplayer Free Mafia Game Online Celebrates 5th An …
TheMafiaBoss, a Massive Multiplayer Online Role Playing (MMORPG) Mafia Game celebrated its 5th anniversary on May 5, 2010. The game has maintained positive growth and remained popular over the past five years through consistent updates and feedback from players and despite the emergence of new mafia game titles TheMafiaBoss will remain the mother of all Mafia Games as discussed by the players themselves withing the game community. Bristol, WI (PRWEB)
08-10-2009 | IT, New Media & Software
G Data Software AG
Twitter, Facebook and co. find themselves targeted by the Cyber-Mafia
G Data Malware half-year report: Viruses and worms are once again setting the tills ringing ++ Bochum (Germany), 07th August 2009 – Social networking sites such as Facebook, StudiVZ or Twitter are enjoying increasing popularity. The growing visitor numbers and constant new offers ensure that cyber criminals are also taking note of these portals, causing them to be increasingly targeted by the black economy. Alongside social networks, Windows users will
Comments about openPR
OpenPR ist the nicest and most clearly laid out PR platform I have seen to this day. The press releases are displayed very nicely and clearly and without any unnecessary frills. The updates are fast and the finished release looks appealing and is clearly legible. Even with 16 years of experience one discovers new things from time to time. Congratulations!
Gabriele Ketterl, Director Marketing & PR, Menads