Press release from: Center for Excellence in Education 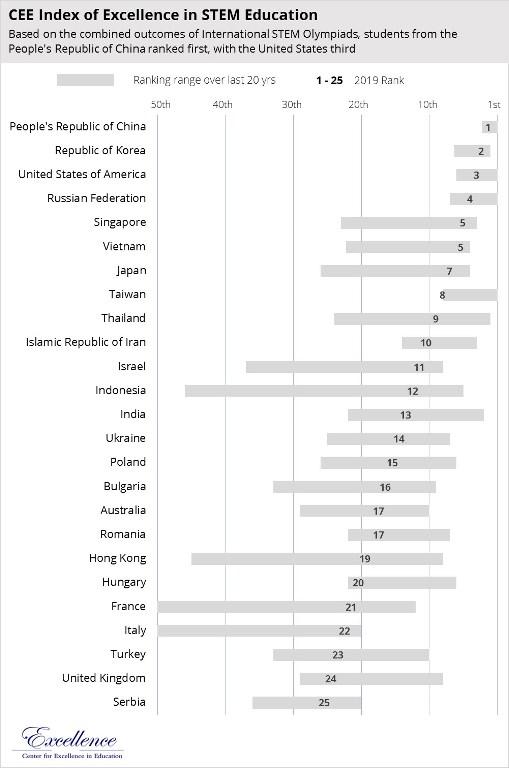 McLean, VA (October 15, 2019) – Economic competitiveness is driven by scientific innovation of the nation’s top achievers. To get visibility of how well U.S. students stack up against those in other countries, the nonprofit Center for Excellence in Education (CEE) has developed an index of STEM education preparedness.The CEE Index of Excellence in STEM Education measures educational preparation for the highest levels of international academic competition. It analyzes individual student rankings at each of five STEM-related Olympiad competitions; generates averages and rankings by participating country; and compares overall Olympiad performance by country. “The index gives our policy-makers and educators an important tool to see how well our next generation of innovators compares to those in the rest of the world,” says Center president, Joann P. DiGennaro. “Chinese success at STEM Olympiads has correlated with the growth of the Chinese economy. This tool is critical to any analysis of how we prepare the next generation of leaders.”Based on the combined outcomes of International Olympiads in Biology, Chemistry, Physics, Math, and Informatics, the index shows:The People’s Republic of China has dominated each of these events for the last 30 years; Team USA is improving, as evidenced by overall second and third place rankings in the last two years; South Korea takes second place; The Russian Federation, also always a strong performer, is in fourth place; and Places 5 through 10 were captured by Singapore, Vietnam, Japan, Taiwan, Thailand and Iran.Printable Version (PDF) https://bit.ly/378evteThe index also shows that the performance of European students has declined as Asian countries have risen to dominate the Olympiads over the last few decades. Germany, for example, has now been forced out of the top 30, after having ranked number one in 1989, 1988 and 1982. Hungary, with a population only 1/8th the size of Germany’s, still managed a 20th place finish; while respectable, that’s a drop from the 1st or 2nd place glory it enjoyed in the 1960s and early 70s. Remarkably, Singapore, an even smaller country with fewer than 6 million inhabitants (half the population of Hungary), was able to tie Vietnam for 5th place.An analysis of Team USA’s performance from 1993 to the present shows a steady improvement in average ranking. The trend line shows movement from approximately a 6th place ranking up to 2nd or 3rd place behind China. The recent focus on STEM education in the United States is partly responsible. In addition, increased competition in the global marketplace has driven students to distinguish themselves through excellence in academic competition.“In most other countries, the government funds Olympiad programs, including training and other resources for teachers and students,” DiGennaro says, “but that is not the case in the U.S. China is pouring resources into these competitions, and that can be a significant advantage for China beyond the Olympiads. It’s important to note that China is also investing heavily in innovation, like R&D, an effort that has declined in Europe.”The Center for Excellence in Education (CEE) is committed to fostering excellence and leadership among high school and university students in STEM fields. CEE is host to the premier biology competition for high school students in the United States, the USA Biolympiad. MethodologyAnalysis was performed on data from each of the following well-established International Olympiads, judged to be those most representative of STEM subjects:IBO – International Biology Olympiad (data from 1990-present) ICHO – International Chemistry Olympiad (data from 1968-present) IMO – International Mathematics Olympiad (data from 1959-present) IOI – International Olympiad in Informatics (data from 1989-present) IPHO – International Physics Olympiad (data from 1967-present) The results for each individual student competing for each country for each Olympiad were tabulated. CEE averaged the student ranks by country in each Olympiad to create country scores. This enabled the CEE Index to rank the performance of national teams. The average ranking achieved by countries across Olympiads was generated by year, and then those results were ranked to create the final index.8201 Greensboro Drive Suite 215 McLean, Virginia 22102Press Contact: Tom Flavell, (703) 448-9062 ext. 237About the Center for Excellence in Education CEE was founded in 1983 by the late Admiral H.G. Rickover and Joann P. DiGennaro, President of the Center. The Center's mission is to nurture high school and university scholars to careers of excellence and leadership in science, technology, engineering and mathematics, and to encourage collaboration between and among leaders in the global community. CEE sponsors the Research Science Institute (RSI), the USA Biolympiad (USABO), and the Teacher Enrichment Program (TEP). For more information, visit CEE’s Web site, https://www.cee.org

More Releases from Center for Excellence in Education