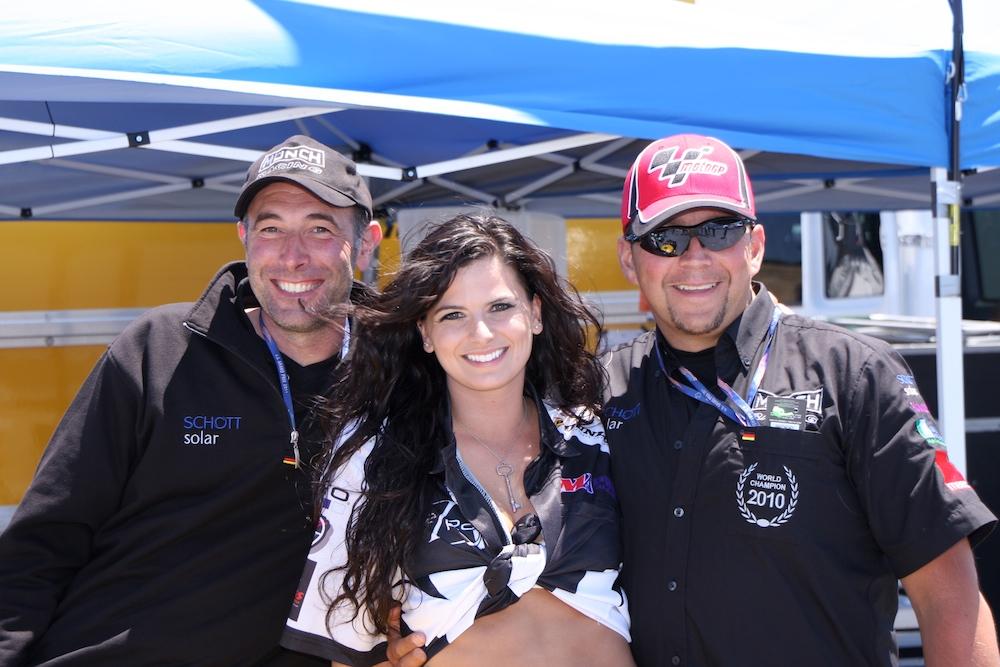 After the first two TTXGP races in Silverstone and Spa fans get to watch another suspenseful sabre rattling between the series’ racing teams and their e powered bikes at the “TT Circuit Assen” in Assen (NL). With its 17 curves and a total length of 4.555 meters the course has a lot to offer for both, teams and spectators.Already in 1925 the first motorbike races took place in Assen. Back at the time the raceway was 28.4 km long and made its way through Borger, Schoonloo and Grolloo- three Dutch provincial towns. Today it’s not the length, which makes the course so special, but the challenging track itself. Built exclusively for the racing sport the raceway’s curves can be seen at an early stage but on the other hand the drivers have to face chicanes that already forced lots of racing young bloods to quit. In line with numerous investments the complete paddock and headquarters got reconditioned in 2001 and 2002. The building measures made it possible for larger vehicles to unhampered get to the paddock which made the raceway even more famous.To make the track itself more appealing and challenging for the racing sport it underwent a major facelift in 2004. The raceway might just be the right thing for the German Matthias Himmelmann who already proofed his talent during his long lasting racing career and will put his experience to a good use when he repeatedly competes for MUENCH racing in Assen.“Our goal for the third European eGrandPrix is to be one of the top three since our TTE-2 is not made to meet the track’s characteristics. Furthermore the weather that is supposed to be rather cold and rainy adds another uncertainty factor. Hence we can be really happy if we manage to finish under the top 3,“ says Matthias Himmelmann, who just recently won in Spa (Belgium).Free of charge photos for editorial purposes can be found via http://medienkontor.net/index.php?id=94Further Information can be found via www.muenchmotorbikes.comThe MUENCH Racing Team is engaged in two international racing cups for electric motorcycles and has won both of those championships in 2010. The brand MUENCH leads back to Friedel Münch who started in 1948 at the German race track Hockenheimring. In the 1960s he manufactured the most powerful motorcycle oft those years, the legendary MUENCH Mammut TTS.MÜNCH MOTORRAD TECHNIK GmbH PB 9227 | D - 97092 Würzburg Internet: www.muenchmotorbikes.com Contact: Thomas Bruckert (MEDIENKONTOR) Phone: +49 - 351-316 05 15 E-Mail: press@muenchmotorbikes.com

You can edit or delete your press release 86th Racing anniversary in Assen (NL) - e-bikes are part as well. here

10-20-2011 | Sports
MÜNCH MOTORRAD TECHNIK GmbH
MUENCH Racing Team once again wins e-bike world final
Photographs for editorial purposes can be found via: http://medienkontor.net/index.php?id=94 This year e-powered racing sport teams competed for four championship titles. The German MUENCH Racing Team won all four of them! After winning the FIM e-Power construction category as well as both, the FIM and TTXGP European single rankings the traditional German brand secured another sensational victory at the TTXGP “World Final” last Sunday. Just like in 2010 they once again won
09-22-2011 | Sports
MÜNCH MOTORRAD TECHNIK GmbH
In line with Le Mans 24 hours MOTO MUENCH grasps at two e-power Championship tit …
Prior to the Le Mans 24 hour motor bike race this upcoming Saturday e-bike teams will fight out the European and FIM e-Power International Championship rankings. Reaching for both, the TTXGP Championship and global FIM Championship title, MUENCH Racing Team from Germany has to be taken into account when discussing who might win. Leading both overall rankings driver Matthias Himmelmann can calmly approach the upcoming races. With his sensational
09-05-2011 | Sports
MÜNCH MOTORRAD TECHNIK GmbH
German team MUENCH Racing wants to enlarge EC-lead this weekend in Sweden
On September 3rd and 4th the TTXGP e-bike racing series teams will race at the Karlskoga Motor Stadium where amongst others several European street competitions and the Swedish touring car championship already took place. The fact that visitors can actually see and follow the race from every part of the 2.400m long course adds another special feature to the course. It is going to be a very suspenseful race since
08-10-2011 | Sports
MÜNCH MOTORRAD TECHNIK GmbH
Hotshot Himmelmann wins eGrandPrix in Assen (NL)
It was the third European eGrandPrix and one must admit a special on at that! Last Weekend racing enthusiasts were provided with lots of fun in Assen. In line with GT races, superkarts, harnessed teams and the Dutch motorbike championship eMobility and therefore the German brand MUENCH and its driver Himmelmann was a big topic as well. 70.000 visitors got to watch Himmelmann win another exciting TTXGP championship race. The MUENCH

10-11-2018 | Business, Economy, Finances, B …
crypto currency News
Matthias Mende, Crypto Influencer of the Year, to Speak at Satoshi United in Dub …
Matthias Sheikh Mende, Block Gemini CSO and a well-established IT & crypto influencer, will be speaking at two largest international blockchain events in October 2018. The Chief Strategy Officer of one of the leading blockchain development companies in the Middle East will discuss up-to-the-minute industry news and might disclose some novelties behind Block Gemini’s latest projects. On October 22-23, Mende will be attending the Satoshi United conference in Dubai, the event
04-11-2012 | Energy & Environment
EnOcean GmbH
EnOcean appoints Matthias Poppel as COO
Oberhaching, Germany, 10 April 2012 – EnOcean, the inventor of energy harvesting wireless technology, has announced the appointment of Matthias Poppel as Chief Operation Officer (COO). In this newly created position, Matthias is responsible for the operational side of the business. The objective is to further align technology development with specific customer needs, the internationalisation of the company and the opening of new markets. Matthias Poppel reports directly to Laurent
06-30-2011 | Fashion, Lifestyle, Trends
dreipuls GmbH
Matthias Pinkert's LED RIMA Desk Lamp Continues its Success Story
Dresden, June 27th, 2011 After winning the Red Dot Design Award in 2010, dreipuls GmbH and designer Matthias Pinkert have been nominated for the German Design Award 2012. Once again, this nomination acknowledges Pinkert's outstanding creative work and represents another key step towards achieving a reputation as an innovative lighting designer in the vein of Ingo Maurer, Axel Meise and Tobias Grau. There is still a long way to go for the
02-10-2011 | Arts & Culture
Matthias Zarzecki
Matthias Zarzecki releases biggest game yet developed at the Design Schule Schwe …
February 4th, 2011 - Schwerin, Germany - Matthias Zarzecki has just released his debut work "unstoppaball" an independent physics-puzzle game, for Windows desktop PCs. You exert physical forces on a fragile sphere, guiding it through serene environments, trying to keep it from shattering, all whilst dangerous cliffs and enemies try to stop you, ever pushing onward. Unstoppaball has been developed during the last semester at the game-design-course of the "Design Schule Schwerin"
07-30-2010 | Arts & Culture
Matthias Haase
German Painting by Matthias Haase between Art Brut and abstract expression – u …
Dresden, July 29, 2010 - „The rough line, applied with brush and palette knife, grows out of the canvas, the image can be almost a sculpture. Independent, bulky and extremely attractive are his large-format works.“ Said Judith Borowski in the Financial Times Germany (January 5/6/7 2007) in their article „Painted good. Not for the harmonious vestibule: Matthias Haase.“ The people there in the art who can tolerate a little stronger
02-16-2009 | Industry, Real Estate & Constr …
Peterseim GmbH & Co. KG Metallwerke
Matthias Engelbertz new manager for finances and controlling with Peterseim Meta …
Figures, data, facts. This is the profession of the graduate in business management Matthias Engelbertz, who has assumed since the beginning of 2009 the management of the department finances and controlling with Peterseim GmbH & Co.KG Metallwerke. “From the very first day I noticed how loyal the atmosphere with the company Peterseim is. This pleased me a lot. After many years as employee with a big concern I had and
Comments about openPR
OpenPR is clearly structured and remains true to its principle of confining itself to the essential parts. OpenPR has proven to be a very good and reliable partner to our media agency: Within the shortest time the releases are online and go down well with the media representatives. The success of OpenPR is reflected in the steadily increasing number of press releases. It is good that OpenPR exists!
Ursula Koslik, Director Marketing & PR, F+W Hamburg