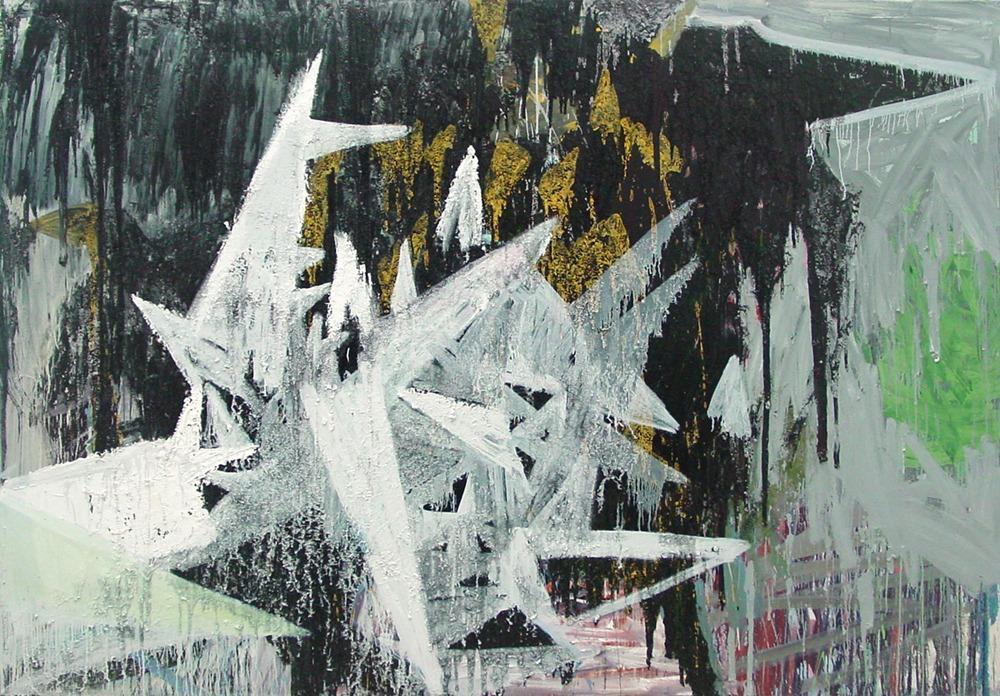 Dresden, July 29, 2010 - „The rough line, applied with brush and palette knife, grows out of the canvas, the image can be almost a sculpture. Independent, bulky and extremely attractive are his large-format works.“ Said Judith Borowski in the Financial Times Germany (January 5/6/7 2007) in their article „Painted good. Not for the harmonious vestibule: Matthias Haase.“ The people there in the art who can tolerate a little stronger painting, Matthias Haase is a new challenge – away from the painting of the New Leipzig School ("Neue Leipziger Schule"). Matthias Haase does not paint "what he knows," but what he sees and feels. He stays away from the New Leipzig School which Arno Rink describes like this: "They do not paint what they see, but what they know." Matthias Haase was a master at the Dresden Academy of Fine Arts, where he learned during his studies from 2000 to 2007 in the classes of the artists Günter Hornig, Siegfried Klotz and Ralf Kerbach. 2004 his first catalogue entitled “Blaupumpe” ("blue pump") with figurative painting was released during the study.From the representational figurative painting Matthias Haase finally developed a personal style: Large formats allow him a breed type, charged and rough handling of the material colour with brush and spatula. The raw image surfaces of the oil painting as well as the bulky forms and motifs are a challenge – because they show a human, sentient and exciting side in contemporary painting. The images are growing in a direct and expressive painting process with a high sensitivity to colour tones. Free forms and informal, tachism elements provide the viewer space for personal associations and relationships in the history of art. Aspects of Art Brut and Abstract Expressionism in his position is recognizable as well as contemporary art expression. His solo exhibition, entitled "Diesel" in Artbuero Berlin gallery commented in 2006 a visitor once, as follows: "Through his powerful use of shapes, colours and textures Matthias Haase creates his own world of images, the echoes of familiar images can be felt, but where just yet “Das Eismeer” (“The Sea of Ice“) by Caspar David Friedrich or a landscape from among artists like “Die Brücke”, Matthias Haase triggers such associations back on and involves the viewer in a dialogue in his own language: unadorned and honest, open and without ulterior motives or constructed pseudo-philosophy."Matthias Haase is currently working on a series of small-format watercolour drawings. The motifs of the previously incurred large formats shall continue in a concentrated form.About Matthias Haase: Matthias Haase is born in 1978 in Elsterwerda (Brandenburg, Germany). He studied at the Academy of Fine Arts in Dresden from 2000-2005 and ended his study of painting and graphics in 2007 in the master class of Prof. Ralf Kerbach. 2003 to 2006 he was a fellow of the German National Academic Foundation and worked as a studio artist in residence 2003 in Schöppingen (NRW) under the sponsorship of painting by NRW district Borken. So far Matthias Haase showed his work in many solo and group exhibitions in Germany. On his new website www.matthiashaase.com a selection of paintings and graphics is presented. In addition, the website gives information on the biography, of exhibitions and an overview of the publications. Since summer 2010 Matthias Haase offeres a painting workshop for trainees, graduates and students. The course includes a wide range to test and deepen own artistic skills in painting, drawing, collage and other techniques with the pictorial creating. In practical work participants shall be sensitized to see and will work out the composition, the rhythm of forms, the use of colours and contrasts, and how works in an exhibition look well harmonic together each other. Useful information is given through the website www.malerei-workshop.de . About “Blaupumpe” ("blue pump"): "Blaupumpe" ("blue pump") is the first publication of Matthias Haase that has been published by Josef Spiegel, in cooperation with the NRW district Borken and Foundation Schöppingen, 2004. The title "Blaupumpe" ("blue pump") is a neologism that is a reference to Romanticism (blue color) and the briquette industry "Schwarze Pumpe" ("black pump") – a district of Spremberg in Brandenburg (East Germany in former times). "Blaupumpe" ("blue pump") shows figurative paintings, e.g. drawings, watercolours, and paintings such as "Landscape with Argonauts" (in reference to Heiner Müller), “Ufer” (“shore”), “Arbeiter” ("worker") and “Schläfer” ("Sleeper"). Further information is available on www.blaupumpe.de .Press contact: Matthias Haase c / o Haase & Martin Zeitenströmung Building 32 Königsbrücker Street No 96 01099 Dresden GermanyPhone: +49 (0) 351 / 500 97 21 E-mail: info@matthiashaase.com Web: www.matthiashaase.com

09-12-2006 | Arts & Culture
Matthias Haase
Tour of the Galleries in Leipzig results in SMS Installation
Dresden, 12.09.2006. After the Tour of the Galleries in Leipzig last Saturday the New Media artist and painter Matthias Haase installed a SMS chat system at a party labelled „I'm Lovin' it“. The event was hosted by a new night club known as „BAR“ located in building number 10 at Baumwollspinnerei where galleries and exhibition spaces opened new exhibitions that weekend. Next to dancing to electronic music by the Djs