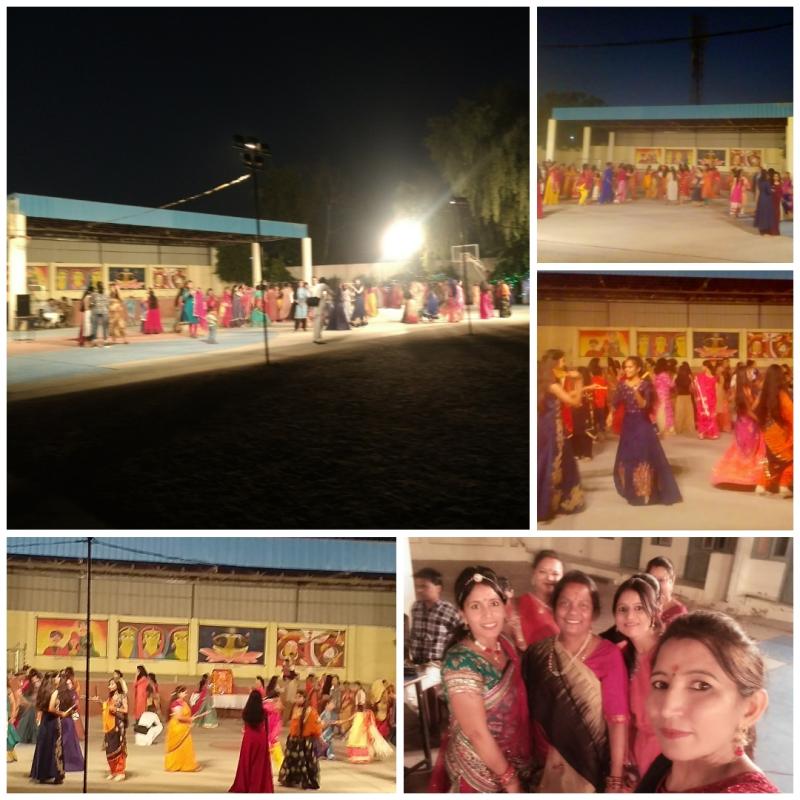 Navratri is a Hindu festival dedicated to the worship of Goddess Durga and her nine avatars for a period of nine days. There are five Navratris in a year, out of which two are celebrated widely. One is Sharad Navratri, or Maha Navratri, which coincides with the popular Durga Puja and concludes with Dussehra and is celebrated around September - October. The other is Chaitra Navratri, which is celebrated in the Hindu month of Chaitra, which falls around March - April. The three other less celebrated Navratris are Gupt (Ashadha) Navratri (June – July), Paush Navaratri (December – January) and Magh (Gupt) Navratri (January – February). Garba and Dandiya are an integral part of the Maha Navratri celebrations. The fact is that Garba is performed before Aarti, a ritual in honour of the goddess, while Dandiya is performed after completion of Aarti, as a part of merriment. While Garba is performed to invoke the goddess, Dandiya symbolizes a mock fight between the goddess and the demon king Mahishasura. Right from its inception, Smt Jamuna Mishra Academy - JMA Pilani has embarked on a rich tradition of celebrating various days of national and international significance and festivals which makes it a cut above the rest schools in Pilani. Alumni of JMA Pilani are pursuing higher education in various institutions which include Birla Institute of Technology and Science BITS Pilani which is one of the Institutions of Eminence and Banasthali Vidyapith which is not only in various QS Rankings but also in Times Higher Education THE World Rankings as one among the best 3 - 4% global universities and Second Best Women’s University in the world. On 07 Oct 2019, which is the Maha Navami day evening, the school ground was all set for the celebrations. Principal Mrs Booma Natarajan triggered the celebrations after the customary puja and arti was performed. Peaking with passion, JMA students and teachers dressed in colourful embroidered ghagra-cholis energetically whirled and moved their feet and arms in a choreographed manner to the rhythm of the music and drumbeats. The teachers matching step to step and beat to beat with the students was indeed a treat to watch.During the Navratri celebrations, the students and teachers of JMA Pilani indeed add a spectrum of colours and gaiety as well as rise above caste and creed and develop mutual respect for all religions. The students and teachers who had a Razzle Dazzle at the Dandiya Garba for JMA Navratri celebrations left with beaming faces and pride that they were indeed part of a top ranking institution which is a shining jewel in the crown among the schools at Pilani.For more details about JMA Pilani see http://www.jmapilani.org/Default.aspxMrs Booma Natarajan, M.Sc., M.A., B.Ed. Principal, Jamuna Mishra Academy – JMA Near Old Pilani Post Office Pilani Rajasthan 333031 India Phone 91-1596-242314 Email booma_pilani at yahoo.co.in Website: http://www.jmapilani.org/Default.aspx FaceBook: https://www.facebook.com/JMAPilaniRajasthanRank1/About JMA Pilani: Jamuna Mishra Academy - JMA Pilani is a Co-educational English Medium School with Experienced Teachers, Spacious Classrooms and Modern Amenities designed to impart Quality Education combined with All Round Personality Development and lay the Best Foundation for the Child’s Future. While the school admits both boys and girls, the girl student enrollment has been steadily rising every year and is presently nearly 50% of the total strength. Right from its inception, JMA Pilani has embarked on a rich tradition of celebrating various days of national and international significance and festivals which makes it a cut above the rest schools in Pilani. The school has for boys and girls Scout and NCC, girls’ band which has been winning laurels every year. NCC cadets of JMA Pilani have also been selected for participation in Republic Day Camp RDC and Shivaji Trail Trek. Yoga, Karate, Painting and Music are not just part of school routine but a way of life for the students.

09-28-2020 | Fashion, Lifestyle, Trends
Srishti Textile
Festival Offer Launching & Stock Clearance Sale at Srishti Textile
As the Festival Season is coming closer and preparations are now running fast, many companies are now launching Special Offers. Srishti Textile from Jaipur is now running 15% Flat Discount over all products in their range. Now, a person can book from a wide range of Clothing and Home Decor items to get for their Navratri and Diwali Celebrations. Also, Srishti Textiles own website is up and running sales
10-22-2018 | Arts & Culture
Banasthali
Banasthali Students Garba Razzle Dandiya Dazzle for Navratri 2018 Celebrations G …
Navratri is a Hindu festival dedicated to the worship of Goddess Durga and her nine avatars for a period of nine days. There are five Navratris in a year, out of which two are celebrated widely. One is Sharad Navratri, or Maha Navratri, which coincides with the popular Durga Puja and concludes with Dussehra and is celebrated around September - October. The other is Chaitra Navratri, which is celebrated in
10-15-2018 | Tourism, Cars, Traffic
Holiday expo
TRAVEL THE COUNTRY… SEE THE WORLD!
TRAVEL THE COUNTRY… SEE THE WORLD! PLAN YOUR NEXT HOLIDAY RIGHT HERE AT 'HOLIDAY EXPO 2018' MORE DESTINATIONS THAN EVER BEFORE, AMAZING PACKAGES, DISCOUNTS ON SPOT BOOKINGS! Dates: 12-14 October 2018 Venue: Kusumtai Wankhede Bhawan, North Ambazzari Road, Dharampeth, Nagpur. Timings: 11.00 am - 7.00 pm Nagpur will be hosting the 14th edition of Holiday Expo, a travel trade exhibition providing B2B and B2C visitors an inroad to striking new destinations. Building on
10-10-2018 | Arts & Culture
Banasthali
Celebrations Galore - Navratri Sthapana, Jeevan Ki Jyoti Shantabai Birthday and …
Every educational institution in India today has a name but only very few like Banasthali have a legacy. The evolution of Banasthali is nothing short of a fairy tale in which the parents freedom fighter and Gandhian Pt Hiralal Shastri and Padma Bhushan & Jamnalal Bajaj Award winner Smt Ratan Shastri took up the mission with passion for setting up an institution at Banasthali to fulfill the desire of their
08-20-2018 | Tourism, Cars, Traffic
Holiday Expo
The 13th Edition Holiday Expo 2018 Tourism and Travel Show was once again a reso …
Vadodara will be hosting the 13th edition of Holiday Expo, a travel trade exhibition providing B2B and B2C visitors an inroad to striking new destinations. Building on the success of the previous editions, team Holiday Expo is all prepared and enthusiastic about creating a cutting edge and bespoke platform for new participants as well as taking their loyal partners to a whole new level of business networking and client acquisition.
10-04-2016 | Leisure, Entertainment, Miscel …
www.hotelmarineplaza.com
Navratra Special! Sattvik Food!
Treat your taste buds this Navratri with mouthwatering vrat ka khanna at Bayview Restaurant, Hotel Marine Plaza from 1st October till 10th October 2016. The newly designed menu is an Ala Carte available for Lunch and Dinner at Bayview. Executive Chef Kshitiz Shekhar have crafted these dishes keeping in mind the ingredients & flavors that are in harmony with the fasting beliefs. The meal is in accordance with the navratra rules
Comments about openPR
9 o'clock: discuss press release with client, 10 o'clock: submit release to openPR, within the briefest possible time release is published and displayed in a prominent place on openPR.de. I am thrilled!
Zehra Spindler, Calypso Now! - Communication Agency