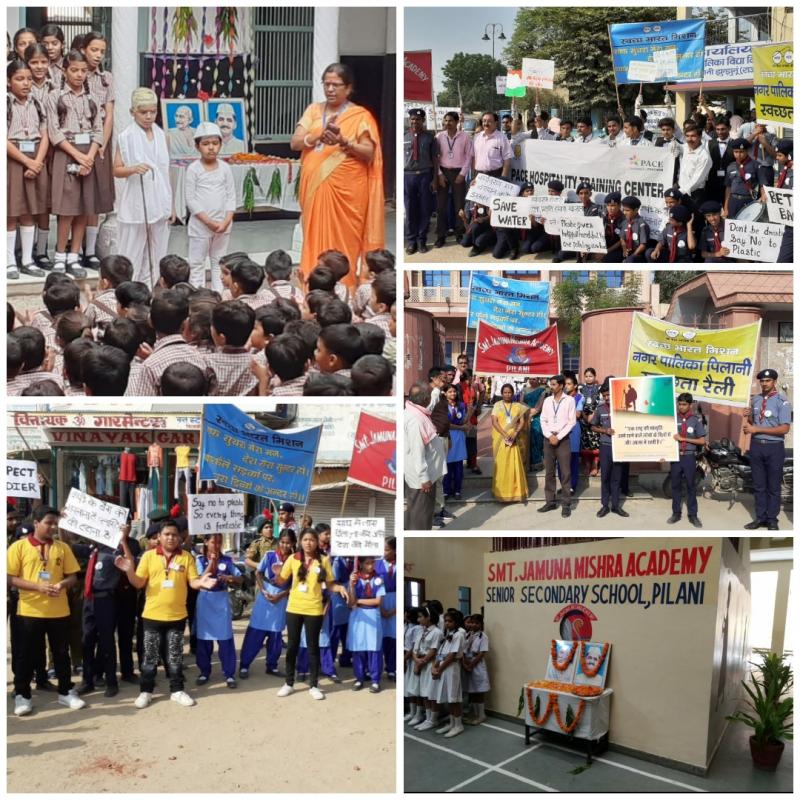 For the school which has established a rich tradition of celebrating various days of national and international importance, observing Gandhi Jayanti is much more than a routine. If there is one educational institution at Pilani in India today where hundreds of students participate in Gandhi Jayanti celebrations, then beyond doubt it must be JMA which is one among the most sought after schools in Pilani. Who else but the Mahatma could have said "Non-violence is the greatest force at the disposal of mankind. It is mightier than the mightiest weapon of destruction devised by the ingenuity of man." Befittingly, the International Day of Non-Violence is marked on 2 October, the birthday of Mahatma Gandhi, leader of the Indian independence movement and pioneer of the philosophy and strategy of non-violence. The message of UN Secretary General Antonio Guterres for the year goes as “Gandhi constantly highlighted the gap between what we do, and what we are capable of doing. On this International Day, I urge each and every one of us to do everything in our power to bridge this divide as we strive to build a better future for all." Incidentally 02 October also marks birthday of Sri Lal Bahadur Sastri who is a tall leader not measured by height but by achievements. Smt Jamuna Mishra Academy JMA was established in the year 2004 at Pilani which is considered as Oasis in the desert state of Rajasthan. Alumni of JMA Pilani are pursuing higher education in various institutions which include Birla Institute of Technology and Science BITS Pilani which is one of the Institutions of Eminence and Banasthali Vidyapith which is not only in various Quacquarelli Symonds QS Rankings but also in Times Higher Education THE World Rankings as one among the best 3 - 4% global universities and Second Best Women’s University in the world. Since 2019 marks 150 years of Gandhiji birthday, the celebrations started from 12 Sep with a Gandhi quote prominently displayed on a board at the school entrance. The program by the junior section 0n 01 Oct 2019 was truly mesmerizing. On 02 Oct 2019 in the senior section after a talk by Principal Mrs Booma Natarajan, a Sarva Dharam Prartna was organized by the highly talented JMA Choir which included the favorite bhajans of Gandhiji such as Vaisnav janto and Raghupathi Raghav Rajaram. Team JMA took a rally with students accompanied by NCC cadets as well as Bharat Scouts & Guides across Pilani town and performed Street Play – Nukad Natak highlighting Swachh Bharat, Say No to Plastic Bags, Save Water, Beti Bachao - Beti Padhao etc at prominent places of Pilani like city centre Bud Chowk (near Raja Birla Haveli), Uttam Super Store junction and Nutan market Pilani bus stand. The events were extensively covered by media.Principal Mrs Booma Natarajan garlanded Gandhi photo as Chief Guest for the celebrations at Pilani Nagar Palika builing and addressed the gathering which was attended by senior officers of Nagar palika. Team JMA also joined the colourful Gandhi Jayanti celebrations at Vidya Vihar Nagar Palika organized by Chairman Dr Rajendra Pareek. When the celebrations concluded, students and teachers of JMA were seen with beaming faces and pride that they were indeed part of an institution which is a shining jewel in the crown among the schools at Pilani.For more details about JMA Pilani see http://www.jmapilani.org/Default.aspxMrs Booma Natarajan, M.Sc., M.A., B.Ed. Principal, Jamuna Mishra Academy – JMA Near Old Pilani Post Office Pilani Rajasthan 333031 India Phone 91-1596-242314 Email booma_pilani at yahoo.co.in Website: http://www.jmapilani.org/Default.aspx FaceBook: https://www.facebook.com/JMAPilaniRajasthanRank1/About JMA Pilani: Jamuna Mishra Academy - JMA Pilani is a Co-educational English Medium School with Experienced Teachers, Spacious Classrooms and Modern Amenities designed to impart Quality Education combined with All Round Personality Development and lay the Best Foundation for the Child’s Future. While the school admits both boys and girls, the girl student enrollment has been steadily rising every year and is presently nearly 50% of the total strength. Right from its inception, JMA Pilani has embarked on a rich tradition of celebrating various days of national and international significance and festivals which makes it a cut above the rest schools in Pilani. The school has for boys and girls Scout and NCC, girls’ band which has been winning laurels every year. NCC cadets of JMA Pilani have also been selected for participation in Republic Day Camp RDC and Shivaji Trail Trek. Yoga, Karate, Painting and Music are not just part of school routine but a way of life for the students.

02-25-2019 | Tourism, Cars, Traffic
Varanasi Trip
Bharat Kala Bhavan to restore Mahatma Gandhi memories
The Bharat Kala Bhavan will showcase 75 paintings and two sculptural work of Mahatma Gandhi who is the Father of the Nation. With this, it will display the life of Gandhi prey and post-independence movement. The special exhibition is termed as “Gandhi “, and it also incorporates the work of various artists such as famous painter MF Hussain, Akbar Padmavati, Nandlal and the rest. Banaras Hindu University is all set
08-13-2018 | Science & Education
Ajeenkya D Y Patil
Varun Gandhi advocates Higher Spend on Research and Development
Excitement and Spirits were at an all time at the D. Y. Patil Campus in Navi Mumbai as they welcomed Varun Gandhi, Loksabha MP from Sultanpur. Also present on this occasion were Dr. Ajeenkya D.Y. Patil and Vijay D. Y .Patil. Dr. Ajeenkya D.Y. Patil, Chairman, Ajeenkya D. Y . Patil Group, in his address expressed deep admiration for the body of social work undertaken by Varun Gandhi and his
10-04-2017 | Science & Education
Banasthali
Banasthali Celebrates Mahatma Gandhi Jayanti - International Day of Non-Violence
A 1946 quote of Mahatma Gandhi says” Bansathali is enshrined in my heart” and undoubtedly Banasthali draws its inspiration from the well known Gandhi quote “What is really needed to make democracy function is not knowledge of facts but right education.” Who else but the Mahatma could have said "Non-violence is the greatest force at the disposal of mankind. It is mightier than the mightiest weapon of destruction devised by
10-04-2016 | Science & Education
JMA Pilani Rajasthan
International Day of Non-Violence Gandhi – Shastri Jayanti Swachh Bharat Combo …
Who else but the Mahatma could have said "Non-violence is the greatest force at the disposal of mankind. It is mightier than the mightiest weapon of destruction devised by the ingenuity of man." The very same Mahatma Gandhi in his book The Story of My Experiments with Truth, 1927 also had said “There are many causes I would die for. There is not a single cause I would kill for."
05-09-2011 | Media & Telecommunications
Mirchi Movies
Gandhi is Still with Us
Mumbai, India - Finding Gandhi, produced by Shethia Audio Video Private Limited, is an introspective movie that focuses on Hasmat Ullah a mechanic and a god-fearing man who’s presented with the responsibility of repairing a Ford V8 car that once held the ashes of Mahatma Gandhi. A bomb explosion suddenly rocks his small community and the ensuing chaos forces him to choose between finishing this repair job, or taking to the
01-10-2011 | Arts & Culture
Ocean Villas Group Pte. Ltd.
Mahatma Gandhi South African home named Satyagraha
We recently reported that the former South African home of Mahatma Gandhi was up for sale and that Coal India Limited were making their second attempt to buy the property. We have since discovered this information to be incorrect. Read original Gandhi article: http://blog.oceanvillasgroup.com/mahatma-gandhi-south-african-home-up-for-sale/ The Gandhi house is, in fact, currently owned by Voyageurs du Monde Group who bought the home in September 2009 and it is not for sale. Voyageurs du Monde is
Comments about openPR
I can't but agree to the positive statements about your portal: easy to use, clear layout, very good search function, and quick editing!
Jens O'Brien, Borgmeier Media Communication