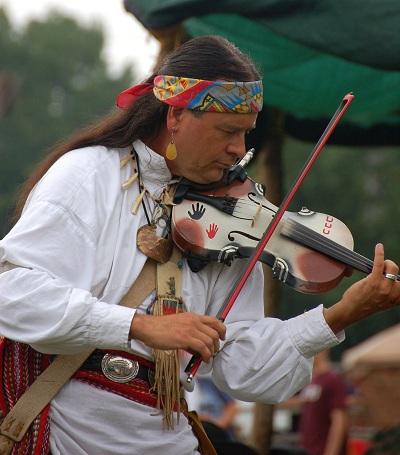 Wife Kimberly survives deadly F5 tornado in Ider, Alabama. Dog perishes.CHATTANOOGA, TN (June 6, 2011) – Internationally acclaimed Native American flutist and violinist Arvel Bird is excited to return to Alabama for a small, intimate performance, at Globe Unplugged in Florence, AL on June 11 at 5 p.m. From there he’ll return to Chattanooga, TN where his wife ended up being transported after being buried in the rubble of a tornado damaged home in Ider, Alabama. Arvel will perform at the Riverbend Festival June 15, on Chattanooga’s 21st Century Riverfront on the Unum Stage from 6:45 to 8:00 pm.Arvel Bird is feeling blessed to be back on tour after his wife Kimberly Kelley miraculously survived the deadly tornado in Alabama on April 27. That evening, Arvel found himself driving into the active tornado area to reach his wife who was buried in the rubble of what was left of a friend’s home in Ider, Alabama. About 7 p.m. that evening, Kimberly, along with Frank Taylor and his family and Kimberly’s two dogs Candy and Coco, huddled in an interior bathroom as the F5 tornado forged a direct hit on the Taylor home. Minutes later, Kimberly gained consciousness to discover she was alive, but buried with other family members in the rubble.“We were trapped under a collapsed wall, the fiberglass shower stall and an antique piano,” said Kelley of the experience. “From what I've heard, I was blown through the bathroom cabinet, an inside wall, and an outside wall. It is a miracle that all of us survived.” Her precious Shih Tzu Candy, however, perished in the tornado. Family members and neighbors frantically dug to rescue everyone trapped in the home. “I am truly grateful to the neighbors, the Ider, Alabama Rescue Squad and Volunteers, the EMS members who transported us to the Chattanooga Erlanger ER, and especially Ider Mayor Mike Flynn who drove Coco to meet up with Arvel at the hospital. We owe them all so much,” said Kelley.Arvel Bird was staying near Atlanta, Georgia at the time, preparing for a four-day festival at the Georgia Frontier Days. When he received Kimberly's call just minutes after being rescued from underneath the rubble, he jumped in his car and headed toward the ravished tornado area. “I didn’t hesitate. Kimberly is one of the strongest women I know, but her voice told me all I needed to know that night. I just had to get to her side,” said Bird. “With the help of a friend who was watching the weather on Channel 2 in Atlanta, I was literally skirting the edges of the tornadoes as they swept through Alabama and Georgia as I drove to meet Kim in the emergency room in Chattanooga, TN. I don’t think it really hit me what Kim had just been through until I went back to the site the next day to salvage what was left.”Luckily, Kim did not have any broken bones, but was severely battered and bruised, with injuries to her neck, back, elbow, hips and pelvis. Her recovery has been slow, and walking is very painful, but she is improving a little each day.“While this is a setback, we are blessed to have survived when others did not,” said Kelley. “I couldn't have done it without Arvel there at the hospital all 15 hours. Our hearts and prayers go out to everyone who lost a loved one or who was injured in the tornadoes across the country that evening. An experience like this changes one’s life, and reminds us of the truly important things -- friends and family.”Globe Unplugged, Florence AL: Seating is limited. Email: str52@comcast.net or call 256/867-4656 for location and details.Riverbend Festival, Chattanooga, TN: Visit http://www.riverbendfestival.com/pages/general-information for more information or call 423-756-2211. Gates open at 4:30 p.m. One-night wristbands are $24 and can be purchased at any entry gate of the festival. Senior citizen and military one-night discounts are $12. Children 10 years old and under are admitted free.About Arvel Bird: Award-winning Native American Flutist/Violinist Arvel Bird is known around the world for his dramatic connection between Native American and Celtic traditions, consistently playing to sell-out crowds. Dubbed "Lord of the Strings" by fans and music critics, his music evokes the soul of North American history and is thoroughly entertaining, but also enlightening and humanizing. Classically trained on the violin, Bird began his career touring with country legends Glen Campbell, Loretta Lynn, and Louise Mandrell before embarking on his solo career. He now tours 365 days a year, entertaining audiences around the world. Bird has release two new albums this year: Storyteller, which captures the captivating stories Arvel tells during live performances, and From the Heart of a Paiute, a flute album dedicated to the many Native American Flute Makers and their flutes. For more information about legendary Arvel Bird and how to purchase his albums, visit www.arvelbird.com.Jody Roberts Native Spirit PR & Entertainment 2447 S. Taylor Road Cleveland Heights, OH 44118 216-798-3349