Atlasses and Other Discoveries: Auction of Rare Books in Hamburg – PATHBREAKING 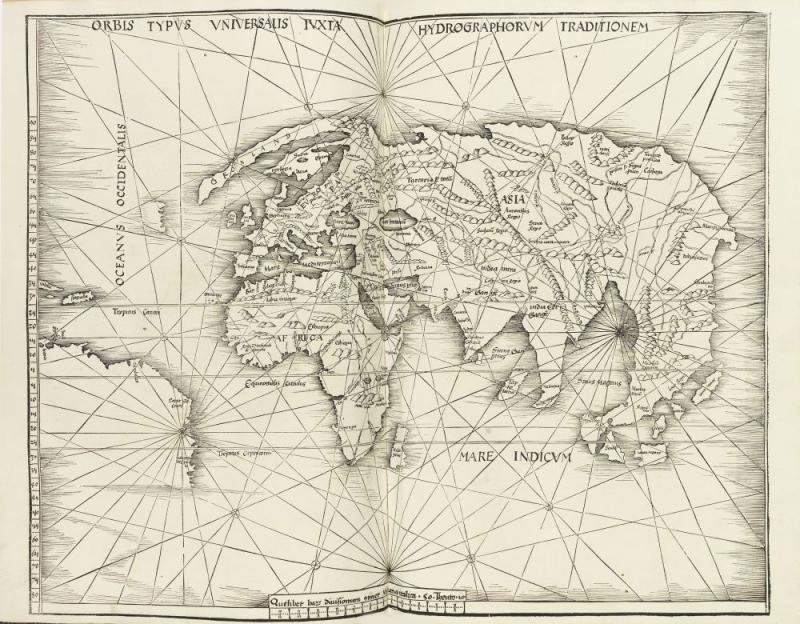 Hamburg, May 28, 2019 (kk) – No other auction house has implemented more radical changes than Ketterer Kunst. That pays off now: With total proceeds of more than € 2 million* the Rare Books department realized its best result ever with yesterday‘s auction in Hamburg, Germany. The TOP 5No. 023: Claudius Ptolemaeus – Geographiae opus novissima traductione, Strasbourg 1513. € 300,000* Calling price: € 100,000No. 189: Marc Chagall – Daphnis & Chloé, Paris 1961. € 148,000* Calling price: € 100,000No. 039: Pierre Joseph Redouté – Les liliacées, Paris 1802-16. € 110,000* Calling price: € 85,000No. 061: Friedrich Nietzsche – Also sprach Zarathustra, Leipzig 1908, in a master binding by Otto Dorfner. € 100,000* Calling price: € 10,000 No. 052: Karl Marx – Das Kapital, volume 1, Hamburg 1867. € 74,000* Calling price: € 25,000“This outstanding result was realized with just 488 lots, that is just one third of the range of offers in former auctions. It clearly shows that our concept of a sharp reduction of objects works out well“, explains company owner Robert Ketterer. He continues: ”With this innovative step into the future our house also manifests it leading position as trend-setter. According to Christoph Calaminus, auctioneer and department head, “it was a fantastic auction“. “The top class range of offerings convinced book lovers all over the world. Four lots even crossed the magic € 100,000 line.“ The auction was led by what presumably is the most important edition of the “Geographia“ (lot 23) from Claudius Ptolemaeus, the first atlas with a map of America. It was in demand with phone bidders from Switzerland, Germany, the Netherlands and Great Britain. At the end of a fervid bidding skirmish a German art dealer stood his grounds also against a number of commissions and a tough competitor in the saleroom with the grand sum of € 301,350* granted over the phone. The pathbreaking maps by Martin Waldseemüller, especially the eponymous map of America, were largely responsible for the great success. Second place in the auction ranking is occupied by an artist book by Marc Chagall. It took a Northern German bidder in the saleroom € 147,600* to beat commissions from the US to win the famous lithographic cycle “Daphnis & Chloé“ (lot 189).Pierre-Joseph Redouté‘s flowery masterwork “Les liliacées“ (lot 39), the most splendid and most elaborate book by the most important flower painter of all times, went to a Swiss dealer for a result of € 110,700* who had to stand his grounds against German colleagues.A large number of book lovers from all over Europe made sure that Friedrich Nietzsche‘s “Also sprach Zarathustra“ (lot 61) saw the auction‘s sharpest increase - a ten-fold of the starting price of € 10,000. Endowed with the seminal makeup of Henry van de Velde and in a sensational master binding from Otto Dorfner, a Swiss art trader on the phone honored the work with a result of € 100,860*. Neither competing phones from all over Germany and the Netherlands nor the written bid from a library or the German and English book lovers in the saleroom were able to keep up with the pace.A collector from the Benelux won “Das Kapital“ (lot 52) by Karl Marx for a result of € 73,800* over the phone. Online bidders from all over Europe, who for the first time joined the auction through Ketterer Kunst‘s own platform, as well as phone bidders from Germany and Switzerland, and half a dozen commissions, among them some from the USA, entered the bidding race.Francesco Colonna‘s “Hypnerotomachia Poliphili“ (lot 13) had a similarly strong international appeal. Half a dozen phone bidders from Italy, Great Britain and Switzerland and a good number of commissions entered bidding for the famous Italian Renaissance book at a starting price of € 14,000. The bidding frenzy lasted on until it was stopped by an English art dealer at € 66,420*. More interesting results were realized by, among others, the following:No. 026, Jan Huygen van Linschoten, Itinerarium. Calling price € 43,000, result € 62,730* No. 033, Georges Louis Leclerc de Buffon, Histoire naturelle. Calling price € 20,000, result € 36,900*No. 021, Flavius Josephus, Historien und Bücher. Calling price € 5,000, result € 34,440* Unsold objects are offered in the post auction sale until June 28, 2019.* The rounded result is the hammer price + 23 percent buyer‘s premiumYour Press Contact: Ketterer Kunst Joseph-Wild-Str. 18 81829 München GERMANY Michaela Derra M.A. Tel.: +49-(0)89-55244-152 Fax +49-(0)89-55244-177 E-Mail: m.derra@kettererkunst.de Your contact in the Rare Books Department:Ketterer Kunst GmbH Holstenwall 5 20355 Hamburg GERMANY Christoph Calaminus Tel.: +49-(0)40-374961-11, Fax-66 E-Mail: c.calaminus@kettererkunst.de www.ketterer-rarebooks.deThe family company Ketterer Kunst (www.kettererkunst.com and www.ketterer-internet-auctions.com), with headquarters in Munich and branches in Hamburg, Duesseldorf, Berlin and the USA, was founded in 1954. It is one of the leading European houses for auctions of Fine Art from the 19th to the 21st Century and Rare Books. The latest art market review for Fine Art 2018, compiled by artprice.com, ranks Ketterer Kunst on place 16 in the global TOP 100. The auctioneer's clientele predominantly consists of international collectors, art dealers, curators and museums.

You can edit or delete your press release Atlasses and Other Discoveries: Auction of Rare Books in Hamburg – PATHBREAKING here

08-30-2018 | Business, Economy, Finances, B …
Skyfi
BLOCKCHANCE Conference Hamburg 2018 - a full success!
The first BLOCKCHANCE Conference on August 24 and 25 in Hamburg, with the topic ‘the future of economics’ was a great success with over 350 attendees, 35 speakers and exhibitors and more than 25 press members and media agencies. It was the biggest blockchain conference in north Germany in 2018. Next step: BLOCKCHANCE Conference Hamburg 2019 on August 23 and 24 – save the date. BLOCKCHANCE Conference Hamburg 2018 gallery
07-04-2018 | IT, New Media & Software
Skyfi
BLOCKCHANCE Conference Hamburg 2018
BLOCKCHANCE Conference, August 24th-25th 2018 in the HafenCity of Hamburg with subtitle, ‘Bitcoin was just the beginning - blockchain is the future of economics’, shows the socio-economic impact of the coming blockchain revolution. Plus free Skycoin Miner Hardware and VEGANcoins giveaway Hamburg, July 4th 2018 - The BLOCKCHANCE Conference Hamburg 2018 ‘The future of economics’ opens its doors for two days at August 24th and 25th. It creates a platform
09-28-2011 | Science & Education
LEGO Education Europe
LEGO Education Innovation Studio opens in Hamburg
Secretary of Education for Hamburg attends the launch of the LEGO® Education Innovation Studio at the Richard-Linde-Weg Academy Students at the Richard-Linde-Weg Academy along with the Secretary of Education for Hamburg Ties Rabe, and LEGO® Education celebrated the opening of their new LEGO Education Innovation Studio last week. The Studio provides an innovative and creative space for the students to study and learn. It incorporates storage, durable, multifunctional furniture and at the
04-21-2011 | Business, Economy, Finances, B …
German-Indian Round Table (GIRT)
Indo-Hamburg Relations: On A Promising Path?
GIRT Hamburg invites Consul General Subashini to share views on India’s ties with Hamburg, on May 2, 2011 Hamburg (19.04.2011): India’s emergence as an increasingly open and growing economy has led to a more active interaction with Germany. The liberalization of India’s economy and the ensuing growth in the bilateral trade has opened new avenues for cooperation not only in the business sector but also in other social and cultural spheres.
12-01-2010 | Arts & Culture
PHOTO+ART BOOK HAMBURG
PHOTO+ART BOOK HAMBURG 2011 in Germany
From 2nd – 4th September 2011 the Haus der Photographie, Deichtorhallen Hamburg, Germany celebrates the premiere of the PHOTO+ART BOOK HAMBURG. This new fair focuses on the printed publication as an autonomous form of artistic expression. It accommodates not just a variety of exciting stalls but also offers exhibitions, workshops, lectures and booksignings. The PHOTO+ART BOOK HAMBURG addresses professionals, artists, creative individuals, printers, interested amateurs as well as book and
04-22-2010 | Arts & Culture
PHOTOBOOK DAYS 2010
Premiere PHOTOBOOK DAYS 2010 in Hamburg, Germany
The Photobook Days will be opened for the first time in the Deichtorhallen Hamburg 4th-6th June 2010. The venue is the House of Photography in the Deichtorhallen Hamburg. For three days the visitors will receive an extensive program: Lectures, book signings, dummy sightings, a photo book award, photo book fair and exhibitions. The Photobook Days 2010 are honoring the independence of photo books by dedicating this festival to it.
Comments about openPR
I can't but agree to the positive statements about your portal: easy to use, clear layout, very good search function, and quick editing!
Jens O'Brien, Borgmeier Media Communication