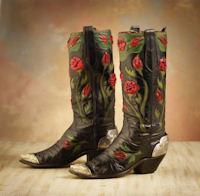 With cap pistols and stick horses kids like me in the 1950s did what we could to imitate TV western heroes like Roy Rogers and Dale Evans. Why not? Roy was the “King of Cowboys” and Dale Evans was his superstar wife and sidekick. Separating fact from fiction didn’t mean a lot. As far as I could tell, this cowboy and cowgirl were the stuff of legend. The plot in these early cowboy shows was simple too. Lots of optimism and comedy. Plus, the good guys always won. Western television shows were made for kids. Ten-gallon hats, fringed Western wear, hand-tooled boots, six-guns, it was simply the best. “Cowboys weren't allowed to kiss girls in pictures, so one time I gave Dale a little peck on the forehead and we got a ton of letters to leave that mushy stuff out... So I had to kiss Trigger instead,” Roy said. No one is more closely associated with 1950’s television western heroes than Roy Rogers. He was what he was—a good guy. On Jan. 29-20, High Noon Western Americana held its annual Antique Show & Auction in Mesa, AZ. Featured in the auction was a selection of western memorabilia from television and movie greats including Tom Mix, The Lone Ranger, Matt Dillon, Gene Autry and Roy Rogers. Roy Rogers’ custom-made Rose Parade Boots made by Houston bootmaker and marksman Joe Bowman; 1940s; sold in the auction for $10,350.Read the full sampler story at LiveAuctionTalk.comRosemary McKittrick is a storyteller. With telling detail her weekly column brings the collecting world to life.• One of the largest “Live” auction article databases on the Internet. • Over 850 articles including photographs are currently available. • Free weekly subscription to the updated articles.info@liveauctiontalk.com 40 Calle Debra Santa Fe, NM 87507 505-989-7210

You can edit or delete your press release Roy Rogers TV Cowboy Legend This Week at LiveAuctionTalk.com here

09-20-2011 | Sports
LiveAuctionTalk
Roberto Clemente Baseball Player and Humanitarian This Week at LiveAuctionTalk.c …
Pittsburgh Pirate legend Roberto Clemente opened the door of professional baseball in the United States for Latino players. Growing up poor in Puerto Rico, Roberto started playing ball on muddy fields with a glove made out of a coffee sack and a bat fashioned out of wood from a guava plant. He loved the game and grew up to be pure grace on the baseball field. During
09-05-2011 | Sports
LiveAuctionTalk
Willie Mosconi Billiards Master This Week at LiveAuctionTalk.com
Willie Mosconi was to pocket billiards what Michael Jordan was to basketball. From 1941 through 1956 Willie won the world pocket billiards championship 13 times in 15 years. He also won Cushion Billiards world championships (pool played without pockets)--a rare champion in both sports. In a 1954 pool exhibition Willie managed to land 526 balls in a row without a miss. “The Mosc” as fans nicknamed
08-23-2011 | Arts & Culture
LiveAuctionTalk
Marilyn Monroe Legacy This Week at LiveAuctionTalk.com
Marilyn Monroe was willing to do whatever it took to become the beauty she fantasized about as a teenager. Her sculpted image of herself continued until her death. A trim figure, tight sweaters, see-through, skin-revealing gowns, makeup, hair coloring, she systematically created the image of the touchingly vulnerable blonde bombshell. Her blue eyes and big smile was a bonus. “I’ve never see anyone stop a
08-09-2011 | Arts & Culture
LiveAuctionTalk
James Dean Icon of a Generation This Week at LiveAuctionTalk.com
In death, James Dean became a global megastar. When he passed away in 1955 he had only completed three movies. He was 24-years-old and died in a car accident near Paso Robles, Calif., on the way to a sports car meet. Only one of his movies “East of Eden” loosely based on the novel by John Steinbeck, had been released. After his death two more