Roberto Clemente Baseball Player and Humanitarian This Week at LiveAuctionTalk.com 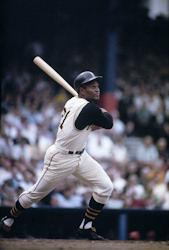 Pittsburgh Pirate legend Roberto Clemente opened the door of professional baseball in the United States for Latino players. Growing up poor in Puerto Rico, Roberto started playing ball on muddy fields with a glove made out of a coffee sack and a bat fashioned out of wood from a guava plant. He loved the game and grew up to be pure grace on the baseball field. During his 18 year career as a right fielder with the Pirates he won four batting titles, was awarded 12 Gold Glove Awards, played in 14 All-Star games, named the most valuable player, and helped lead the Pirates to championships in 1960 and 1971. He ended his career with 3,000 hits. “Clemente can catch a ball in New York and throw out a runner in Pennsylvania,” said one TV broadcaster. And he was dead on accurate doing it. The Pirates signed Clemente at the end of the 1954 season. The team had finished dead last for three years in a row and hadn’t won a World Championship in more than 30 years. They needed juice.Jumping up against walls, diving for catches, missile-like throws, scalding line drives, Clemente was exhilarating to watch. Once he even scored an inside-the-park grand slam. Beyond being a world-class ballplayer Roberto was a humanitarian. On a rainy New Year’s Eve in 1972 he sat in a San Juan airport waiting for mechanics to fix an old plane that would take him to Nicaragua. The plane was full of food, medicine and supplies for earthquake survivors. The plane’s engines failed shortly after takeoff and crashed into the ocean. No survivors.On May 11, Grey Flannel Auctions in Westhampton, N.Y., featured a selection of Roberto Clemente items in its Summer Games auction. A Roberto Clemente, Pittsburgh Pirate, game-used Flannel Vest; player number 21 on back; across the front “Pirates” sold for $55,152. Read the entire article at LiveAuctionTalk.com.If you’re looking for interesting stories about the world of art, antiques and collectibles, Rosemary McKittrick’s website is a good place to look. Sign up for a free subscription.info@liveauctiontalk.com 40 Calle Debra Santa Fe, NM 87507 505-989-7210

You can edit or delete your press release Roberto Clemente Baseball Player and Humanitarian This Week at LiveAuctionTalk.com here

09-05-2011 | Sports
LiveAuctionTalk
Willie Mosconi Billiards Master This Week at LiveAuctionTalk.com
Willie Mosconi was to pocket billiards what Michael Jordan was to basketball. From 1941 through 1956 Willie won the world pocket billiards championship 13 times in 15 years. He also won Cushion Billiards world championships (pool played without pockets)--a rare champion in both sports. In a 1954 pool exhibition Willie managed to land 526 balls in a row without a miss. “The Mosc” as fans nicknamed
08-23-2011 | Arts & Culture
LiveAuctionTalk
Marilyn Monroe Legacy This Week at LiveAuctionTalk.com
Marilyn Monroe was willing to do whatever it took to become the beauty she fantasized about as a teenager. Her sculpted image of herself continued until her death. A trim figure, tight sweaters, see-through, skin-revealing gowns, makeup, hair coloring, she systematically created the image of the touchingly vulnerable blonde bombshell. Her blue eyes and big smile was a bonus. “I’ve never see anyone stop a
08-09-2011 | Arts & Culture
LiveAuctionTalk
James Dean Icon of a Generation This Week at LiveAuctionTalk.com
In death, James Dean became a global megastar. When he passed away in 1955 he had only completed three movies. He was 24-years-old and died in a car accident near Paso Robles, Calif., on the way to a sports car meet. Only one of his movies “East of Eden” loosely based on the novel by John Steinbeck, had been released. After his death two more
07-25-2011 | Leisure, Entertainment, Miscel …
LiveAuctionTalk
Houdini Master of Magic This Week at LiveAuctionTalk.com
Handcuff King. Escape artist. There didn’t seem to be any coffin, leg iron or prison cell Harry Houdini couldn’t escape. He was America’s first superhero in the early-20th century. Buried alive, drowning—Harry played out our worst nightmares and managed to escape each and every time. The one thing Harry couldn’t escape in February, 1902 was an accusation of bribery and fraud brought against him by a