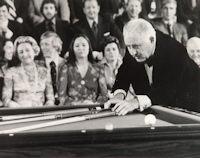 Willie Mosconi was to pocket billiards what Michael Jordan was to basketball. From 1941 through 1956 Willie won the world pocket billiards championship 13 times in 15 years. He also won Cushion Billiards world championships (pool played without pockets)--a rare champion in both sports. In a 1954 pool exhibition Willie managed to land 526 balls in a row without a miss. “The Mosc” as fans nicknamed him possessed a real passion for the sport reportedly practicing six hours a day for seven days a week over a 30 year period. Willie’s long-term sponsorship with Brunswick Corporation gave him the time and space to get great. Born in Philadelphia in 1913, the young pool shark turned to the game early. At age four he was spotted pushing crates over to his father’s pool table after each shot so he could get a better look at the table top. He was also caught more than once shooting potatoes with a mop handle around the pool table. One of Willie’s most publicized games happened in 1978 between him and Minnesota Fats. The competition was televised on ABC’s “Wide World of Sports.” Both men were 65 but you would never have known it by the skill each player demonstrated. Willie’s razor-sharp accuracy prevailed and he won the game. Willie died of a heart attack on Sept. 12, 1993. He has been called the greatest player in the history of the game.On May 14, Hunt Auctions held its Important Sports Memorabilia Auction in Chicago. Featured in the sale was a selection of items belonging to Willie.His favorite pool cue produced by Russian master George Balabushka with a Burton Spain forearm, four Ebony colored points, five colored veneers; diamond mother-of-pearl inlays; including eight shafts sold for $92,000. Read the full story at LiveAuctionTalk.comIf you’re looking for interesting stories about the world of art, antiques and collectibles, Rosemary McKittrick’s website is a good place to look. Sign up for a free weekly subscription.info@liveauctiontalk.com 40 Calle Debra Santa Fe, NM 87507

You can edit or delete your press release Willie Mosconi Billiards Master This Week at LiveAuctionTalk.com here

09-20-2011 | Sports
LiveAuctionTalk
Roberto Clemente Baseball Player and Humanitarian This Week at LiveAuctionTalk.c …
Pittsburgh Pirate legend Roberto Clemente opened the door of professional baseball in the United States for Latino players. Growing up poor in Puerto Rico, Roberto started playing ball on muddy fields with a glove made out of a coffee sack and a bat fashioned out of wood from a guava plant. He loved the game and grew up to be pure grace on the baseball field. During
08-23-2011 | Arts & Culture
LiveAuctionTalk
Marilyn Monroe Legacy This Week at LiveAuctionTalk.com
Marilyn Monroe was willing to do whatever it took to become the beauty she fantasized about as a teenager. Her sculpted image of herself continued until her death. A trim figure, tight sweaters, see-through, skin-revealing gowns, makeup, hair coloring, she systematically created the image of the touchingly vulnerable blonde bombshell. Her blue eyes and big smile was a bonus. “I’ve never see anyone stop a
08-09-2011 | Arts & Culture
LiveAuctionTalk
James Dean Icon of a Generation This Week at LiveAuctionTalk.com
In death, James Dean became a global megastar. When he passed away in 1955 he had only completed three movies. He was 24-years-old and died in a car accident near Paso Robles, Calif., on the way to a sports car meet. Only one of his movies “East of Eden” loosely based on the novel by John Steinbeck, had been released. After his death two more
07-25-2011 | Leisure, Entertainment, Miscel …
LiveAuctionTalk
Houdini Master of Magic This Week at LiveAuctionTalk.com
Handcuff King. Escape artist. There didn’t seem to be any coffin, leg iron or prison cell Harry Houdini couldn’t escape. He was America’s first superhero in the early-20th century. Buried alive, drowning—Harry played out our worst nightmares and managed to escape each and every time. The one thing Harry couldn’t escape in February, 1902 was an accusation of bribery and fraud brought against him by a