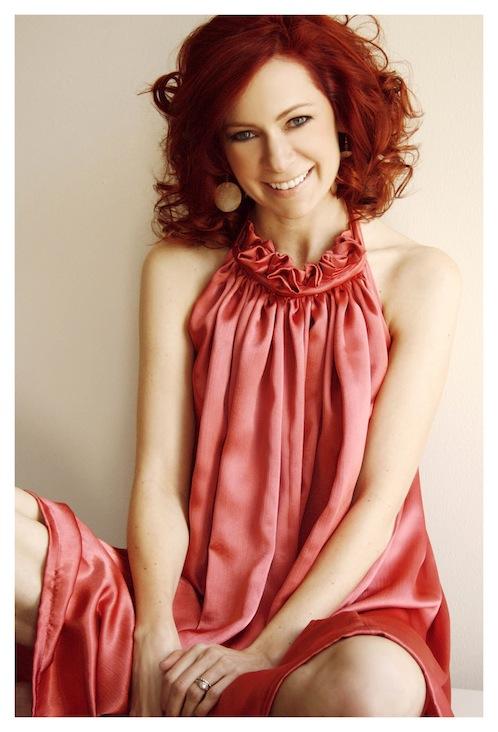 Indianapolis, IN (May 10, 2011) - On Saturday, June 4, 2011, TV and film actress Carrie Preston, star of HBO’s hit “True Blood” series, and husband Michael Emerson, star of ABC’s hit series “Lost,” will attend The New Harmony Project for 2011 Conference’s 25th Anniversary Benefit Celebration beginning at 6 p.m. in New Harmony, Indiana. As the president of the board, Preston has been involved in helping plan and organize each conference for the past six years. The June 4th gala event will consist of a dinner with the community of this year's professional artists, writers, directors, actors, etc., as well as feature live readings of selected scenes from plays and musicals that have been developed at The New Harmony Project over the years. Both Preston and Emerson will act in their own scene during the event.In addition, the 25th annual New Harmony Project (NHP) conference will be held May 23 through June 4, 2011, in New Harmony, Indiana. Free and open readings are held throughout the run. Full-development projects will have benefit of a two-week workshop with a professional director, dramaturg, and a company of actors selected specifically to work with the writers to further develop their scripts. Writers-in-residence, generally more seasoned writers, attend to work on scripts of their choosing. This year’s selection panel, which includes not only board and staff, but also Artistic Director Paul Walsh, and playwright/TV screenwriter Jim Leonard, Jr. ("Dexter", "The Closer"), reviewed 180 scripts submitted from some of the nation’s best writers.Preston says, “We have an amazing line up this year. Three of the writers — Alex Lewin, John Walch and screenwriter Travis Fine are with us for the first time. Award-winning playwrights/screenwriters Theresa Rebeck and Dan O’Brien are returning. We are also honored to have Pulitzer prize-winning playwright/screenwriter Robert Schenkkan, author of The Kentucky Cycle, Meredith Stiehm, creator of the hit TV show "Cold Case," and Sherwood Award finalist Lina Patel as writers in residence."NHP was founded in 1986 by a group of theater, film, and television professionals in Indianapolis to encourage writers whose work celebrates hope and the resiliency of the human spirit. Scripts are chosen for development at the conference through an open submissions process that invites writers from across the country to submit projects for consideration that fit the spirit and the mission of The New Harmony Project: scripts that “name, celebrate, honor and praise order in the midst of chaos; life in the midst of death; atonement in the midst of separating hatred; liberty in the midst of oppression; sacrifice in the midst of vanity; and spirit in the midst of corruption.” NHP is a not-for-profit organization dependent upon gifts and grants from many individuals, foundations, and corporations and from the National Endowment for the Arts. Learn more at:www.newharmonyproject.org. For more media inquiries about Carrie Preston, please contact Mona Loring at contact@monaloring.com or (323) 462-8080. ###About Carrie Preston, President, NHP CorporationCarrie Preston is an actor, director and producer. She currently plays Arlene Fowler, the red-headed waitress on HBO’s “True Blood”. Other film and television credits include "Duplicity"; “That Evening Sun”; “Towelhead”; “Vicky Christina Barcelona”; ”Transamerica”; “Lovely by Surprise”; “Straight-Jacket”; "The Stepford Wives"; "My Best Friend's Wedding"; "Mercury Rising”; “The Good Wife”; "Lost"; "Desperate Housewives"; "Private Practice"; “Numbers”; "Arrested Development"; "Sex and the City"; “Law and Order: Criminal Intent”; “Wonder Falls”; “Hope and Faith”; “Good Morning, Miami”; "Spin City” and the upcoming films: “A Bag of Hammers” with Rebecca Hall and “What’s Wrong with Virginia?” with Jennifer Connelly. NY theater credits include Broadway: “Festen”, “The Rivals”, “The Tempest” Off-Broadway: "Cycling Past the Matterhorn"; “Chaucer in Rome” ;“Straight-Jacket”; "Freedomland" ;"The Libertine”; "Antony and Cleopatra". Regionally she has appeared at the McCarter, The Guthrie, Baltimore Center Stage, Alabama Shakespeare, Georgia Shakespeare, Shakespeare Santa Cruz, Utah Shakespeare, and California Shakespeare. With her production company, Daisy 3 Pictures, she just directed the feature film, “That’s What She Said”, written by Kellie Overbey, starring Anne Heche. She also directed the feature film “29th and Gay” by James Vasquez (released by TLA) and the short film “Feet of Clay” by David Caudle. She executive produced and starred in James Vasquez’s “Ready? OK!”, which played over 50 film festivals and won numerous awards and is available on DVD from Wolfe Video. She studied acting at the University of Evansville and Juilliard. She is married to the actor Michael Emerson.About The New Harmony ProjectIn a community of professional and supportive people, The New Harmony Project seeks out and serves those writers and helps develop and promote those scripts that explore the human journey by offering hope and showing respect for the positive values of life. We will assay the integrity of the work by asking, “What does it do? Does it do it well?” Briefly, it should name, celebrate, honor and praise order in the midst of chaos; life in the midst of death; atonement in the midst of separating hatred; liberty in the midst of oppression; sacrifice in the midst of vanity; and spirit in the midst of corruption.MLC PR 7080 Hollywood Blvd Los Angeles CA 90028 Mona Loring, Publicist/President