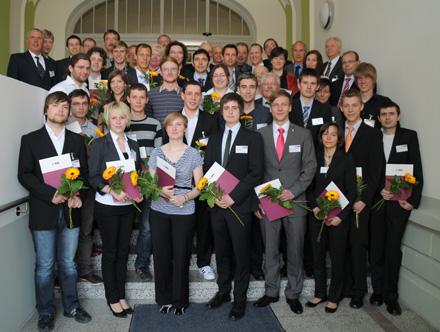 Company commits to national scholarship program „Deutschlandstipendium” for young academics.FuelCon AG has recently decided to participate at scholarship initiative „Deutschlandstipendium“ of Otto-von-Guericke University Magdeburg, starting at summer term 2011. Thus, the company not only grants a talented engineering student, but is also committed to keep skilled young professionals in the region of Saxony-Anhalt.Jointly financed by the national scholarship program of the German Government and private donors, the “Deutschlandstipendium” shall support high-motivated students who are showing not only strong performance in courses, but also social engagement. After a careful selection process by the University, the excited students received their scholarship certificates end of April during the ceremonial awarding. One of the key reasons for FuelCon’s participation was of course own entrepreneurial aims encouraging young academics for staying in the region and winning them as new staff for the company. But also the personal solidarity of the managing board with the city Magdeburg and the Federal State of Saxony-Anhalt played a major role. “Me and my partner Ingo Benecke have studied at Otto-von-Guericke University in Magdeburg, before we founded our first own company” says Mathias Bode. “We are working in a high-technical and fast developing industry field that needs clever, innovative and high-skilled people in order to develop tomorrow’s energy. The “Deutschlandstipendium” is a great initiative to assure this.”About FuelCon:Consequently intelligent: that’s how we love solutions. FuelCon is the global leading supplier of test and diagnostic systems for fuel cells and batteries. For years, our name is recognized for innovative engineering and high quality, for highest safety standards and close consultation with our costumer.Our test stations can be operated completely automatically and unattended. For fuel cells, we offer testing systems for PEM, DMFC and SOFC in a power range between a few watts up to 150kW. For evaluating batteries, we have developed a modular test station concept with different charge-discharge unit that can be customized for each technical demand. Aside the headquarters in Germany, FuelCon is with its subsidiary FuelCon Systems Inc. and several representatives active in Europe, North America and Asia.FuelCon AG Steinfeldstr. 1 D-39179 Magdeburg-Barleben T + 49 39203 514 400 F + 49 39203 514 409 www.fuelcon.com Contact: Ms. Andrea Bartels

11-29-2017 | Industry, Real Estate & Constr …
FuelCon AG
Added value due to standard configuration – FuelCon test stations convince by …
Testing and validating fuel cells is a highly complex procedure, where many single steps need to intertwine in order to eventually supply reliable measuring data and results. In dependence on the respective technology, this means especially an extensive preparation of test runs, where the test item, the test station and the test procedure as such must be enabled and adjusted for the corresponding requirements. As an experienced manufacturer of test stations
11-08-2017 | Energy & Environment
FuelCon AG
FuelCon expands portfolio for EIS measurement
For many years, FuelCon provides test stations for fuel cells and batteries that are used as reliable test equipment for R&D, validation or quality assurance. An important and complementary diagnostic tool for fuel cell and battery testing is an electrochemical impedance spectrometer. For this application, FuelCon has the TrueData-EIS – a powerful solution for daily use that can be integrated into a test station or as stand-alone version. Depending on customer's
07-04-2017 | Energy & Environment
FuelCon AG
FuelCon provides powerful test equipment of the next generation for automotive t …
For many years, car manufactures around the world research and develop various concepts for a more efficient powertrain. In this process, the main goal is the reduction of global CO2 emissions. Besides the optimization of combustion engines, the focus is set on the establishment of alternative powertrain technologies in a serial production that work without fossil fuels. The global automotive industry stuck in an enduring conversion process that influences several aspects
04-20-2017 | Industry, Real Estate & Constr …
FuelCon AG
FuelCon provides globally latest test station for fuel cell systems
The development of alternative propulsion technologies for vehicles is a recurrent topic for many years. Besides the advanced market entrance of battery-powered electro mobiles, the integration of fuel cell systems as a propulsion technology also takes on greater significance. From now on, due to FuelCon test equipment, the development of new systems can happen even better and more efficient. For more than 15 years, FuelCon AG from Magdeburg-Barleben is specialized in

05-27-2021 | Advertising, Media Consulting, …
StraitsResearch
Biofuels Market Qualitative Analysis of the Leading Players 2021 - Cosan S.A., B …
Biofuels Market 2021 Biofuels, commonly referred to as liquid transportation fuels, are derived from plant materials such as forest and mill residues, wood and wood residues, agricultural crops and residues, aquatic plants, animal wastes, livestock residues, and other organic portion of urban waste. The rising global concern regarding the fossil fuel prices and availability has drawn the attention to biofuels as a substitute for petroleum-derived fuel. In addition, these biofuels can also
01-22-2019 | Industry, Real Estate & Constr …
Researchmoz Global Pvt. Ltd.
Global Coal Handling System Market 2019-2025| Competitors, Business Strategy and …
Researchmoz added Most up-to-date research on "Global Coal Handling System Market Insights, Forecast to 2025" to its huge collection of research reports. Coal handling is the initial process in power generation plant or coal-fired power plant Coal handling system is used in the transportation and handling of coal. Coal handling system is an integral part of material flow and coal quality management of the plant. There are various types of coal
12-11-2018 | Industry, Real Estate & Constr …
Reportsweb.com
Ship Loader and Unloader Market Global Outlook 2026 by Top Manufactures - AUMUND …
Global Ship Loader and Unloader Market is expected to grow at a CAGR of 4.4% from 2017 to 2026. Rising disposable incomes, growing urbanization and innovative dry bulk cargo handling systems are some of the factors propelling the market growth. However, labor and other operational costs experienced in the production are hindering the market. A ship loader & unloader is a huge machine utilized for stacking mass strong materials like iron
10-02-2017 | Advertising, Media Consulting, …
Market Research Reports 2017
Ship Loader and Unloader Market Forecast to 2017-2022 Sandvik, Buhler, FAM Frder …
Global Ship Loader and Unloader Market Research Report 2012-2022 A recent report discusses the market study on "Ship Loader and Unloader Market" over the global and major regions, from angles of manufacturers, product types and end industries. This “Ship Loader and Unloader Market” research study involved the extensive usage of both primary and secondary data sources, The report on the global Ship Loader and Unloader market uses the top-down and
12-02-2013 | Business, Economy, Finances, B …
German Global Trade Forum Berlin
Green Cities - Green Industries - The 2nd. Magdeburg Conference 2013
Berlin, 1.12.2013 - Magdeburg , Saxony -Anhaltin's state capital and well known in Germany as one of the most dynamic regions in the heart of Europe, was once again host of the "Green Cities-Green Industries - The 2nd. Magdeburg Conference" on urban infrastructure, energy efficiency , green, and new technologies and the creation of highly skilled "green jobs " . Guests and Delegations from more than 10 countries
10-26-2012 | Business, Economy, Finances, B …
German Global Trade Forum Berlin
Green Cities - Green Industries - The Magdeburg Conference (20.-23.11) 2012
Berlin-Magdeburg – The world, 25th. Octobre 2012 - The capital of Germany`s federal State of Saxon-Anhaltine, Magdeburg, 1,5 hours west of Berlin along the Autobahn to Hannover will be the center of green cities – green industries activities in November when the guest delegations from Europe and China will join the ambitious programme of the organizers to promote the international exchange of minds, the creation and development of bilateral-projects
Comments about openPR
We publish our press releases on openPR.de because we like people who are "open" - just like us.
Frank Obels, CEO, INCONET - Informationssysteme, Communication und Netzwerkberatung GmbH