"Chronicles of Avael" - Orcs, Goblins and secrets for on the move 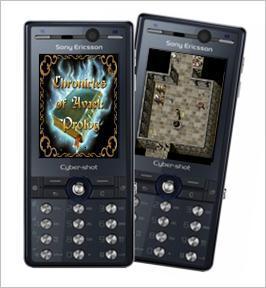 The new mobile phone game "Chronicles of Avael" is a role-playing game developed by EvilDevelopers in the tradition of AD&D and consists of short, exciting adventures tailor-made for a train journey or evening at home. In the first adventure “Prolog” the player takes the part of a young man named Lev whose family is attacked by a mysterious gang searching for a book which Lev has found. The boy is taken to an old castle from which he must now flee. His escape takes him through ancient temples and secret ways and into a mine which is not so empty as it appears... The player must solve riddles, survive combat and prove his diplomatic skills! Join Lev on his travels in a mysterious adventure story and solve riddles; survive battles and help the goblins as they try to rid themselves of a colony of Cave Spiders. Never losing sight of the burning question: who were the strangers that attacked Lev’s family in order to get their hands on the book he and his sister found? How did they know about this book? And what do they want with it?Find the book and disclose the dark secret now. The mobile game is available for free at http://www.zelfi.com/en/mobile-games/for-free/avael-free/.About Zelfi The Zelfi public limited company is a start-up located in Mainz/Germany being actively involved in the fields of Mobile Marketing and Mobile Entertainment by providing software products. The development and the service of a Mobile Marketing platform is our core business. This innovative technology-platform forms a nodal point of mobile phone users, mobile phone software developers and advertisers.Zelfi AG Vorstand: Andreas Berg Hechtsheimer Straße 33 55131 Mainz Telefon: 06131-9064850 Telefax: 06131-9064853 info@zelfi.com www.zelfi.com

You can edit or delete your press release "Chronicles of Avael" - Orcs, Goblins and secrets for on the move here

10-24-2017 | Leisure, Entertainment, Miscel …
Music Promotion Club
Enjoy Chronicles Of Zee’s New Debuted Music “In Her Eyes” On SoundCloud
Chronicles of Zee has recently come up with their new debuted music “In Her Eyes”. This music has captivated the heart of thousand of music lovers. If you are a diehard fan of pop and rock music, then you must listen to their new track. “In Her Eyes” represents the effect of women’s eyes. The description of eyes is wonderfully mentioned throughout the song. This funk and rock R&B band
03-02-2017 | Business, Economy, Finances, B …
myfairtool
The Trade Show Chronicles - a new way to become an exhibition expert
We were not born event managers. It takes years of trial and errors, mistakes and hard work to become a trade show expert, know how to plan an exhibit, lead a booth team or convert leads into customers. But do you have the luxury to wait years to build your experience, one step at a time? myfairtool announces the launch of its founder's new book: The Trade Show Chronicles is a novel following
12-02-2016 | Arts & Culture
Flying Monkey Media LLC
NEW ASSOCIATE PRODUCER FOR CANAVERAL CHRONICLES MOVIE
US based Flying Monkey Media are excited to announce Raymond Carney as Associate Producer of their forthcoming movie Canaveral Chronicles, which is due to launch in 2017. The production team, led by the critically acclaimed Director Sam L Siragusa, agrees that Carney is a valuable addition to the movie. Siragusa has a reputation for producing exceptional ﬁlm work and, in Canaveral Chronicles, he has chosen to bring together fresh acting talent
03-08-2016 | Arts & Culture
Laura Hughes
Fantasy Fiction Author Laura Hughes Announces Free Download From Inspirational B …
Fantasy fiction author Laura Hughes has announced a free download sample from her highly praised inspirational fantasy fiction book, 'The Sara Chronicles'. In the tradition of 'Lord Of The Rings' and 'Harry Potter', Laura Hughes builds entire worlds peopled with heroic role models that young readers find irresistible. Hughes' characters are richly drawn and teach young people important life skills and are filled with magic, monsters, legends and high adventures. "To begin
02-20-2013 | Arts & Culture
LuckyChaos Theater
Normal Like Us! The Depression Chronicles. A theater work presented by LuckyChao …
LuckyChaos Theater Projects presents: Normal Like Us! The Depression Chronicles Opens March 2, 10pm at Salvage Vanguard Theater Collaborative. Experimental. Music. Humor. Drama. OUR STORIES How can someone convey the experience of living with depression and do it in a way that is both easy to understand and entertaining? Leng Wong, producing director of Lucky Chaos Theater, set out to do just that with Normal Like Us! The Depression Chronicles. The
03-15-2011 | Leisure, Entertainment, Miscel …
Terrene Press
R.T. Kaelin Releases Second Entry In The Terrene Chronicles, Short Stories Inspi …
The Terrene Chronicles is a series of short stories inspired events of the past mentioned in R.T. Kaelin’s high fantasy novel, Progeny. Numerous reviews have compared R.T. Kaelin's writing style to Brandon Sanderson, Robert Jordan, and Jim Butcher. The success of R.T. Kaelin’s first high fantasy novel, Progeny, and requests from his fans prompted the author to write and publish a set of standalone short stories inspired by historical events
Comments about openPR
OpenPR is clearly structured and remains true to its principle of confining itself to the essential parts. OpenPR has proven to be a very good and reliable partner to our media agency: Within the shortest time the releases are online and go down well with the media representatives. The success of OpenPR is reflected in the steadily increasing number of press releases. It is good that OpenPR exists!
Ursula Koslik, Director Marketing & PR, F+W Hamburg