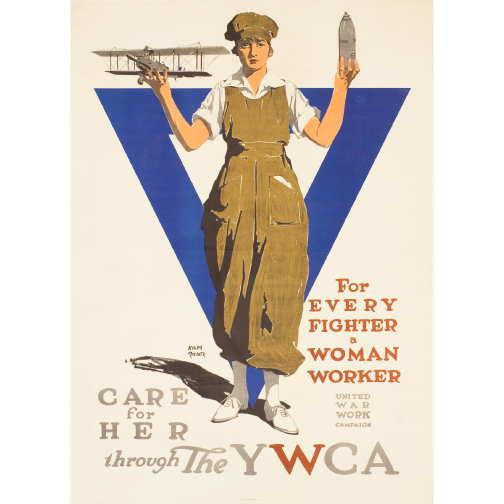 BOSTON, MA - International Poster Gallery (IPG) proudly presents “Paper Wars”, an evocative exhibition of original propaganda posters of the First and Second World Wars. The exhibition, which is free and open to the public and runs April 28 – June 15, 2011, features some of the most persuasive and galvanizing posters from two of the most significant military conflicts in world history. From enticing recruitment posters to pleas for the civilian purchase of war bonds, these posters were a driving force of patriotism and propaganda in their respective homelands. International Poster Gallery is located at 205 Newbury Street in Boston and is open daily from 10am – 6pm and Sunday from noon – 6pm. For additional information, please visit www.InternationalPoster.com.World War I was the first conflict in which the illustrated color lithographic poster was used as a means of propaganda. Already used in the world of commerce, travel, and entertainment before the war, illustrated posters provided an established and effective medium for propaganda delivery. With the outbreak of World War II, combatants once again pressed the poster into service, this time highlighting the conflict’s polarizing ideological struggle that pitted Fascism and Totalitarianism against Democracy.Highlighting the show’s fine selection of recruitment posters is Howard Chandler Christy’s 1918 call for naval recruits. The poster’s subject, a smiling woman in a low-cut United States Navy uniform, is accompanied by the text “Gee!! I wish I were a man. I’d join the Navy”. Supplementary text at the bottom of the poster urged the viewer to “Be a man and do it”, directing them to a local navy recruiting station. Posters that appealed to period ideals of masculinity were quite popular and effective recruitment tools, often combining patriotic sentiment with sexually charged imagery for maximum effect. A counterpoint to Christy’s naval recruitment poster is Adolf Treidler’s 1918 design for the YWCA. The poster highlights the emergence of the female work force during the First World War, stating “For every fighter, a woman worker.” Women played an invaluable role in both World Wars, supplementing the sudden absence of their male counterparts in the workplace to assist in the war effort, most notably in the industrial sector. The YWCA advocated for women’s rights in the workplace, limiting lengthy shifts, prohibiting night work and facilitating the organization of labor unions.Lending his iconic and undeniably American style to the war effort, Normal Rockwell also participated in the United States propaganda machine with his 1943 “Four Freedoms” series. The series was inspired by a speech by Franklin D. Roosevelt, in which he described four principles for universal rights: Freedom from Want, Freedom of Speech, Freedom to Worship and Freedom from Fear. The United States Department of the Treasure used Rockwell’s paintings to promote the sale of war bonds, debt securities issued by the government to finance military operations during times of war. Rockwell himself considered “Freedom of Speech” to be the best of the four, an example of which is featured in the exhibition.The show also features Joseph Leyendecker’s war bonds “Weapons for Liberty” campaign sponsored by Boy Scouts of America; Lucian Bernhard’s 1918 German World War I poster depicting an imposing iron fist; and Jack Campbell’s virulent 1942 “Tokio Kid”, a fine period example of the use of racial caricature to demonize the enemy.Editor’s Note: • Background and additional digital color images available. • Support for feature development on poster collecting available. • Interviews with gallery owner Jim Lapides are encouraged.In addition to gallery shows and special exhibitions, IPG’s award-winning website, www.internationalposter.com offers the largest, most comprehensive online collection of vintage advertising posters in the world. Originally launched in 1998, the site contains nearly 4,500 images accessible through a powerful search engine.Joshua Payne Fusco & Four info@fuscofour.com 617-363-0405 8 Allenwood Street Boston, MA 02132

04-20-2020 | Business, Economy, Finances, B …
Brace E. Barber
The Art of War Planning Format Released
Brace E. Barber completed a major reorganization of The Art of War principles based on the modern military strategy planning format. The new work is titled The Art of War, Organized for Decision Making. (https://amzn.to/3cscji5) Mr. Barber insists that, "this is not an insult to the original manuscript, but rather it is an intelligent and practical reorganization that allows the user to draw the full value out of Sun Tzu's
11-02-2018 | Fashion, Lifestyle, Trends
War Paint
War Paint Makeup For Men Launches
Start-up brand War Paint is due to re-launch its new range of makeup designed specifically for men. The brand offers a range of 4 core products; Foundation, Concealer, Bronzer, and Tinted Moisturiser, their products are available in 5 shades ranging from Fair to Dark. With the growth in makeup for men in recent years and the increasing demand for cosmetic and skincare products. War Paint despite being less than a year
10-10-2017 | Leisure, Entertainment, Miscel …
Advent Messenger
When Pastors Declare War Within the Church
Postmodernism has set its sights against all truth. An all out assault against the gospel of Jesus, who is the “way, the truth and the light” (John 14:6) is the target. This war mentality is the very imagery that a Seventh-day Adventist Pastor from the Pacific Northwest recently gave in the Gleaner Now, the official publication of the North Pacific Union Conference of Seventh-day Adventists. In an article entitled A Church
07-13-2016 | Politics, Law & Society
Al Carroll
HISTORIAN PREDICTS REDSHIRT FASCISM, SECOND CIVIL WAR.
FOR IMMEDIATE RELEASE: July 13, 2016 HISTORIAN PREDICTS REDSHIRT FASCISM, SECOND CIVIL WAR. Human rights activist predicts Trump’s election would be even worse than the worst predictions. Washington, DC, July 13, 2016 – A dystopian novel by historian Al Carroll predicts the most likely outcome of Donald Trump’s election would be years of repression, economic depression, the destruction of American democracy, disastrous wars overseas, and millions of minorities expelled
08-08-2011 | Business, Economy, Finances, B …
Detail 2 Leisure
Detail2Leisure Comment on Hospitality Sector Talent War
London, United Kingdom (2nd August, 2011) – Detail2Leisure, an established leisure and hospitality recruitment specialist, comment on the hospitality sector talent war across the branded restaurant market. Detail2Leisure are the chosen partner recruitment company for many of the finest and most established hospitality companies in the UK, and work in partnership with organisations to find the candidates with the most aligned experience and skills for their clients’ job vacancies. Detail2Leisure are
01-12-2011 | IT, New Media & Software
Cloudipedia
Is Salesforce Entering a Year of War?
As infrastructure prices plummet, data centers look toward value-added platforms to differentiate. The editors of Cloudipedia made a number of bold yet accurate predictions last year about the future of cloud. 2011, the editors say, will be the year to either make friends or enemies with Salesforce.com. Among the predictions last year: that infrastructure would commoditize and prices would fall, open standards would become a driving force, mega-million dollar enterprise software projects
Comments about openPR
Your portal is fast, simple, and easy to use. Others may have more functions but they also demand more editing time, you have to preformat the text in order to achieve a good result etc. I think openPR is really fantastic!
Andreas Knepper, wallmedien AG