Phuket Exhibition and Convention Centre ‘guaranteed’ to be built? 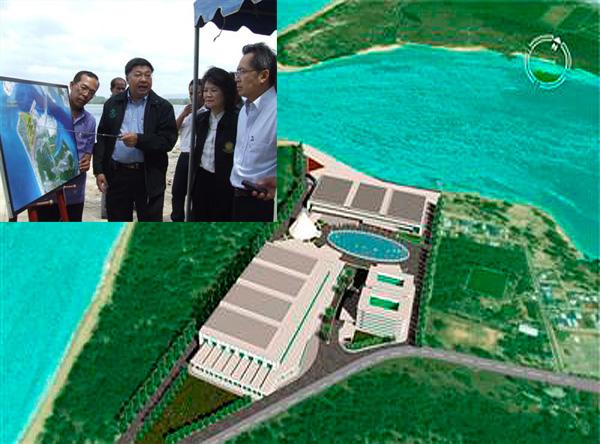 Phuket Exhibition and Convention Centre ‘guaranteed’ to be built?

Phuket, Thailand: The Phuket Exhibition and Convention Centre proposed for Mai Khao Beach is ‘guaranteed’ to be built if the Thailand Democrat Party retains power in the upcoming elections, according to Finance Minister, Korn Chatikavanij.At a meeting held in Phuket Town this week to review architects plans for the development, when questioned what would happen to the project if the Democratic Party fails to win the election, Chatikavanij replied; “I don’t know the other parties’ policies, but next term if we are still in the Government, I guarantee the project will continue. I expect the centre to be finished by the start of 2014.”Three architectural firms were chosen to present their designs at the meeting with the contract to be awarded by the end of March 2011.The first design, by KAED 103, was in the shape of a turtle shell - a reference to the Leatherback Turtles who come ashore each year on Mai Khao Beach to lay their eggs. The second was by SPAN & FED, whose design represented a conch shell. The final proposal, by ASD, was shaped like a pearl oyster shell.After the hearing attendees aired their views on the project. One man stated he would have preferred more of a Thai or Sino-Portuguese design and recommended that more care should be taken in planning security and protection against natural disasters.The President of the Phuket Tourism Association, Somboon Jirayu, remarked that he would like to see more parking spaces for buses and didn’t want hotel rooms to be built at the centre because there were already sixty thousand rooms all across Phuket and about seven thousand rooms in Khao Lak. “This number is enough to support visitors to the centre”, he said.An interesting point of view if the whole point of building a MICE venue is to attract more visitors to Phuket.The project was approved in October 2009 with a budget of 2.6 billion baht from the Thai Khem Kaeng economic fund. Construction is due to start in September this year and completion is expected in approximately three years.“During this time we also need to figure out what is the best choice for transportation systems connecting the centre with the airport and Phuket Town,” commented Finance Minister Korn.“It may be a monorail - whatever it is, if the centre is finished and the airport is expanded with improved transportation, the standard of tourism will be raised in the Andaman region, creating long-term benefits for the economy,” he added.Article Source... http://blog.phuketoceanvillas.com/phuket-exhibition-and-convention-centre-guaranteed-to-be-built/Rebecca Smith Phuket Ocean Villas - http://www.phuketoceanvillas.comRebecca Smith is a real estate journalist with more than 15 years experience. She is currently the sales director for Phuket Ocean Villas (http://www.phuketoceanvillas.com) who specialise in luxury ocean view property in Phuket, Thailand.149/12 Srisoonthorn Road, Cherngtalay, Thalang, 83110, Phuket, Thailand

You can edit or delete your press release Phuket Exhibition and Convention Centre ‘guaranteed’ to be built? here

03-16-2020 | Leisure, Entertainment, Miscel …
Phaya Naak
Phaya Naak Announces the First English Version of its Best-Selling Thai Conversa …
The independent publishing house Phaya Naak, which has sold over 5,000 guide books from French into Southeast Asian languages, has decided to go international by offering English speaking travelers a series of funny yet useful conversation guides. Nong Khai (Thailand) and Paris (France) - March 16, 2020 - Phaya Naak is an independent publishing house created in 2014 in Nong Khai, a city in Northeast Thailand. It is now releasing the
01-28-2019 | Advertising, Media Consulting, …
Market Research Store
Global Insurance Market Top player 2018 - AIA, Prudential, Great Eastern, AXA, A …
Global Insurance Market Report 2018 includes a total amalgamation of assessable trends and predicting analysis. This Insurance analysis offers an approach for a large number of clients. Employing accredited global Insurance market data resources together with various practices and tools to successfully get and study information, our accredited group of analysts, researchers, and advisors has obtained extra efforts in calling the global sector. The Insurance report suggests that the newest
08-14-2017 | Business, Economy, Finances, B …
Fior Markets
Global Insurance Market 2017 - Allianz, Muang Thai, Prudential, Thai Life, Manul …
The report studies Insurance in Global market Professional Survey 2017 : Size, Share, Trends, Industry Growth, Opportunity, Application, Production, Segmentation, Cost Structure, Company Profile, Product Picture and Specifications during the Forecast period by 2022 Global Insurance Industry 2017 is a comprehensive, professional report delivering market research data that is relevant for new market entrants or established players. Key strategies of the companies operating in the market and their impact analysis have
09-08-2016 | Advertising, Media Consulting, …
Sapporo Mercantile Exchange
SRMEX Will Launch Mini Thai Baht Futures
Innovative contract is one-tenth the size of regular SRMEX Thai Baht Futures contract. Smaller size provides cost-effective hedging and arbitraging tool for retail remitters, SMEs and investors Sapporo, 2016 - SRMEX, a key institution of the domestic financial market, an exchange that provides various economic entities with an opportunity to trade in an open market and offers investors effective investment opportunities, today announced that in a bid to further expand the
09-18-2012 | Fashion, Lifestyle, Trends
Press Club Hanoi
Tempting Thai Cuisine at Press Club
Hanoi, Vietnam- From the light and aromatic soups of the coast, to the fresh and spicy salads of the north, to the rich and colourful curries of the south, the exquisite flavors of Thailand are in the spotlight this month. From October 22 to 28, the Press Club Bar Lounge will be adding some heat to Hanoi's cool autumn weather with 'Tastes of Thailand', a mouthwatering menu showcasing some of
01-14-2012 | Tourism, Cars, Traffic
Siam Hotels & Resorts
Sukosol Group Supports Thai Flood Victims
The Sukosol Group has joined hands with the Thai Red Cross Society and UNICEF to provide emergency help and support for flood victims in Thailand through the donation of Baht 1,411,000 in much-needed funds. The money was given to the Thai Red Cross Society’s Relief Communities Help Bureau to provide “Assistance to individuals and families affected by disaster, enabling them to resume their normal daily activities independently as soon
Comments about openPR
I can't but agree to the positive statements about your portal: easy to use, clear layout, very good search function, and quick editing!
Jens O'Brien, Borgmeier Media Communication