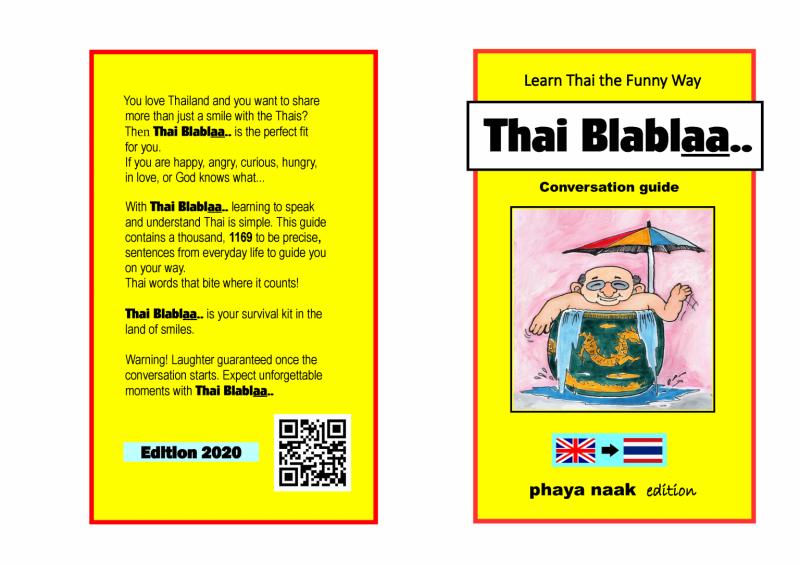 The independent publishing house Phaya Naak, which has sold over 5,000 guide books from French into Southeast Asian languages, has decided to go international by offering English speaking travelers a series of funny yet useful conversation guides.

Nong Khai (Thailand) and Paris (France) - March 16, 2020 - Phaya Naak is an independent publishing house created in 2014 in Nong Khai, a city in Northeast Thailand. It is now releasing the first ever English version of its best-selling conversation guide Thai Blablaa, part of a wider collection that includes guides in Khmer (Cambodian), Vietnamese, and Lao.

Since its inception, the company, owned by local female entrepreneur Panja Fries, has focused on delivering a different approach to languages for travelers looking for more than mechanical exchanges with the locals. It was a successful endeavor as more than 5,000 copies of the original French edition were sold.

"The main goal of our conversation guides is to help people understand what popular culture is made of", says Panja Fries, owner of Phaya Naak. "We have noticed that the new generation of travelers isn't at all happy with the way many traditional conversations guides are conceived. It's very simple: people don't travel the same way they used to. We see more and more travelers staying in foreign countries for longer periods of time, so they are more exposed not only to the language, but also to people's culture", she adds.

"Thai Blablaa is intentionally conceived to be funny as it captures the spirit and humor of the people in Thailand. It does so lightly, without ever resorting to the vulgar, always in line with everyday life and the everyday preoccupations of common people, who are often excluded from other methods", says its author, Brussels-born Georges Lemaire, who spent over 20 years travelling on and off in Southeast Asia, mostly in Thailand, when he started the project.

"I literally bought all the learning methods available over the past 20 years as I made my way around Southeast Asia", says George. "And all of them - ALL OF THEM - ended up being way too formal, too complicated, too frustrating", he adds.

Six years later, having sold French guides to travelers in Laos, Vietnam, Thailand, and Cambodia through a sales channel that excluded any partnership with big brands, Phaya Naak goes international with the first ever version of Thai Blablaa in English.

The method is simple, even for complicated languages like Thai. Everybody can improve in no time because alongside the 1,169 phrases included in the book, there are entertaining facts and anecdotes about the country, offering the reader essential cultural contexts.

The book is available in paperback, with free audio files, and it can be shipped worldwide.

Phaya naak is a publishing house created in 2014 by Panja Fries in Nong Khai, a city in northeast Thailand.

It publishes a series of conversation guides for Southeast Asian languages: Thai, Vietnamese, Lao and Khmer.

01-28-2019 | Advertising, Media Consulting, …
Market Research Store
Global Insurance Market Top player 2018 - AIA, Prudential, Great Eastern, AXA, A …
Global Insurance Market Report 2018 includes a total amalgamation of assessable trends and predicting analysis. This Insurance analysis offers an approach for a large number of clients. Employing accredited global Insurance market data resources together with various practices and tools to successfully get and study information, our accredited group of analysts, researchers, and advisors has obtained extra efforts in calling the global sector. The Insurance report suggests that the newest
09-22-2017 | Advertising, Media Consulting, …
Insurance Market Reports - MRH
Insurance Market Report for Period 2011 till 2022 Allianz, Muang Thai, Thai Life …
Global Insurance Market report provides detailed analysis of companies namely Allianz, Muang Thai, Thai Life, Siam Comn, Manulife, and Others. This report study includes global market statistics and analysis for example, company performance, historical analysis 2012 to 2016, market forecast 2017 to 2023 in terms of volume, revenue, YOY growth rate, and CAGR for the year 2017 to 2023, etc. Insurance is a business that provides coverage, in the form of
08-14-2017 | Business, Economy, Finances, B …
Fior Markets
Global Insurance Market 2017 - Allianz, Muang Thai, Prudential, Thai Life, Manul …
The report studies Insurance in Global market Professional Survey 2017 : Size, Share, Trends, Industry Growth, Opportunity, Application, Production, Segmentation, Cost Structure, Company Profile, Product Picture and Specifications during the Forecast period by 2022 Global Insurance Industry 2017 is a comprehensive, professional report delivering market research data that is relevant for new market entrants or established players. Key strategies of the companies operating in the market and their impact analysis have
06-23-2017 | Business, Economy, Finances, B …
Global Industry Report
Global Insurance Market 2017 - AIA, Prudential, Great Eastern, AXA, Allianz, Mua …
The report focuses on global major leading industry players with information such as company profiles, product picture and specifications, sales, market share and contact information. What’s more, the Insurance industry development trends and marketing channels are analyzed. Insurance is a business that provides coverage, in the form of compensation resulting from loss, damages, injury, treatment or hardship in exchange for premium payments. The company calculates the risk of occurrence then determines
09-18-2012 | Fashion, Lifestyle, Trends
Press Club Hanoi
Tempting Thai Cuisine at Press Club
Hanoi, Vietnam- From the light and aromatic soups of the coast, to the fresh and spicy salads of the north, to the rich and colourful curries of the south, the exquisite flavors of Thailand are in the spotlight this month. From October 22 to 28, the Press Club Bar Lounge will be adding some heat to Hanoi's cool autumn weather with 'Tastes of Thailand', a mouthwatering menu showcasing some of
01-14-2012 | Tourism, Cars, Traffic
Siam Hotels & Resorts
Sukosol Group Supports Thai Flood Victims
The Sukosol Group has joined hands with the Thai Red Cross Society and UNICEF to provide emergency help and support for flood victims in Thailand through the donation of Baht 1,411,000 in much-needed funds. The money was given to the Thai Red Cross Society’s Relief Communities Help Bureau to provide “Assistance to individuals and families affected by disaster, enabling them to resume their normal daily activities independently as soon
Comments about openPR
9 o'clock: discuss press release with client, 10 o'clock: submit release to openPR, within the briefest possible time release is published and displayed in a prominent place on openPR.de. I am thrilled!
Zehra Spindler, Calypso Now! - Communication Agency