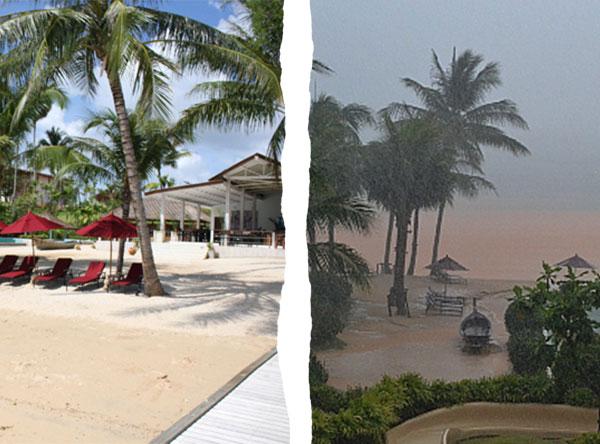 Phuket, Thailand: According to a report in the Phuket Gazette, Phuket property development The Village, Coconut Island could be facing legal action for infringing Thai environmental and licensing laws.A complaint filed by local residents at Phuket Provincial Hall last week stated that The Village was releasing untreated waste water into the sea.The matter was followed up personally by Phuket Vice Governor Somkiet Sangkhaosutthirak who visited the island last week with a thirty person inspection team.The Village’s Managing Director, Christopher Gordon, refuted the allegations stating; “All of the villas have their own [sewage treatment]. These all connect up to the central system. The wastewater is absolutely treated before it is released to the sea. It is a Thai-government approved system.”But, after further inspection, the Phuket Vice Governor remained unconvinced, commenting; “I understand that the project is on-going. We will need a team to return and inspect the project once it is completed,” he said.During the inspection, sudden and prolonged rainfall revealed that large amounts of silt were running off the construction site and directly into the sea.Further investigation showed that the The Village’s Environmental Impact Assessment Report had stipulated that the project must have a 13,000 square metre enclosure to trap any silt and allow the sediment to settle before releasing the water into the sea.Christopher Gordon has now been given up to one month to install the enclosure. The Vice Governor said that failure to do so will result in legal action being taken against the resort.Although Thai law states that this should have been done before any building work was carried out, Gordon responded by saying; “Please give me some time. I cannot do it all in one day.”Another area of concern for the Phuket Vice Governor was The Village’s hotel license, or rather a lack thereof.Gordon has been renting out Jacuzzi suites in the project’s second phase, which is still incomplete. But to comply with legislation the development must have a hotel license to do so.“The houses won’t be a problem because they are under the Land Development Act. But opening some parts for guests to rent out daily, and in the middle of the construction, must be considered as operating a hotel business. We would like to suggest that you apply for a hotel license in order to let guests stay nightly, weekly or whatever, legally. You may not fully understand Thai law, but what you are doing is risky - it can be construed as contravening the Hotel Act,” Vice Governor Somkiet warned.Christopher Gordon agreed to attend to both issues raised by the Phuket Vice Governor. However, it remains unclear why the developer did not comply with the law from the beginning.Rebecca Smith is a real estate journalist and author with over 15 years experience. She has published 3 books to date:'The Definitive Guide to buying property in Phuket' http://blog.phuketoceanvillas.com/the-definitive-guide-to-buying-property-in-phuket-pr/'10 simple ways to slash your marketing costs and sell more property' http://www.ovgmarketing.com/10-simple-ways-to-slash-your-marketing-costs-and-sell-more-property/'The Definitive Guide to buying property in Thailand' http://blog.oceanvillasgroup.com/the-definitive-guide-to-buying-property-in-thailand-pr/Rebecca is currently the sales director for Phuket Ocean Villas and Ocean Villas Group.149/12 Srisoonthorn Road, Cherngtalay, Thalang, 83110, Phuket, Thailand

You can edit or delete your press release Phuket property: The Village, Coconut Island may face legal action here

09-21-2011 | Advertising, Media Consulting, …
Phuket Ocean Villas Co. Ltd.
Thailand aims to double tourism by 2014
The Tourism Authority of Thailand (TAT) has unveiled ambitious plans to double tourist arrivals to the Kingdom over the next two years. Armed with a budget of 500 million baht (US$16.4 million) and a new campaign slogan, “The miracle years of amazing Thailand”, TAT will attempt to double arrivals to thirty million per year, whilst also increasing income from tourism to 2 trillion baht (US$65.5 billion) per annum. TAT has already earmarked
08-29-2011 | Tourism, Cars, Traffic
Phuket Ocean Villas Co. Ltd.
Phuket Boat Lagoon crosses water to add moorings in Krabi, Thailand
Phuket, Thailand: As Phuket Boat Lagoon continues to be almost always full to capacity, its owners have been looking across the water to Krabi to increase the number of yacht berths that they can offer. And it seems that their plans are well advanced, as they have just announced that phase one of their Krabi Boat Lagoon is due to be completed in November this year. The new marina is located in
08-22-2011 | Leisure, Entertainment, Miscel …
Phuket Ocean Villas Co. Ltd.
Thai massage hits new heights in Phuket - Bangkok to see climax
Phuket, Thailand: More than five hundred Thai massage therapists descended on Kata Beach in Phuket, Thailand today for an un-official attempt at setting a new world record for simultaneous massage. Although the official figure is yet to be confirmed, it is thought a total of five hundred and eighty four pairs took part. The current official Guinness World Record is two hundred and thirty two, set on 30TH March 2010,
08-18-2011 | Industry, Real Estate & Constr …
Phuket Ocean Villas Co. Ltd.
Private yachts set for smooth passage at Chalong Marina in Phuket, Thailand
Phuket, Thailand: The much trumpeted online check-in system for yachts arriving at Chalong Marina in Phuket, Thailand will finally go live on 1st September 2011. The announcement was made by officials from the Phuket division of the Software Industry Promotion Agency (SIPA) during a meeting at Phuket Provincial Hall. “We have finished developing the system and it is now in a trial period that also provides training to business operators and government

07-03-2020 | Leisure, Entertainment, Miscel …
Village Box Cafe LLC
Village Box Café Bar & Grill
The un-ordinary bar and grill. Village Box Café Bar & Grill or “The Box,” is the ultimate dining experience. A full-service restaurant, bar, grill and events venue space sure to delight. A new way to dine and entertain, consisting of an in-house branded “bar & grill,” themed events, lounges and bars, comedy and dance nights. We offer such events as our highly anticipated “Food Bar,” held nightly on the Box patio from 5-9
11-17-2011 | Sports
Purple Cake Factory SL
Superyacht Stampede at Gibraltar’s Ocean Village
As proof that Gibraltar’s Ocean Village is a superyacht magnet, this week a sextet of heavyweight vessels cruised in all requiring berths. Thanks to 2010’s Premier Berth expansion programme, there was space for all as well as a fantastic photo opportunity for passersby. Ros Astengo, Business and Development Manager at the Ocean Village Pier Office, comments, “ We had 33 metre Suakin, 43 metre Calliope, 55 metre Turquoise, 56.5 metre
06-16-2011 | Health & Medicine
Woodbury Reports
Rebuilding the Village
"In many ways, the national village (our community) is failing our children," asserted Beth Black, Founder of Cherokee Creek Boys School in South Carolina. Ms. Black appeared as a guest on 'Parent Choices for Struggling Teens' Monday, June 13, 2011. "What too many of our children are missing in growing up are adults that listen to them, experience with the outdoors and nature, quiet time with no tech toys, and
05-16-2011 | Industry, Real Estate & Constr …
Digital Lycanthrope LLC
The Village Sheds Light on Thailand Election
T F Rhoden—author of the popular Outrageous Thai—brings needed context to the upcoming Thai elections in his new book: The Village Bangkok, Thailand, May 14, 2011 -- A fictional account of modern-day life in the countryside, The Village offers a closer examination of the goals, dreams and aspirations of everyday voters. The Village explores the relationship between local villagers and their elected representatives. The narrative captures the dynamics of provincial life
03-22-2011 | Energy & Environment
Purple Cake Factory SL
Ocean Village Backs Earth Hour 2011
At 8.30pm on Saturday 26 March, Ocean Village will be joining one billion people in 4,600 cities across 130 countries around the globe in the big Earth Hour switch-off. Aside from minimal essential lighting, the Resort will be plunged into darkness as a bold reminder that we can take personal responsibility for the future of the planet we live on. Brian Stevendale, Business and Development Director for Ocean Village, comments,
12-18-2010 | Tourism, Cars, Traffic
Samui Beach Village Rentals Co Ltd
Samui Beach Village LAST MINUTE SPECIALS
Koh Samui, Thailand, December 16th, 2010: If you’re looking to book a holiday at the last minute this Christmas, Samui Beach Village has some unbelievable offers to make sure you and your wallet have a wonderful escape! Book before the 26th December 2010 and stay before the 31st December to receive some very special rates! We are offering some VERY SPECIAL RATES on our last few remaining Luxury Koh Samui Villas and
Comments about openPR
9 o'clock: discuss press release with client, 10 o'clock: submit release to openPR, within the briefest possible time release is published and displayed in a prominent place on openPR.de. I am thrilled!
Zehra Spindler, Calypso Now! - Communication Agency