Switzerland’s True Fleet with its 10th straight month of decline 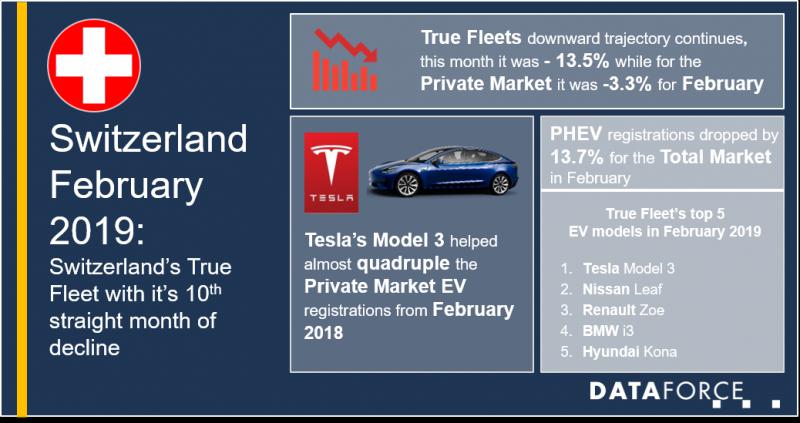 As in January, new passenger car registrations in Switzerland for February 2019 were lower than in the same month last year. Across all market segments, slightly more than 22,000 passenger cars were registered and as a result the overall market fell by 1.1%.Commercial registrations rose by 1.3% in February 2019, thus cushioning the overall market downturn to some extent. Nonetheless, it is worth taking a detailed look at the various commercial market segments in order to classify this development correctly: a little under 4,500 passenger cars were registered on companies. So, after a weak start to 2019, True Fleets had another drop, this time by 13.5% when compared to February 2018. Short-Term Rental registrations also fell by 6.9% and only tactical registrations on Dealership/ Manufacturers were positive, increasing by 27.7%, thereby representing the main growth driver within commercial registrations (same as in January).Brand and Vehicle Segment Performance With 610 registrations and a plus of 7.0% compared to the same month last year, Skoda not only ranked 1st in the True Fleet Market in February but has also taken the crown from a year-to-date perspective. Although the Skoda Octavia was again the most registered fleet model, it was unable to maintain the previous year's level (- 12.4%). However, the Karoq (+ 115.1%), Kodiaq (+ 97.6%) and Superb (+ 19.3%) all helped to compensate for this decline.Volkswagen recorded a growth of 15.5% in February, but this was not enough to defend its leading position from January. Despite a significant decline of 19.8%, BMW remains the third-strongest brand within the True Fleet Market. As already seen in January, True Fleet’s vehicle segment, Utilities, is bucking the trend seen in the market. The VW Transporter was once again the strongest growth driver within this segment, while the Peugeot Partner and the Ford Transit Custom by also managed to increase their registrations, finishing in the black.Electric cars on the rise in the Private Market Looking into the Private Market, electric cars recorded exceptional growth almost quadrupling the registrations from February 2018. This came mostly thanks to the first of the Tesla Model 3s with 195 registrations which were followed by the Hyundai Kona and the BMW i3.On the other hand, the True Fleet EV Market was not able reach its comparative figures with registrations decreasing by 22.0%. Nonetheless, the tactical channels of Dealerships/Manufacturers compensated for this development (+ 140.0%), with the Renault Zoe, BMW i3 and Tesla Model 3 accounting for more than 61% of all registrations in this segment.DATAFORCE – Focus on Fleets Dataforce is the leading provider of fleet market data and automotive intelligence solutions in Europe. In addition, the company also provides detailed information on sales opportunities for the automotive industry, together with a wide portfolio of information based on primary market research and consulting services. The company is based in Frankfurt, Germany.Christian Spahn Dataforce Verlagsgesellschaft für Business Informationen mbH Hamburger Allee 14 60486 Frankfurt am Main GermanyPhone: +49 69 95930-265 Fax: +49 69 95930-333 Email: christian.spahn@dataforce.de www.dataforce.de