Switzerland’s 2018 ends in the red, with January 2019 also following suit 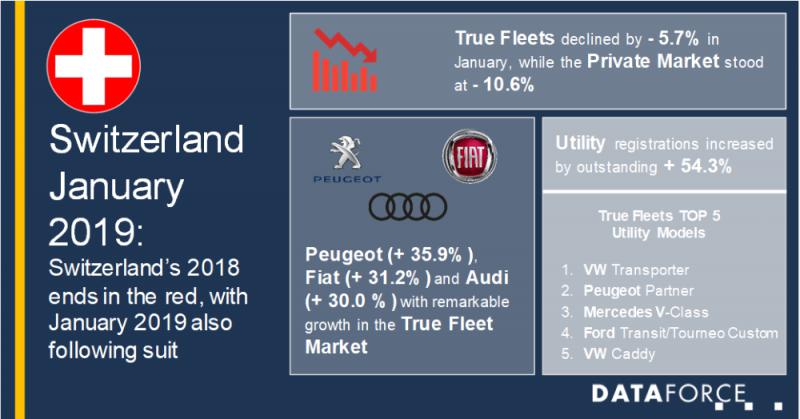 Annual balance 2018 Swiss passenger car registrations were unable to maintain the previous year's level and fell by 4.6%, with a total of slightly below 300,000 new passenger cars being registered in 2018 as a whole. A glance at the various market channels shows the following distribution: 21.4% was attributable to True Fleets (commercial registrations without dealer/manufacturer registrations and car rental companies). Within the commercial Special Channels, Dealerships/Manufacturer accounted for 17.6% and RAC (car rental companies) for 8.0% of new registrations in 2018. It was striking that Dealerships/Manufacturer registrations from August to December had a market share of at least 19.0% (peaking at 24.1% in September) and were continuously above the annual average. Rental registrations were also well above the annual average, particularly in June (14.1%) and December (16.1%). The Private Market accounted for 53.0% of all registrations and broken down into the individual months, April stood out, with almost 60% of newly registered passenger cars coming from the Private Market.Volkswagen – Fleet brand number 1 With a market share of 12.5%, VW was the strongest manufacturer in the True Fleet Market for 2018. With less than 30 new registrations separating them, BMW took second place ahead of Skoda (both holding market shares of 10.1%). They were followed by Mercedes (8.5%) and Audi (7.1%). Diesel with slight upward trend in fleets A glimpse at the overall market shows a clear distribution in favour of petrol cars (63.8%) compared to diesel cars (30.3%). With a market share of 1.8% electric vehicles do not play a significant role yet. However, if the focus is changed to the True Fleet Market, a slight upward trend in the diesel engine can be seen. While petrol registrations in the first quarter of 2018 were still 2.7 percentage points higher than diesel registrations, this gap was closed by the end of the year and even converted into a wafer-thin lead of 0.1 percentage points (diesel: 46.6%; petrol: 46.5%). The market share of electric vehicles in the True Fleet Market was 2.9%.January 2019 The new year started with a clear minus. A total of 1,115 passenger cars were registered less than in the same month last year (-5.1%). The main share of this was accounted for by the Private Market, which fell by 10.6%. Commercial registrations, on the other hand, were even positive at just under 0.5%, although a detailed look at the various commercial registration channels is particularly worthwhile: on the one hand, the True Fleet Market, for example, fell by 5.7% and Rental registrations even by -22.7%. On the other hand, registrations for Dealerships/Manufacturers recorded an increase of 19.7% over January 2018 and were thus by far the main growth drivers within commercial registrations at the start of this year. VW is also the strongest manufacturer in the True Fleet Market for January 2019 (13.9%) but is only just ahead of Skoda (13.4%), whose Octavia (477 units) is by far the most registered model in this channel. In a comparison of all brands with a minimum of 100 registrations, Peugeot (+35.9%), Fiat (+31.2%) and Audi (+30.0%) managed to achieve some buoyant growth.While the fleet market suffered an overall decline in new registrations, some vehicle segments were able to buck this trend. The Utilities segment in particular, i.e. LCV models registered as passenger cars, recorded substantial growth (+54.3%). Looking further into detail, the VW Transporter with 170 units and the Peugeot Partner with 78 units recorded significant gains over the corresponding month from last year. On the other hand, registrations in the main growth segment of recent years, SUVs, fell relatively sharply at the beginning of the year, in fact just under -7.2%. However, this development is also cushioned by registrations from the Dealerships/Manufacturer channel. This market segment grew particularly strongly (+43.9%) and thus brought the SUV segment a plus of 8.1% across all commercial market channels.(651 words; 4,051 characters)Publication by indication of source (DATAFORCE) and author (as listed below) onlyDATAFORCE – Focus on Fleets Dataforce is the leading provider of fleet market data and automotive intelligence solutions in Europe. In addition, the company also provides detailed information on sales opportunities for the automotive industry, together with a wide portfolio of information based on primary market research and consulting services. The company is based in Frankfurt, Germany.Christian Spahn Dataforce Verlagsgesellschaft für Business Informationen mbH Hamburger Allee 14 60486 Frankfurt am Main GermanyPhone: +49 69 95930-265 Fax: +49 69 95930-333 Email: christian.spahn@dataforce.de www.dataforce.de

You can edit or delete your press release Switzerland’s 2018 ends in the red, with January 2019 also following suit here