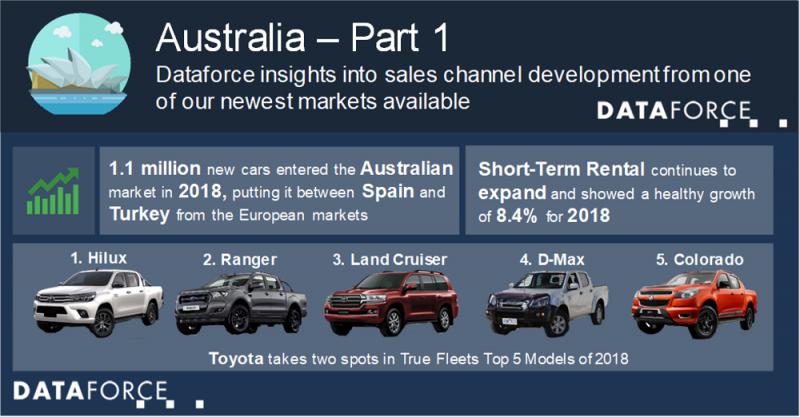 Australia, the land of the Ute (Pickup), Cyber Cars (Dealer volume demos), Novated leasing and annual registrations of around 1.1 million new cars has now become one of the latest markets to enter our portfolio. We are putting together a series of articles to hopefully give some fresh Dataforce insights into the Australian market place, with a firm eye on the True Fleet channel. With a constantly expanding population and the land mass to cope with it, Australia is certainly one of the best potential growth countries in terms of the automotive market place. The population has seen a steady rise from the official census results of 21.5 million in 2011 to the estimated 25.09 million that according to “World Populations Review” will be seen in 2019. In terms of population this puts it somewhere between the Asian neighbors Taiwan and Malaysia but in terms of land mass the 7.7 million km2 sees it ranked as the 6th largest country in the World behind Brazil with 8.5 million km2. The automotive market place is a mature one with over 50% of households having access to two or more vehicles and overall passenger car registrations for 2018 being 873,713 units and 1,110,630 units including LCVs up to 3.5t. The main OEM players in the market place have certainly changed over time. Where once the home manufactured brands of Holden (Opel/Vauxhall/GM) and Ford were all dominant they have now lost significant market share as Asian brands and a growing number of prestige European brands have taken a foothold, disrupting the market place somewhat. From a purely passenger car perspective Toyota is the current holder of the #1 brand in the market place, a position it has held since 2003, while the other top 5 brands in 2018 were Mazda, Hyundai, Mitsubishi and Kia. In fact, in terms of home-grown manufacturers you need to reach position number nine before Holden arrives on the ladder, though there really is no longer a major player producing cars in Australia.Local manufacturing from major suppliers has seemingly gone the way of the Dodo as the last manufacturing plants of Holden and Toyota closed their doors in late 2017. Ford and Holden (GM) have continued to retain development, design and research facilities in Australia but the ongoing disruption from Asian and European OEMs will continue to change the Australian automotive landscape, and these could also potentially be axed. The automotive industry in Australia has both similarities and vast differences from the European markets, and in terms of differences possibly none more so than the earlier mentioned Ute (Pickup). While in Europe it remains a niche player in Australia this segment of vehicles take both the number one and number two spots as the country’s most popular models (Toyota Hilux & Ford Ranger) and as is represented by no less four times in total inside the Top 10 popular models for 2018 (if you count the Toyota Landcruiser 200 as the Ute version is currently unable to be separated from the SUV). With Ute’s (Pickups) holding an 18.1% share of the market, making it the 3rd most popular vehicle segment, in 2018 this possibly lends itself to be a lot more like the USA where they also account for a similar share of the market and are also the 3rd most popular vehicle segment.Similarities wise Australia is also surfing the ever-increasing SUV wave. Where in 2014 it accounted for 31.5% of the market and was 2nd most popular vehicle segment in 2018 SUVs account for 42.5% of the market, propelling themselves into the number 1 spot in a similar fashion to most of the European countries. Now there is no coincidence in the ever-increasing amount of SUV’s available which are driving this change, moving from 82 models back in 2014 to 105 models in 2018 Australia is catching up with the European market. Germany for instance went from 89 models in 2014 to 121 in 2018. Our final piece for this, our first Australian article, is around True Fleets and perhaps for some of the new readers it is worth pointing out that our term “True Fleets” refers to the Market-segment/Sales channel where vehicles purchased by businesses appear. There is also sometimes an assumption that True Fleets would consist of a minimum number of vehicles i.e. 10+ vehicles to be considered into the “True Fleet” channel but this is not the case and all vehicles regardless of their corresponding fleet parc would be counted within the channel. These figures do not include vehicles purchased by Private people (Privates), rental companies (RAC), Dealerships (Dealer Demo’s/Cyber Cars) or Manufacturers (Employee’s car, Show cars, Marketing test cars). The other popular but difficult sub-segment which currently cannot be identified is the novated leasing (salary sacrifice) segment and our belief is that these will reside within the private segment at present. While True Fleet’s percentage of the market had been growing steadily since 2015 (it took a slight dip from 2014 to 2015) the volume dropped by a little over 5,000 units in 2018. Toyota is the dominating brand in the Fleet market and by quite a distance from its nearest rival, Ford. In fact, even if the Blue oval brand doubled its figures from 2018, Toyota would still be in the lead with plenty of change, though back in 2016 this was certainly a closer year. The vehicle data also shows clearly the end of the financial year in Australia, as the spike in June figures works a similar trend/effect as to what we see in the UK as the March and September spikes, just before the plate changes come into effect. True Fleets in this month may well spike up to 30-40% higher than the lowest month which is usually January. (961 words; 5,661 characters)Publication by indication of source (DATAFORCE) and author (as listed below) onlyDATAFORCE – Focus on Fleets Dataforce is the leading provider of fleet market data and automotive intelligence solutions in Europe. In addition, the company also provides detailed information on sales opportunities for the automotive industry, together with a wide portfolio of information based on primary market research and consulting services. The company is based in Frankfurt, Germany.Richard Worrow Dataforce Verlagsgesellschaft für Business Informationen mbH Hamburger Allee 14 60486 Frankfurt am Main GermanyPhone: +49 69 95930-253 Fax: +49 69 95930-333 Email: richard.worrow@dataforce.de www.dataforce.de

04-11-2018 | Industry, Real Estate & Constr …
Storewall Australia
StoreWALL Launches into Australia
Expand and organise your space with wall-mounted storage solutions from StoreWALL. StoreWALL is a premium wall-mounted storage system for home and business. The range covers wall panels, hooks, baskets, bins, brackets and shelves. Everything you need to efficiently organise and store items in the home or commercial space. With superior materials and construction, our products are built to last. Plus, you won’t find a system that’s easier to install. StoreWALL systems
07-05-2017 | Advertising, Media Consulting, …
ReportsWeb
Coffee in Australia
ReportsWeb.com has announced the addition of the “Coffee in Australia” The report focuses on global major leading industry players with information such as company profiles, product picture and specification. Influenced by the strong café culture in Australia, consumers are increasingly interested in the origins and tastes of their coffee products. Consumers ask more questions about where their coffee is from and this is reflected in the strategic plans of large companies.
06-08-2017 | Business, Economy, Finances, B …
ReportsWorldwide
Agrochemicals Market in Australia
ReportsWorldwide has announced the addition of a new report title Australia: Agrochemicals: Market Intelligence (2016-2021) to its growing collection of premium market research reports. The report “Australia: Agrochemicals: Market Intelligence (2016-2021)” provides market intelligence on the different market segments, based on type, active ingredient, formulation, crop, and pest. Market size and forecast (2016-2021) has been provided in terms of both, value (000 USD) and volume (000 KG) in the report. A
02-13-2017 | Business, Economy, Finances, B …
ReportBazzar
Cheese in Australia
Australian consumption of cheese remains buoyant with increasing demand for better quality cheese and a move away from processed cheese. In particular, cheese retail value grew 2% in current terms in 2016, up from 1% in 2015. Positive research, in recent years, on the benefits of dairy fats also contributed to increasing demand for full fat cheese. Demand for cheese was also partly fuelled by Australian consumers enjoying cheese, especially
06-09-2016 | Politics, Law & Society
ECOVIS AG Steuerberatungsgesellschaft
Australia – An Innovative Agenda?
Australia’s government tightens foreign investment laws for housing and land and introduces a National Innovation and Science Agenda to encourage innovation in business and schools. The second half of 2015 saw significant changes to Australia’s foreign investment framework come into effect, along with the government making an innovation statement which committed $1 billion over the next four years to foster and develop new ideas and new businesses in Australia. To near
05-13-2011 | Industry, Real Estate & Constr …
Capital Safety Australia
Capital Safety Australia
Fall protection for penetrations and openings in construction, civil and confined space applications! DBI-SALA, a Capital Safety brand solely dedicated to the fall protection market, has announced the launch of their NEW PenoGuard™ fall protection system. PenoGuard is a new and revolutionary safety device that dramatically increases the safety of workers around penetrations that are commonly seen in construction, civil works and confined space applications. Penoguard has numerous safety factors that
Comments about openPR
9 o'clock: discuss press release with client, 10 o'clock: submit release to openPR, within the briefest possible time release is published and displayed in a prominent place on openPR.de. I am thrilled!
Zehra Spindler, Calypso Now! - Communication Agency