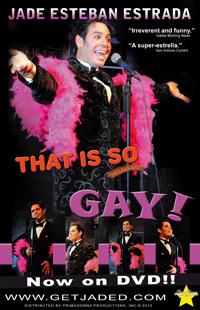 DETAILS:
Just in time for the holidays, PrimaDonna Productions, Inc. (PDP) and comedian and “super-estrella” (San Antonio Current) Jade Esteban Estrada have joined forces to bring his stand-up comedy home to DVD in "That Is So Gay!"

In "That Is So Gay!" (produced by Estrada and Chadd Green and directed by Green), the comedian brings his Latin-flavored stand-up comedy home to San Antonio for a performance at Graham Central Station. With his trademark humor and insight – not to mention his pink boa – Estrada shows his hometown audience life through his eyes in all its crazy beauty.

“This is my first comedy video,” says Estrada, “so I’m very excited to have my stand-up show on DVD.” “When Jade’s on stage, he’s truly in his element,” adds Green, “so whether you’re a longtime fan or just discovering his act for the first time, this DVD will be a real treat for you.”

Details on a release party for "That Is So Gay!" will be announced soon.

COST:
Only $15.00
***SPECIAL OFFER: The first fifty (50) customers to pre-order That Is So Gay! will receive a poster autographed by Jade Esteban Estrada.***

TO ORDER:
1. Please visit www.primadonnaproductions.com and click on “News & Events”.
2. Click on “December”, select the entry titled “Jade Esteban Estrada: ‘That Is SO Gay!’ - Coming To DVD!” and click “Read More”.
3. Click on the PayPal link in the article to pre-order and pay online.

BACKGROUND:
A veteran of stage and screen, Jade Esteban Estrada has been featured on Comedy Central and Bravo; as an actor, he has appeared on NBC’s Emmy Award-winning series "30 Rock" and "Friday Night Lights"; and his work as a singer has been featured on FX’s award-winning series "The Shield". Dubbed “America’s Prince of Pride” by NBC News, Estrada has won numerous awards and accolades for his stage work and activism, including six awards for his one-man series "ICONS: The Lesbian and Gay History of the World". In 2008, he hosted the GLAAD Media Awards in Miami, Florida; the ceremony was broadcast nationwide on Bravo.

03-01-2013 | Arts & Culture
PrimaDonna Productions, Inc.
Keeping Ron "Forever Young"
"Uncle Ronny is a living legend of Texas music," says artrepreneur Nikki Young of her uncle, Ron Young. "And we want him to stay that way - a *living* legend - for as long as possible." In that spirit, nearly 300 of Ron Young's family, friends, and fans packed Sam's Burger Joint on Sunday, February 17 for "Forever Young," an all-day benefit for the singer/songwriter, who was diagnosed with an