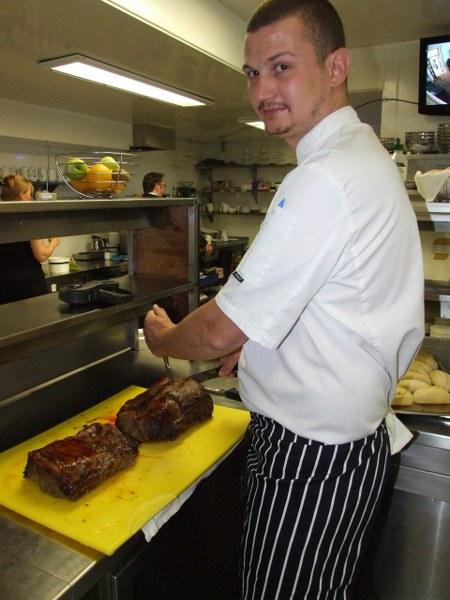 The Grand Hotel Tynemouth is a busy seafront hotel and banqueting venue, hosting 100 wedding receptions a year, as well as conferences and events, with room for up to 450 diners. It also has a popular 80-cover fine dining restaurant, two public bars serving meals and 45 guest bedrooms. At the heart of its demanding foodservice operation the hotel had three large (20 grid) thirteen-year-old combi steamers which were coming to the end of their service life. In order to maximise flexibility for both banqueting and à la carte cooking, owners Nigel and Eddie Hastie decided to replace them with two large 20 grid and two smaller 6 grid combi steamers. However, the cost of the total investment was a major stumbling block – until they talked to Rational. Lee Wilmot, development chef at Rational UK, explains: “Working with Heaton Catering Equipment (HCE) we carried out extensive tests on the old equipment. The tests showed that, by investing in new Rational SelfCooking Centers, The Grand would cut power consumption by over 25%, saving £7,000 per year in energy costs alone. If they keep them for as long as the old ones, they’ll save £90,000 over the lifetime of the machines.” Impressive though they were, the energy savings weren’t the only financial benefit. Armed with the statistics, The Grand applied to the Carbon Trust and, as a result of the replacement units’ potential impact on power consumption, was granted an interest free loan to finance the £60,000 project. “The restaurant has really taken off over the past few years,” explains Nigel Hastie. “We needed a system that would help everything run smoother. Rational was the preferred system – Martin Harrington, our head chef, had used them in the past and was keen to use them again.” It was relatively easy to apply for the Carbon Trust grant, adds Nigel. “The application was straightforward, especially as Lee helped us work out what the old system was using – the amount of aid you get depends on the energy saving. The only problems we had were the normal ones you get dealing with bureaucracy, making sure all the ‘is’ and ‘ts’ were dotted and crossed.” HCE designed the kitchen layout and services to accommodate the new equipment and project managed the installation, ensuring all works were completed within two days, minimizing the The Grand’s ‘down-time’. For the hotel, the Rationals’ self-cleaning feature is another money-saving bonus. “With the old combis we used to deep clean them every Sunday night and had to bring in extra staff. The Rationals clean themselves and that saves a lot in labour costs,” says Nigel Hastie.But it’s the SelfCooking Centers’ cooking and finishing abilities that really tick the boxes at The Grand. “The consistency is superb,” he explains. “For example, with the old combis we sometimes used to get moisture on the plate. Not with the Rational system. You know exactly what you are going to get, every time. That level of consistency really takes the pressure off the chefs.” Nigel Hastie was also impressed by the support Rational has given The Grand Hotel throughout the installation and beyond. “Lee has been superb – he’s so enthusiastic and that really makes a big difference.” For information and brochures, or to arrange to come to a free SelfCooking Center® ‘TeamCooking Live’ seminar, contact your dealer, freephone Rational UK on 0800 389 2944 or call +44 800 389 2944. For product information and contact details see www.rational-UK.com. For information about Club Rational, including recipes and combi cooking tips, visit www.club-rational.com/gb. Follow Rational UK on Twitter and Facebook.Rational invented combi-steaming in 1976. Now the company’s new SelfCooking Center® is the world’s first commercial oven that takes over the whole cooking process, allowing the chef to get on with more important things, like creativity, presentation and quality control.The chef simply tells the oven what the food is – the SelfCooking Center® does the rest. The oven will cook the food exactly how chef wants it, even with ‘low temperature’ cooking overnight.And it cooks up to 15% faster than conventional combi-steamers, saving time and moneyRational Unit 4, Titan Court Laporte Way Portenway Business Park Luton Bedfordshire LU4 8EF Press Enquiries: Toni Turner or Alison Haynes at The Publicity Works: 01263 761000; Email: rational@publicityworks.biz For more news about Rational visit the press office at www.publicityworks.biz Vic Brown at Rational UK: 01582 480388

02-24-2011 | Leisure, Entertainment, Miscel …
Rational
Rational has designed a new baked potato accessory for the SelfCooking Center
Just Spike It! Perfect baked potatoes are quicker and easier than ever with Rational’s new potato baker Baked potatoes make a handy menu item for bistros, cafes, busy pub restaurants and take-aways. Coupled with a section of toppings, baked potatoes are an easy way to give customers tasty and healthy options for little extra work. Rational’s new potato baker, designed for the SelfCooking Center, ensures that baked potatoes are cooked perfectly, with crisp
02-22-2011 | Leisure, Entertainment, Miscel …
Rational
Rational shows combi steamer cooking equipment at IFE 2011
At IFE 2011 Rational shows retailers and caterers how to cook perfect hot food to go in the ‘next generation’ combi steamer, the SelfCooking Center. IFE News: Cooking Perfect Food On The Go Rational combi steamers make their debut at IFE 2011. Stand S4062, ExCeL, London, 13-16 March, 2011 Hot food on the go is an increasingly important profit earner for many retailers and caterers. However,
02-01-2011 | Health & Medicine
Rational
Healthy cooking in hospitals at the touch of a button
Rational’s SelfCooking Center makes healthy cooking quick and easy Recently there have been many initiatives from healthcare management bodies for hospitals to offer healthy options for both patients and staff alike. This puts pressure on the catering department to deliver more nutritionally balanced meals without incurring extra cost or lengthening and complicating the overall preparation and cooking time. Rational’s SelfCooking Center has been developed not only to simplify the cooking procedure, but
01-27-2011 | Business, Economy, Finances, B …
Rational
Rational’s Limescale-free Combi Steamer for Retailers
Combi steamers are a great way for retailers to cook take-out food for customers. They’re perfect for preparing just about every popular meal-on-the-go, from pizza to pies to Danish pastries – not to mention bread, roast chicken, baked potatoes and even chips. However, these multi-tasking cooking machines use water and that means limescale, which is a major headache for users. Now Rational's SelfCooking Center frees retailers from

04-07-2021 | IT, New Media & Software
Samurai Hire
Grand Opening
FOR IMMEDIATE RELEASE Samurai Hire 06-Apr-21 We treat candidates like they are our masters – serving them is the highest honor! What if recruiters actually cared about candidates and did everything they could to serve them? Johns Island, SC, Samurai Hire opened its doors for the first time on 01-Apr-21. "I slice through the red-tape most candidates experience looking for a new opportunity. I specialize in recruiting in the IT and Healthcare space. There’s
06-19-2018 | Tourism, Cars, Traffic
American Tire Depot
Three Grand Opening Celebrations
American Tire Depot rolls into the Summer with momentum. The number one independent tire dealer in California proudly announces the Grand Opening of three new locations in Tulare, Hollywood, and West Covina. The company will be celebrating these new locations with back to back to back weekends filled with excitement of exclusive tire and automotive service offers, free food, giveaways, and plenty of entertainment. The festivities will take place in
09-11-2017 | Fashion, Lifestyle, Trends
Manscape & Massage Clinic
Grand Opening Business Event!
Manscape & Massage Clinic, a revolutionary new business concept. A full service grooming clinic offering Manscape - Massage - Beard & Barber - Spa. Proudly using Organic & Vegan grooming products. Oklahoma City, Oklahoma: A new approach to the grooming industry is headed to downtown Oklahoma City. It encompasses their own all organic and vegan grooming product line, Manscape Supply Co. The clinic approaches grooming as a head to
12-14-2011 | Tourism, Cars, Traffic
Arizona River Runners
Reunion Destination: Grand Canyon Rafting
Modern families are often spread out across the world, and family reunions are becoming increasingly more important to maintain family ties and to share experiences as a family. In addition to the distance between family members, work and activities schedules can make it difficult to plan time together with extended family. The perfect solution to this dilemma is to plan a “destination reunion” which allows families to combine
10-11-2011 | Leisure, Entertainment, Miscel …
Airhart Construction
Airhart Construction Grand Opens
Airhart Construction is preparing to unveil a new fully furnished Farmington model on Saturday, October 22 at Fisher Farm, its low-maintenance community of 71 semi-custom single-family homes in Winfield. The debut of the new model—featuring Airhart Construction’s most in-demand floorplan—is good news for buyers who desire a customizable design, open layout, and plentiful standard amenities, said Christy Whelan, director of sales for Airhart Construction. “Even more exciting news is,” Whelan added, “is
12-30-2010 | Leisure, Entertainment, Miscel …
Learning Grand Pianos
Learning Grand Pianos
For Immediate Release Harry Lynn Gold Coast, Australia 0418886229 webfoot@dodo.com.au Learning Grand Pianos http://www.learninggrandpianos.com/ Gold Coast Australia. A Brand New Website Launched Giving
Comments about openPR
I can't but agree to the positive statements about your portal: easy to use, clear layout, very good search function, and quick editing!
Jens O'Brien, Borgmeier Media Communication