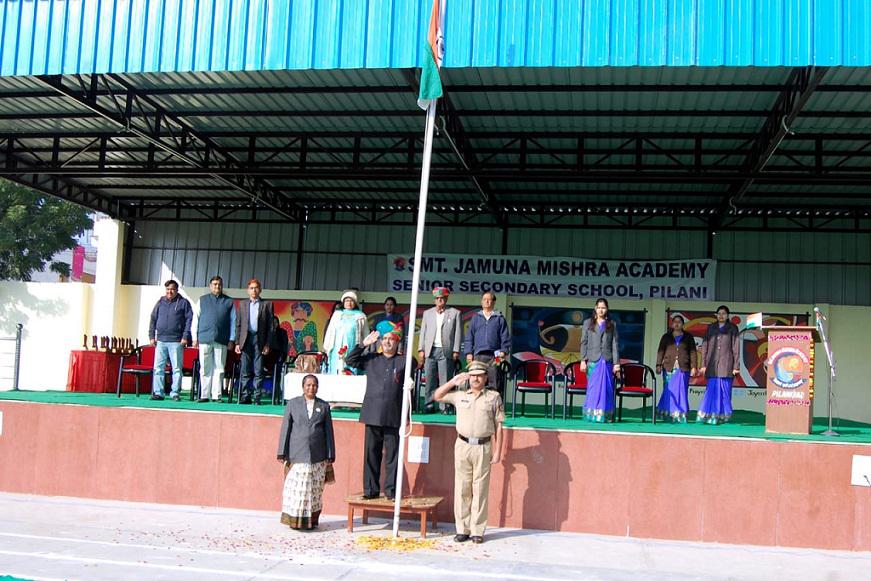 Bright sunshine peeping in ushering in a pleasant weather at Pilani during peak winter was indeed a bonus which added to the enthusiasm of the students of JMA who ensured that the 70th Republic Day celebrations was observed with patriotic fervor, gaiety and enthusiasm. Pilani considered as Oasis in the desert state of Rajasthan is well known in India today for top ranking institutions like Birla Institute of Technology and Science - BITS Pilani as well as CSIR Laboratory CEERI, L.N. Birla Naturopathy & Yoga Kendra and globally renowned Birla Science Centre. This year is very special in the sense one of the NCC (1RAJ(I)COY NCC (JD) Troop No 23/2) students of JMA Pilani namely Nishit Jhakodia is marching at New Delhi Rajpath Republic Day Celebrations.Though India became independent on 15 Aug 1947 it continued to follow the British drafted Government of India Act (1935) as the governing document with British Monarch as the head till the constitution of India was drafted and adopted on 26 Jan 1950 and declared to be a Republic. The main difference between Independence Day and Republic Day is that the former refers to the day a country has gained independence from the colonial rule or freed from the rule of another nation while the republic day refers to the day a country has become a republic. A republic refers to the form of government where the supreme power is held by its own people to elect their desired representatives as the leaders to rule the country.Right from its inception, Smt Jamuna Mishra Academy – JMA Pilani popularly known as school with 100% Results, has embarked on a rich tradition of celebrating various days of national and international significance. The school which is one among the top ranking schools in Pilani today organized on 26 Jan 2019 a function to celebrate 70th Republic Day Celebrations with President of India award winner for census ADM - Additional District Magistrate (Retd) Shri Dinesh Chandra Bhargava RAS as Chief Guest. He is indeed a multiple award winner with an Excellence Award in Law & Order Management, Excellence Award for Family Planning and many more. On arrival, the Chief Guest had a blend of traditional welcome with tilak and the trumpeters from the brass band playing the welcome tune. Following the Flag hoisting and Natinal Anthem, Principal Mrs Booma Natarajan introduced the Chief Guest to the gathering giving his credentials and a to a thunderous round of applause said that apart from being a dedicated capable and highly respected administrator, Shri Dinesh Bhargavaji has always been a compassionate and empathetic social worker loved by public at large. After a group song packed with patriotism, the Chief Guest inspected the parade and took the salute. The JMA Pilani School girls band did a dazzling display of various formations and played several all time great tunes. The speech in Hindi titled ‘Veer Jawan’ by Class X student Arvind Sharma got a huge appreciation from the gathering. Prizes were distributed to toppers of first term examination from class 1-12 and medals / certificates to the band students. The Karate and Yoga display were done to perfection. The chief guest congratulated the school for being one of the most sought after schools in Pilani and had words of praise for the band display calling the performance as nothing less than the very best. He advised the students to give importance to Swachh Bharat for keeping the nation at large clean. With singing of Vande Mataram, when the 70th Republic Day celebrations at JMA ended, the students and teachers who attended the same left with beaming faces and feelings that they were indeed part of an institution which is a glittering jewel in the crown among various schools at Pilani Rajasthan. Shri Mahendra Kumar anchored the proceedings and proposed vote of thanks. For more details about JMA Pilani see http://www.jmapilani.org/About JMA Pilani: Jamuna Mishra Academy - JMA Pilani is a Co-educational English Medium School with Experienced Teachers, Spacious Classrooms and Modern Amenities designed to impart Quality Education combined with All Round Personality Development and lay the Best Foundation for the Child’s Future. While the school admits both boys and girls, the girl student enrollment has been steadily rising every year and is presently nearly 50% of the total strength. The school has for boys and girls NCC, girls’ band which has been winning laurels every year. Two NCC cadets have been selected for participation in Republic Day Camp RDC 2019 and one Selected for Chhatrapati Shivaji Trail Trek 2018. Yoga and Fine arts are not just part of school routine but a way of life for the students.Mrs Booma Natarajan, M.Sc., M.A., B.Ed. Principal, Jamuna Mishra Academy – JMA Near Old Pilani Post Office Pilani Rajasthan 333031 India Phone 91-1596-242314 Email booma_pilani at yahoo.co.in Website: http://www.jmapilani.org/ FaceBook: https://www.facebook.com/JMAPilaniRajasthanRank1/

04-10-2019 | Business, Economy, Finances, B …
The Rug Republic
Press release from The Rug Republic
The Rug Republic (TRR) is all about simplifying the journey from the factory to the floor. A journey that brings home, handmade best-seller rugs to customers globally. Some of the most adorable rugs we make are from recycled materials, denim being the hottest in global home fashion. Here is a photo-story of how these jeans are imported from across the world in containers and each component of theirs is recycled
02-05-2018 | IT, New Media & Software
MarketResearchReports.biz
Czech Republic: Country Intelligence Report
"Czech Republic: Country Intelligence Report", is a new Country Intelligence Report by GlobalData, which provides an executive-level overview of the telecommunications market in Czech Republic today, with detailed forecasts of key indicators up to 2022. Published annually, the report provides detailed analysis of the near-term opportunities, competitive dynamics and evolution of demand by service type and technology/platform across the fixed telephony, broadband, mobile and pay-TV markets, as well as a
07-28-2017 | Business, Economy, Finances, B …
MarketResearchReports.biz
Fuel Cards in the Czech Republic Market
MarketResearchReports.Biz presents this most up-to-date research on "Fuel Cards in the Czech Republic 2016". Fuel Cards in the Czech Republic 2016 is invaluable for issuers of fleet cards, fuel retailers, fleet leasing companies and other suppliers to the sector. Based on research with issuers and fuel retailers it provides commercial (B2B) fuel card volume (split by fleet and CRT), value and market share forecasts to 2021, key data on independent and
06-08-2017 | Business, Economy, Finances, B …
ReportsWorldwide
Agrochemicals Market in Czech Republic
ReportsWorldwide has announced the addition of a new report title Czech Republic: Agrochemicals: Market Intelligence (2016-2021) to its growing collection of premium market research reports. The report “Czech Republic: Agrochemicals: Market Intelligence (2016-2021)” provides market intelligence on the different market segments, based on type, active ingredient, formulation, crop, and pest. Market size and forecast (2016-2021) has been provided in terms of both, value (000 USD) and volume (000 KG) in the
04-23-2012 | Business, Economy, Finances, B …
Nair & Co.
VAT Updates: China, Czech Republic, Romania, Portugal
China Plans to Extend VAT Pilot Scheme to Beijing in July China’s pilot scheme for VAT which is intended to replace the current business tax in Shanghai is likely to be extended to Beijing in July, this year. Currently, VAT is being applied only to the manufacturing industry. The pilot VAT rates of 11% and 6% are mainly being introduced to support the services sector such as transportation. China commenced the
07-07-2011 | Energy & Environment
Vario green energy Concept GmbH
6.2 Megawatts installed in the Slovak Republic
German Vario green energy group puts six Slovak solar parks on the grid Holzgerlingen/Munich, 6 July 2011. The Vario green energy group completed construction of six solar parks with a power of 1 to 1.2 Megawatts each at three locations in the Slovak Republic in May and June 2011. The company handed over the turn-key plants to German and Slovak investors. The project planning, system configuration and the delivery of all
Comments about openPR
9 o'clock: discuss press release with client, 10 o'clock: submit release to openPR, within the briefest possible time release is published and displayed in a prominent place on openPR.de. I am thrilled!
Zehra Spindler, Calypso Now! - Communication Agency