Minister of Agriculture at WELTEC BIOPOWER 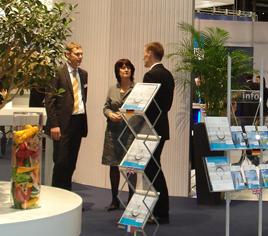 Minister of Agriculture Grotelüschen at WELTEC

At the BioEnergy Decentral in Hanover, Germany, the biogas plants of WELTEC BIOPOWER GMBH attracted a lot of international attention. Together with more than 1,900 exhibitors, the company from Vechta presented itself within the framework of EuroTier, the world's top event for animal production, to more than 140,000 visitors, including 24,000 from abroad.Visitors from Eastern Europe, Spain, and England were especially interested in plants for the conversion of waste and food leftovers to energy. The exhibition contacts document that organic waste is increasingly regarded as a resource-friendly energy source with a high potential. In this segment, WELTEC BIOPOWER has in recent years established international reference plants whose quality is also based on the company's remarkable production depth. Due to its entirely new exhibition booth layout design, WELTEC was singled out by the German Agricultural Association (DLG) for the tour of Astrid Grotelüschen, Minister of Agriculture of Lower Saxony. The Minister also took some time to get first-hand information on the subject of waste fermentation from WELTEC BIOPOWER. Among other things, she was informed about the newly commissioned waste recycling plant in Rushden, England. She was also invited to Rushden in order to see the efficient plant in action. On an animated world map, she could see that more and more orders are being received from abroad, providing evidence of the global leadership position that the company from Lower Saxony now occupies in the field of decentralised energy production. Most guests also showed a keen interest in the new control system for biogas plants, which could be tested directly at the exhibition booth. "In personal conversations, the users confirmed that in the future, they want to be able to observe and control all processes at a glance", says Jens Albartus, Director, summarising the needs of the users. The demand, especially of farmers, for mobile control via smartphones demonstrates that technical progress is in vogue whenever the devices simplify and facilitate the handling. The new control system for biogas parks is appealing because it simplifies the application. Representatives from the industry have praised the control system as a suitable, simplifying instrument because it enables the networking, monitoring, and operation of various subsystems, such as the gas treatment.Established in 2001, WELTEC BIOPOWER GmbH is a leading provider of biogas plants. Based on the modern approach of experienced engineers, the company from Vechta, Lower Saxony, with its staff of close to 70, offers complete biogas plants from one source. One of the main strengths of the medium-sized enterprise is the ability to deliver individual and flexible solutions – from compact plants to large computer-controlled plants in the megawatt range, waste recycling plants, and biogas parks with gas processing technology. The Könnern industrial zone between Magdeburg and Halle, Germany, is home to one of the world‘s largest biogas parks, built by WELTEC BIOPOWER. In its capacity as general contractor, WELTEC was responsible for the overall project planning, turnkey setup including the infra- structure, approval planning, production, and installation, as well as the operational launch and comprehensive biological supervision of the park. The concept comprises the processing (amine treatment) and feed-in of biomethane into the natural gas grid. Another WELTEC biogas park in Barsikow, Brandenburg, has been generating up to 4.3 million standard cubic meter a year since the beginning of 2010, and in Arneburg, Saxony-Anhalt, one of Europe‘s largest biogas parks will supply the equivalent of 7,000 homes with power and heat. The plants have a modular structure. WELTEC BIOPOWER uses only proven system components and develops most of the technologies along the entire value chain internally: fermenter technology, mixing technology, control technology, hygienisation systems, and digestate processing solutions originate from the company. As the hydrogen sulphide and ammonia compounds contained in biogas corrode unprotected parts, WELTEC builds the fermenters from stainless steel. This ensures a long useful life of the plant. The great manufacturing depth also guarantees a consistently high standard regardless of the location and ensures an export rate that is far above the industry average. Meanwhile, the company‘s quality is renowned worldwide. In 2009, a Chinese investor engaged WELTEC BIOPOWER GmbH for the setup of a biogas plant. The plant with an output of 370 kWel is China‘s first biogas plant that meets German quality standards. In 2008, WELTEC BIOPOWER GmbH became one of the first providers of complete biogas plants to be certified by TÜV Rheinland according to DIN EN ISO 14001:2004 and the quality management standard DIN EN ISO 9001:2001.WELTEC BIOPOWER GmbH Zum Langenberg 2 D – 49377 Vechta GermanyThomas Wilkens Marketing t.wilkens@weltec-biopower.de Tel. (+49) 4441 - 999 78-220 Fax (+49) 4441 - 999 78-297www.weltec-biopower.de

09-05-2014 | Energy & Environment
WELTEC BIOPOWER
WELTEC BIOPOWER receives order for 1.1 MW extension in Dorset
Award-Winning AD plant processes food waste to energy Weltec Biopower (UK) Ltd, based in Stoneleigh, Warwickshire, has been granted the contract to extend the award-winning food waste AD plant in Piddlehinton, Dorset. Plant owners Eco Sustainable Solutions Ltd. are expanding with a further 1.1MW of food waste processing capacity. This follows on from the Weltec successes of commissioning two other plants in early 2014. With other construction projects underway, new
07-17-2012 | Energy & Environment
Weltec Biopower
WELTEC BIOPOWER to Heat Swiss ArmyWELTEC BIOPOWER to Heat Swiss Army
In May, WELTEC BIOPOWER GmbH started building a biogas plant with an electrical output of 370 kW in Bure in the French-speaking part of Switzerland. The plant‘s entire heat surplus will be used to heat the local training barracks. The plant site in the Swiss Canton of Jura boasts fertile soil and a lot of agriculture. Therefore, the„Bio.Etique. Energie SA“ plant will mainly process farm manure from the surrounding agricultural establishments
07-22-2010 | Energy & Environment
WELtec BioPower
Agrargesellschaft Kandelin GmbH Invests Again in WELtec Plants
In the future, German farmers will step up their investments, especially in renewable energies. Thus, established biogas manufacturers like WELtec BioPower GmbH from Vechta will receive more domestic orders, especially from agricultural facilities that already run WELtec plants. Two biogas plants of WELtec have been in operation at Agrargesellschaft Kandelin GmbH in Neuendorf and Wüsteney, Mecklenburg-Western Pomerania, since 2007. The construction of the third biogas plant started in May 2010, and
06-10-2010 | Energy & Environment
WELtec BioPower
United Kingdom Opts for WELtec BioPower
WELtec BioPower GmbH from Vechta, Lower Saxony, will complete a 1 MW biogas plant with integrated unpacking and separation system and shredder for the British company Fernbrook Bio before the end of 2010. The plant, which belongs to the Rothwell Lodge Farm in the East Midlands, will convert 30,000 t of biowaste and manure of the farm‘s cattle herd into electricity. Additionally, the substrate of close-by farms (pig manure, flotate

04-21-2020 | Science & Education
The NDE OBE Research Project
A New Study on Near-Death Experiences Launched by Ordained Minister
Casa Grande, AZ - Near-death experience (NDE) researcher, former out-of-body (OBE) practitioner, and ordained minister Robert King has just launched a new study called The NDE OBE Research Project in which he and his team are trying to discover and determine the differences and commonalities between out-of-body experiences (OBEs) that take place during a near-death situation and those which take place under other circumstances and conditions. King asserts that understanding the
09-05-2013 | Business, Economy, Finances, B …
Stoneleigh Park
Minister opens West Midlands business centre
A government minister has hailed an innovative rural hub in Warwickshire as a perfect example of a launch-pad for new and small businesses in rural areas to thrive. Owen Paterson MP, Secretary of State for Environment, Food and Rural Affairs, today officially opened the new Rural Innovation Centre at Stoneleigh Park which is part of the Warwickshire Rural Growth Network. The Rural Growth Network is among five pilot projects across England which
11-16-2011 | Business, Economy, Finances, B …
The CWC Group
Sheikh Abdullah Zainal Alireza, Minister of Commerce & Industry
Sheikh Abdullah Zainal Alireza, Minister of Commerce & Industry is confirmed to give a Keynote Address at Saudi Innovation, Diversification & Investment (SIDI) Forum & Exhibition 2012. Taking place at the Al Faisaliah Hotel, Riyadh, Saudi Arabia on 25-28 March 2012. The event will focus on ‘industry led job creation’, the role of the private sector and the incentives and opportunities being implemented by the Government and stakeholders. "The time has
07-29-2011 | Energy & Environment
Blueberry PR
Minister helps Christmas tree farmer complete new plantation
Minister for Climate Change and local MP Greg Barker joined Christmas tree farmer Clive Collins to plant the 5,000th sapling at Catsfield Christmas Tree Farm, near Battle in Sussex. Planting 5,000 trees this year was a momentous task and Clive was delighted Greg accepted his invitation to join him to mark the completion of the new plantation. Clive has been growing and supplying Christmas trees to retail and commercial customers for over
05-19-2011 | Health & Medicine
Presseabteilung Taipeh Vertretung
Taiwan’s health minister lodges WHO protest
By Elaine Hou Department of Health Minister Chiu Wen-ta lodged a formal complaint with the World Health Organization May 16 over its reference to Taiwan as a province of mainland China in a leaked internal memo. “Describing Taiwan in such a manner is disrespectful,” Chiu said. “We expect the WHO to take immediate action in correcting its mistake.” Chiu, who is attending the World Health Assembly in Geneva, made the remarks
03-25-2011 | Business, Economy, Finances, B …
Perigord Group
Minister Offers Solidarity to Christchurch Irish Firm
Irish Minister Frances Fitzgerald TD, Minister for Children, along with His Excellency Máirtín O'Fainín, Irish Ambassador for Australia took time on their recent visit to Christchurch, New Zealand to meet with a local office of Irish firm, The Perigord Group. Christ Church, NZ, Mach 25, 2011 -- Irish Minister Frances Fitzgerald TD, Minister for Children, along with His Excellency Máirtín O'Fainín, Irish Ambassador for Australia took time on their recent visit
Comments about openPR
I can't but agree to the positive statements about your portal: easy to use, clear layout, very good search function, and quick editing!
Jens O'Brien, Borgmeier Media Communication