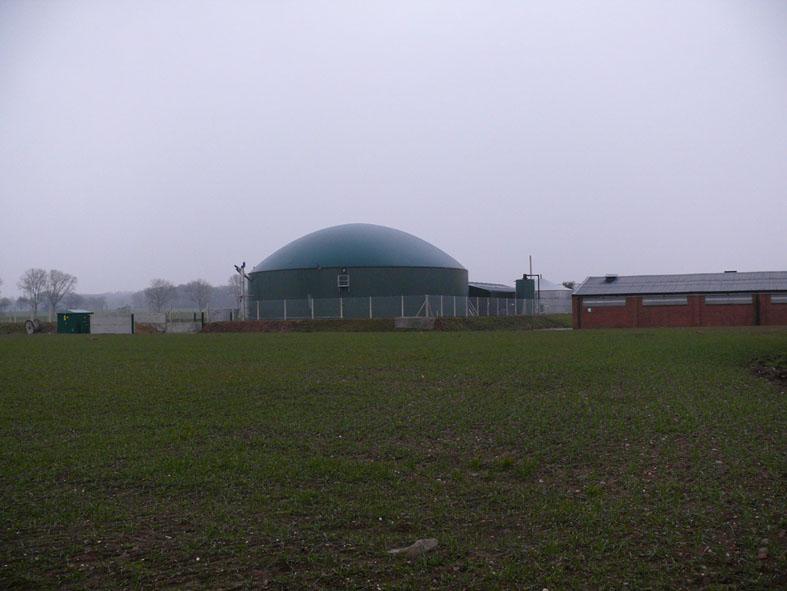 WELtec BioPower GmbH from Vechta, Lower Saxony, will complete a 1 MW biogas plant with integrated unpacking and separation system and shredder for the British company Fernbrook Bio before the end of 2010. The plant, which belongs to the Rothwell Lodge Farm in the East Midlands, will convert 30,000 t of biowaste and manure of the farm‘s cattle herd into electricity. Additionally, the substrate of close-by farms (pig manure, flotate fat) will be fed into the two fermenters of 106,000 cu ft each in order to supply about 2,000 homes with power and heat. Two tanks of 120,000 cu ft each serve as dige- state storage units. A hygienisation unit heats the digestate to 70°C in order to make it fit for use as fertiliser.In Europe, Great Britain boasts the second-largest biogas potential after Germany. If the available sources were used consistently, more than two million homes could be supplied with green energy from British fermenters via AD (anaerobic digestion). Slowly but surely, anaerobic digestion is gaining popularity among the Brits – mainly because of government measures such as the biomass strategy and the waste strategy but also because of the good reputation of the energy plant technology „made in Germany“.For the generation of energy from biomass, British investors traditionally rely on the qua- lity of German plant engineers. Thus, the mature and efficient technology that is planned and built by manufacturers like WELtec BioPower has been in the game in the UK ever since biogas plants started to be built. The variable feed-in tariffs are another reason why municipal and industrial investors prefer solid, proven biogas plant technology. After all, process reliability means investment security.Thanks to the experience gained in more than 200 biogas plant projects, WELtec BioPo- wer GmbH from Vechta in Lower Saxony signed its first contracts in the UK back in 2005. In England, Scotland, and Wales, the plant population under the WELtec label now totals 1.5 MW, plus another 3 MW that are currently under construction or planning.Investors are especially interested in the reputation of the biogas plant manufacturer and a high in-house production rate, which is particularly significant for exports. Due to the manufacturing depth, the certified manufacturer does not need to purchase any stra- tegic parts or material on site and can provide a location-independent quality guarantee. This is something importers appreciate. Furthermore, the stainless-steel fermenters used by WELtec are 100 percent resistant to aggressive substances.The last three plant orders that WELtec received from Wales, England, and Scotland use industrial food waste as substrate. This is where the greatest energy potential lies, and the waste strategy has proved to be effective in discouraging the deposit of waste and rather encouraging the use of waste. In terms of the biogas potential, the „Biogas Baro- meter“ of EurObserv‘ER for 2007 positions Great Britain (1.62 MTOE) on the second place after Germany (2.38 MTOE). In contrast to Germany, where more than 70 percent of the potential originates from agricultural sources, about 90 percent of the raw material in Britain comes from landfills.The figures also furnish evidence of the pressure to act, as residual waste in landfills generates methane gas, which is especially harmful to the climate. In Europe, unused waste is one of the main methane sources. Abandoning the practise of depositing biowaste in landfills could represent a major contribution to the goal of the European Commission to reduce the emission of climate-wrecking gases by 20 percent by 2020.Jens Albartus, Director of WELtec BioPower GmbH, points to another ecological aspect: „The compost that can be generated from biowaste replaces a growing share of agricu- ltural fertiliser. Compost and digestate provide valuable humus and improve the water storage capacity of agricultural areas. This aspect, which until recently was only rele- vant for Southern European countries, now plays an increasingly important role in other countries, too.“Established in 2001, WELtec BioPower GmbH in Vechta, Lower Saxony, Germany, is a leading provider of complete biogas plants. Based on the long-standing experience of its parent companies and the modern approach of young engineers, the company, with its staff of close to 60, offers complete biogas plants from one source.As the hydrogen sulphide and ammonia compounds contained in biogas corrode unprotected parts, WELtec makes use of stainless steel fermenters. This ensures a long useful life of the plant. WELtec BioPower uses only proven system components and develops most of the technologies internally, such as fermenter technology, mixing technology, control technology, hygienisation systems, and digestate processing solutions.WELtec BioPower biogas plants are characterised by a modular structure. This enables individual and flexible solutions – from compact plants to large computer-controlled plants in the megawatt range, gas processing technology, and waste recycling plants.By continuously expanding its export rate, WELtec BioPower GmbH is the only leading manufacturer of biogas plants that was able to generate more sales and earnings over the past three years despite the negative market trend.A key success factor of WELtec BioPower is the quality of the premium plants. Thanks to its advanced production depth, WELtec does not need to outsource any parts or material and guarantees a consistently high quality around the globe.In 2008, WELtec BioPower GmbH became one of the first providers of complete biogas plants to be certified by TÜV Rheinland according to DIN EN ISO 14001:2004 and the quality management standard DIN EN ISO 9001:2000.WELtec BioPower GmbH Zum Langenberg 2 D - 49377 Vechta Contact: Thomas Wilkens Phone: +49 (0)4441 / 99 97 8-220 Fax: +49 (0)4441 / 99 97 8-8 E-Mail: T.Wilkens@weltec-biopower.de www.weltec-biopower.de

09-05-2014 | Energy & Environment
WELTEC BIOPOWER
WELTEC BIOPOWER receives order for 1.1 MW extension in Dorset
Award-Winning AD plant processes food waste to energy Weltec Biopower (UK) Ltd, based in Stoneleigh, Warwickshire, has been granted the contract to extend the award-winning food waste AD plant in Piddlehinton, Dorset. Plant owners Eco Sustainable Solutions Ltd. are expanding with a further 1.1MW of food waste processing capacity. This follows on from the Weltec successes of commissioning two other plants in early 2014. With other construction projects underway, new
07-17-2012 | Energy & Environment
Weltec Biopower
WELTEC BIOPOWER to Heat Swiss ArmyWELTEC BIOPOWER to Heat Swiss Army
In May, WELTEC BIOPOWER GmbH started building a biogas plant with an electrical output of 370 kW in Bure in the French-speaking part of Switzerland. The plant‘s entire heat surplus will be used to heat the local training barracks. The plant site in the Swiss Canton of Jura boasts fertile soil and a lot of agriculture. Therefore, the„Bio.Etique. Energie SA“ plant will mainly process farm manure from the surrounding agricultural establishments
11-26-2010 | Energy & Environment
WELtec BioPower
Minister of Agriculture at WELTEC BIOPOWER
At the BioEnergy Decentral in Hanover, Germany, the biogas plants of WELTEC BIOPOWER GMBH attracted a lot of international attention. Together with more than 1,900 exhibitors, the company from Vechta presented itself within the framework of EuroTier, the world's top event for animal production, to more than 140,000 visitors, including 24,000 from abroad. Visitors from Eastern Europe, Spain, and England were especially interested in plants for the conversion of waste and
07-22-2010 | Energy & Environment
WELtec BioPower
Agrargesellschaft Kandelin GmbH Invests Again in WELtec Plants
In the future, German farmers will step up their investments, especially in renewable energies. Thus, established biogas manufacturers like WELtec BioPower GmbH from Vechta will receive more domestic orders, especially from agricultural facilities that already run WELtec plants. Two biogas plants of WELtec have been in operation at Agrargesellschaft Kandelin GmbH in Neuendorf and Wüsteney, Mecklenburg-Western Pomerania, since 2007. The construction of the third biogas plant started in May 2010, and

02-04-2021 | Health & Medicine
HTF Market Intelligence Consulting Pvt. Ltd.
Bio Pharma Buffer Market – A comprehensive study by Key Players: Bio-Rad, Lonz …
Latest Market intelligence report released by HTF MI with title "COVID-19 Outbreak-Global Bio Pharma Buffer Industry Market Report-Development Trends, Threats, Opportunities and Competitive Landscape in 2020" is designed covering micro level of analysis by manufacturers and key business segments. The COVID-19 Outbreak-Global Bio Pharma Buffer Market survey analysis offers energetic visions to conclude and study market size, market hopes, and competitive surroundings. The research is derived through primary and secondary
02-28-2019 | Business, Economy, Finances, B …
Qurate Business Intelligence
IVIG Market Anticipated a Noteworthy CAGR during 2019-2024 & Companies Included …
A report added to the rich database of Qurate Business Intelligence, titled “World IVIG Market by Product Type, Players and Regions - Forecast to 2024”, provides a 360-degree overview of the Global market. Approximations associated with the market values over the forecast period are based on empirical research and data collected through both primary and secondary sources. The authentic processes followed to exhibit various aspects of the market makes the
07-12-2018 | Energy & Environment
Market Research Reports Search Engine - MRRSE
Green & Bio-based Solvents Market Analysis, Demand, & Opportunities till 2023 | …
A latest research report titled as “Green & Bio-based Solvents Market for Paints & Coatings, Printing Inks, Commercial & Domestic Cleaning, Adhesives & Sealants, Pharmaceutical, Cosmetics, and Other Applications - Global Industry Analysis, Size, Share, Growth, Trends and Forecast 2015 - 2023” has been recently added to the vast portfolio of Market Research Reports Search Engine (MRRSE) online research offerings. This report is a professional and in-depth analysis on the
06-27-2018 | Advertising, Media Consulting, …
business news
Global Bioplastics (Bio-plastics,Bio plastics) Market 2018 - Braskem, BASF
Apex Market Reports, recently published a detailed market research study focused on the “Bioplastics (Bio-plastics,Bio plastics) Market” across the global, regional and country level. The report provides 360° analysis of “Bioplastics (Bio-plastics,Bio plastics) Market” from view of manufacturers, regions, product types and end industries. The research report analyses and provides the historical data along with current performance of the global PP Pipe industry, and estimates the future trend of Bioplastics
04-12-2018 | IT, New Media & Software
The Insight Partners
Worldwide Bio-Electronics Market 2025 – Global Analysis and Forecasts by Type …
Bio-Electronics is defined as the electronic devices used for bio-medical purposes, and helps in creating and evaluating the new technologies for better understanding of biological systems. The increasing demand of bio-electronics to meet the overwhelming need in healthcare industry will boost the bio-electronics market in forecast period. Furthermore, the growth in research of implantable devices for developing robust and reliable implantable medical devices will increase the demand of bio-electronics in
03-28-2018 | IT, New Media & Software
Orbis Research
Bio Electronics and Bio Sensors Market Forecasts, 2017-2025
Description: The global bio electronic market is valued USD $15 billion in 2016 and is expected to grow at a CAGR of 11.6% during the forecast period 2017-2025. The market is driven by various factors such as rapid advancement in semiconductor technology, high demand in implantable medical devices, increasing prevalence of neural and cardiac diseases among others. The emerging healthcare technologies such as lab on chip, ambulatory surgical centres, and personalized devices are
Comments about openPR
Your portal is fast, simple, and easy to use. Others may have more functions but they also demand more editing time, you have to preformat the text in order to achieve a good result etc. I think openPR is really fantastic!
Andreas Knepper, wallmedien AG