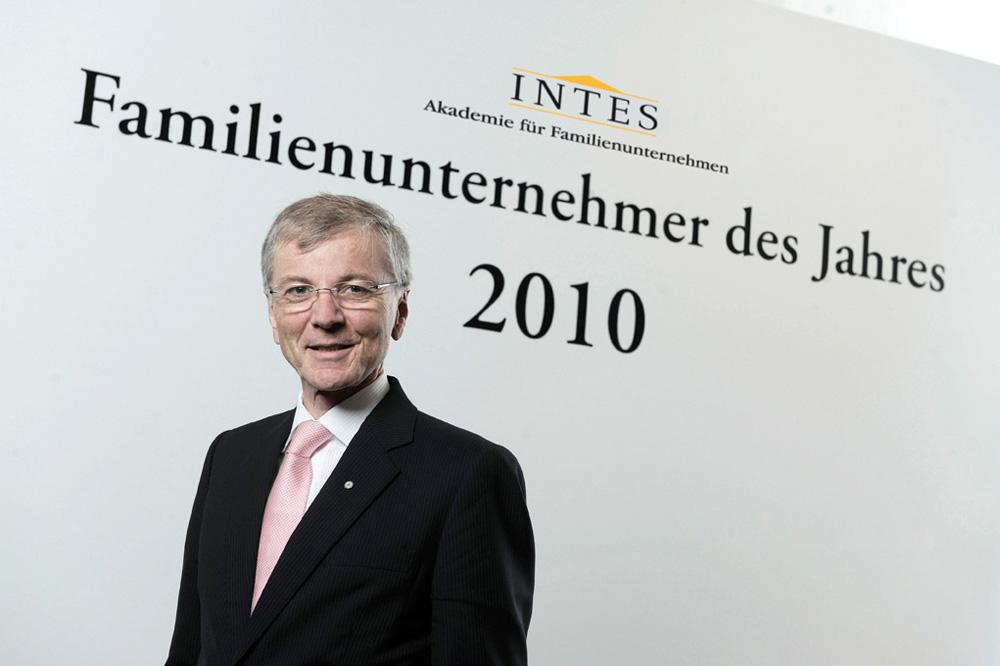 Stefan Messer, owner and CEO of Messer Group GmbH, has been honoured for his exemplary business achievements by being named ‘Family Entrepreneur of the Year’ at this year’s INTES Business Success Forum. The award is bestowed by INTES in association with the business magazine ‘impulse’. Explaining the judges’ decision, Prof. Peter May, head of the judging panel and founder of INTES, said: “When all seemed lost for this family-run company with its more than 100-year history, Stefan Messer succeeded in taking the business back into family ownership.”

The industrial gas supplier laid the foundation for renewed business success by taking all the Messer Group shares back into family ownership. Stefan Messer had to accept a three-year non-competition obligation and subsequent one-year ban on using the Messer brand in Germany as a result of this financing. Since the mid-60s, the Messer family had only held one third of the shares in the company which belonged to the Hoechst Group and later to Aventis. The newly formed company, Messer Group GmbH, launched its business activities from Sulzbach, in the Taunus region, on 7 May 2004, with over 30 operating companies in Europe, Asia and Peru. The business owner returned to the German market with Messer Industriegase GmbH in 2007. Areas in which industrial gases are used include mechanical engineering, food production and medicine. Today, the world’s largest owner-managed industrial gas specialist employs some 5,200 staff in over 30 countries. In 2009, the annual turnover was 797 million euros.

The nine-strong judging panel, made up of business and media representatives as well as partners of the INTES Academy for Family Businesses, was particularly impressed with the strategic return of the company into family ownership and the practice of “good governance”. Virtues such as responsibility, endurance and entrepreneurial flair have been the cornerstone of the Messer family’s socially responsible way of doing business for generations.

Stefan Messer was lauded by Dr. Nikolaus Förster and presented with the award in recognition of his lifetime achievement as an entrepreneur. The award ceremony took place before an audience of some 200 guests at the 2010 INTES Business Success Forum’s evening function, which was held on 4 November at the Grandhotel Schloss Bensberg.

Messer is one of the leading industrial gas companies, and is active in over 30 countries in Europe and Asia, as well as Peru, with over 60 operating companies. Its international activities are managed from Frankfurt am Main, whilst management of core technical functions – logistics, engineering, production and applications engineering – is undertaken from Krefeld. In 2009, about 5,200 employees generated a consolidated turnover of €797 million.
From acetylene to xenon, the Messer Group has one of the most diverse product portfolios on the market – it produces industrial gases such as oxygen, nitrogen, argon, carbon dioxide, hydrogen, helium, shielding gases for welding, specialty gases, medical gases and many different gas mixtures.
The Messer Group has state-of-the-art research and competence centers in which it develops applied technologies for the use of gases in almost every sector of industry, in food technology and environmental technology, medicine as well as research and science.

04-07-2016 | Leisure, Entertainment, Miscel …
Buddha-Bar London
Buddha-Bar celebrates 20 years & launches in NYC - Stefan Stefanov
Buddha-Bar Restaurant London, owned and managed by Stefan Stefanov continues to have an uncompromising style they have practised and perfected. Followed by its tremendous success, Mr Stefan Stefanov will be launching a new Buddha-bar site in NYC at Tribeca. A harmonizing flurry of Pan Asian delicacies and exotic ingredients, are just some of the key elements that can be found at Buddha-Bar Restaurant, 145 Knightsbridge. The interiors contemporary feel, excels and breaths
11-21-2014 | Arts & Culture
Szczesny Factory
CU1 Gallery presents Stefan Szczesny
Miami, FL - On the occasion of Art Basel Miami Beach CU1 Gallery presents an exceptional exhibition of the internationally renowned artist Stefan Szczesny. The exhibition will be on display from December 1-7 at CU1 Gallery's exhibition space in downtown Miami. A former protagonist of the bold figurative painters of the “Neue Wilde” (Nouveaux Fauves), Szczesny is widely known for his exuberant and sensual style celebrating the beauty of life.
08-27-2013 | IT, New Media & Software
HYPE Innovation
Stefan Kaspari joins HYPE Innovation as COO
Bonn and Boston (July 2013) - Stefan Kaspari becomes HYPE Innovation’s new Chief Operating Officer (COO). In this role, he will lead the sales, presales, and marketing divisions. Stefan joined HYPE from T-Systems, where he was a Senior Vice President and an authorized signatory. Leading a team of 350 people, Stefan was responsible for worldwide sales and business development (marketing, operations, portfolio management) for the service offering of T-Systems, generating
05-24-2012 | Arts & Culture
Szczesny Factory
Stefan Szczesny: Major exhibition in Frankfurt am Main, Summer 2012
A major exhibition of Stefan Szczesny’s artworks will open on June 28, 2012, in Frankfurt’s Palmengarten. The exhibition will feature about 70 sculptures, in particular the artist’s black-steel “shadow sculptures”, but also paintings and ceramics. The exhibition’s epicentre is the Palmengarten, but artworks will be on display in other locations as well. Born in Munich in 1951, Stefan Szczesny is among the protagonists of the ‘Junge Wilde’ movement which emerged
09-30-2010 | Industry, Real Estate & Constr …
Messer Group GmbH
Stefan Messer receives “Focus for Excellence 2010”
Stefan Messer, CEO and owner of industrial gases specialist Messer, will be rewarded for his entrepreneurial achievements with the entrepreneurs’ award “Focus for Excellence 2010”. This award is presented by the entrepreneurs’ association Liberaler Mittelstand Hessen e.V. once each year to entrepreneurs and companies who stand out on account of the traditional values they put into practice and their exemplary entrepreneurship. According to the association this includes “implemented sustainability as
01-14-2009 | Fashion, Lifestyle, Trends
Excess Magazine
Excess Magazine names Stefan Toussaint as VP Development
New York, New York- World Gate Org. and Excess Magazine President/ Chief Executive, Phil Guillaume, tabs Stefan Toussaint as Excess Magazine's VP for Development and Operations, a key high profile position. Toussaint, a graduate of Virginia Tech, will be responsible for Excess Magazine’s organizational development and overall team strategy. Brought in for his depth of knowledge, problem solving capabilities, and previous magazine experience, Toussaint will accelerate the productivity of Excess
Comments about openPR
OpenPR ist the nicest and most clearly laid out PR platform I have seen to this day. The press releases are displayed very nicely and clearly and without any unnecessary frills. The updates are fast and the finished release looks appealing and is clearly legible. Even with 16 years of experience one discovers new things from time to time. Congratulations!
Gabriele Ketterl, Director Marketing & PR, Menads