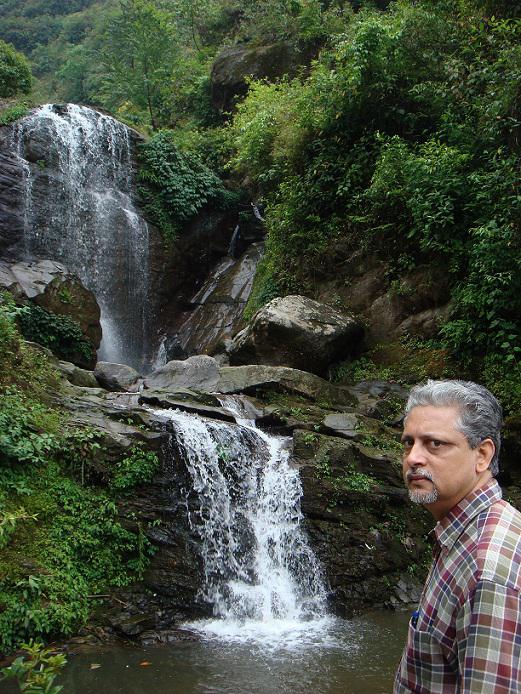 Several alumni of BITS have made their names as writers like Dilip D’Souza, Shashi Warrier, Vikram Sampath, Utkarsh Rai, ND Badrinath, Rashmi Datt, etal. Not many have ventured into writing in regional languages like Tamil. Although Bhaskar has always studied in English medium even at school level (Sainik School, Amaravathi Nagar, TN), his natural love for his mother tongue Tamil and his innate talent for expressing himself in both poetry and prose, fiction and nonfiction - has led him to pursue his passion for Tamil writing in parallel - as one would do a Dual Degree in BITS Pilani. He writes with his pseudonym GB Chathurbhujan which happens to be the name of his son. Son of a Railway employee, love for travel is in his genes and his market research work too him far and wide. He is a nature lover and several of his stories have germinated from his travels. According to him people and their emotions are the centers of his stories. Poem writing comes up spontaneously for him.Based in Chennai he holds MMS (1975 – 1980) from Birla Institute of Technology and Science - BITS Pilani and is a well-known name in the field of Qualitative Market Research in India - having spent more than three decades in this field working for leading organizations such as Marketing & Research Group (MARG) and Indian Market Research Bureau (IMRB) at their Mumbai and Bangalore offices and subsequently running his own Market Research Company: Mindscan. He has authored a book based on his Indian Qualitative Market Research experience - “Everything You Always Wanted to Know about Qualitative Market Research ". This book is available on Amazon. His impressive list of books published so far includes:Chathurbhujan Sirukathaigal: His first book of short stories - carrying 38 crisp short stories touching upon a kaleidoscope of characters and themes. Some of these short stories are set in Pilani - the campus that lit his literary fire and fanned his passion for writing. Many of the stories included in this book had earlier been carried in leading Tamil Magazines such as Kalki, Kalaimagal, Amudhasurabhi etc. (An English translation of this work by Geetha Jayaram titled "A Room of Her Own” has been brought out and is available on Amazon. This book carries a foreword from Asokamitran, the well-known Tamil writer and Sahithya Academy Award winner). Unakku Annan Irukkindraanaa? - This second book of short stories by Baskar Ayer has 26 crisp stories and carries a foreword of commendation by Maalan, the well-known Tamil writer and Columnist.Kala Sonna Kaaranam - This third book of short stories carries 21 short stories. Again, Maalan has commended this collection.Marakka Mudiyaatha Thamizh Pazhamozhigal - This book - a book of short commentaries on more than 100 Tamil proverbs introduces the reader to the beauty and wisdom enshrined in Tamil proverbs that have come down through the oral traditions of common people. Dr.Va.Ve.Su, -the well-known Tamil Scholar has written a foreword to this book. Mr.M.Selvaraj, Former Head of Tamil Department at Sainik School Amaravathi Nagar and the Tamil Teacher who introduced Baskar Ayer to the charms of Tamil has provided a loving foreword too. Chathurbhujan Kavithaigal: A book of Tamil Verses covering a range of emotions and subjects - right from romance to Bhakti, Patriotism and Social change. The book carries a laudatory foreword by Padmasri Avvai Natarajan, well known Tamil Scholar and Former Vice Chancellor of Tamil University and another by Isaikkavi Ramanan, the reputed Tamil Scholar and an Orator. The book release function was presided over by Thirupur Krishnan, Editor of Amudhasurabhi, a Tamil Magazine of considerable standing and literary merit.And this story on Baskar Ayer has a twist. Beyond being a successful Tamil author, Baskar Ayer is also a known face on Tamil TV Channels as he is a sought- after Advertising Model in Chennai. He has appeared in over 60 Tamil TV Commercials and 10 Tamil Movies - all in the span of the last six years. He takes up his senior citizenship with effect from today 14 Jan 2019 and is going to come up with a very special book by the end of this month as part of his Shashti Abda Poorthi elaborate celebrations which is being planned on 9 Feb 2019. Some of his short stories have been centred on senior citizens and some of his poems have poured their plight in words. He does have a plan to write some special stories and poems on senior citizens but for the time being would not like too disclose details. His love for Alma mater BITS Pilani is immeasurable and he had played a stellar role in raising funds for Prof SS Ranaganathan Memorial Teaching Excellence Award and is active in BITSAA Chennai Circuit.In coming times, one can expect more books to come out from the stable of Proud to Be Bitsian - Baskar Ayer Email: kvprgirija@gmail.com Mobile: + 91 98400 96329For more details see https://www.bitsaa.org/About BITSAA: BITS Alumni Association (BITSAA) has emerged as one of the strongest alumni networks of any university. BITSAA International engages in charitable and educational activities by raising funds for setting up endowments, creating scholarships, rewarding teaching and research and generally promoting the development of resources at Birla Institute of Technology and Science at Pilani, Dubai, Goa & Hyderabad campuses. BITSAA International also aims to strengthen the ties, friendship and communication amongst former students, alumni faculty and friends of the Institute. BITSAA International provides a number of channels for people to stay connected with each other and with Birla Institute of Technology & Science. Notable other alumni initiatives for BITS Pilani include Prof SSR Memorial Teaching Excellence Award, Atma Nirbara multi crore Pilani Resource Centre by 75-80 batch alumni, Prashant Anuradha Palakurthi Research Endowment and many more. For more on BITSAA see https://www.bitsaa.org/Prof BR Natarajan BITS Pilani Alumnus Pilani Rajasthan India 333031 Phone: +91-9799476406 Email: brnatarajan@bitsaa.org Website: https://www.bitsaa.org/

04-19-2022 | Advertising, Media Consulting, …
SME Futures
SME on Cloud Leadership Yatra- Tamil Nadu
SME on Cloud is a platform that will highlight, evangelize, and amplify cloud adoption across Indian SMEs that have gone beyond the web to radically improve their operations and push the boundaries of the businesses. This platform aims to spread awareness about such digital transformation initiatives led by our resilient SME leaders in the wake of the recent disruptions, especially since the COVID-19 pandemic struck and changed the world forever.
07-12-2021 | Industry, Real Estate & Constr …
Digpu
TEEMAGE PRECAST BUILDERS IN TAMIL NADU
Teemage Sets New World Record by Constructing a Hospital in 45 Days Tamil Nadu, India: Not Many People know that the recently constructed building for the Government Erode Medical College and Hospitals in Erode District, Tamil Nadu was completed in just 45 days using precast concrete technology, the construction commenced on May 18 and Completed on July 1 2021. Despite the pandemic situation and lockdown, the district administration has permitted the
10-23-2020 | Business, Economy, Finances, B …
Remitbee Inc
Sinhala and Tamil Languages Now Supported on Remitbee's Website
We are always updating and upgrading the Remitbee Online Money Transfer App and website. We have the pleasure of serving clients from all over the world because of this, accessibility to our service is one of our biggest concerns! We are pleased to announce that we have added Tamil and Sinhala language options for those visiting our site. Sinhalese and Tamil are the two official languages of Sri Lanka. If you’d
10-11-2018 | Media & Telecommunications
Shamanpictures
New Upcoming Tamil Movie "Thorati"
THORATI : THE UNTOLD STORY BEHIND THE LIVES OF SHEPHERDS Creating a real connection between viewers and characters in a story is the key to the successful film. When a viewer feels empathy and emotional vibes with a character,they are more likely to let the movie inspire them.In that way, Thorati captures the untold story behind the lifestyle of shepherds and sheep rearing culture. The real life incident happened in 1980’s
07-27-2018 | Advertising, Media Consulting, …
Bhasha Bharati Arts - Translation Services in India
Hire professional Tamil Translators for authentic translation
When you think about Indian regional languages, there are hundreds of such having different accent, lingos, cultural affect and tone. To translate any document from English to any of these Indian languages, you need a professional service. The same is with the Tamil translation. Tamil, a Dravidian language is the official language of Tamil Nadu, Puducherry and some parts of Andaman and Nicobar. It is the official language of Singapore
06-22-2017 | Sports
webindia
Sports News in Tamil
Kamran Akmal-Gautam Gambhir: Gautam Gambhir is known to play his cricket with passion. India-Pakistan games are often high on passion and intensity. The occassion was the 2010 Asia Cup semifinal, and another high voltage India Pakistan clash was on the cards. Akmal made a loud appeal for caught behind which Gambhir didnt like, and the two players had a go at each other. Then, drinks break was announced, and both the
Comments about openPR
Your portal is fast, simple, and easy to use. Others may have more functions but they also demand more editing time, you have to preformat the text in order to achieve a good result etc. I think openPR is really fantastic!
Andreas Knepper, wallmedien AG