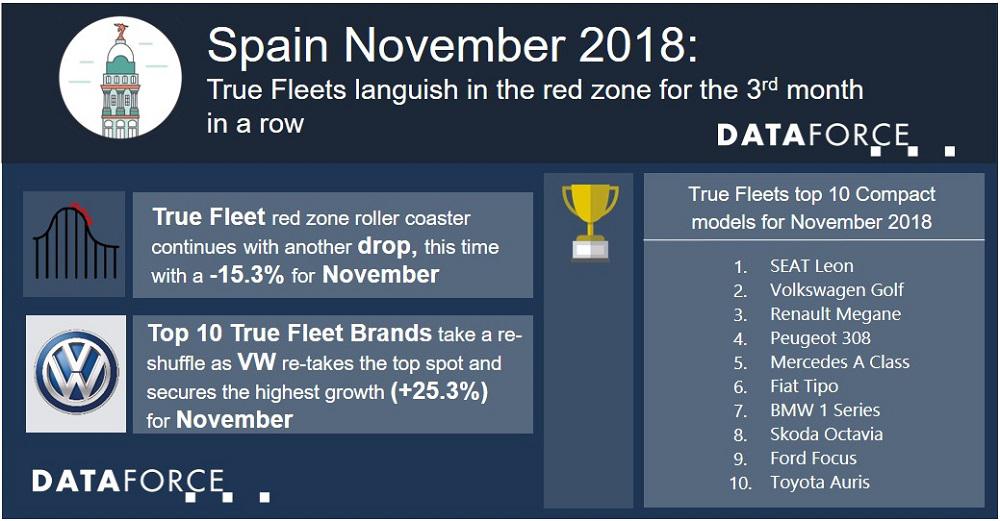 The red zone rollercoaster continues in the Spanish market as we see the True Fleets Market drop again to a 15.3% in comparison to November 2017. Both the Private Market and Special Channels also suffered a similar fate with the former down by 9.9% and the latter somewhat steadier with a 16.3%. This left the Total Market to finish on a little less than 96,000 registrations or a 12.2%, its 3rd month in a row of 5-digit figures. We can only hope that next month brings some winter sun to the Spanish True Fleet figures and perhaps arrest the slide.Brand performance The top 10 brands had a serious re-shuffle with only two OEMs retaining last year’s place for November. VW could once again claim the crown for the month with Renault (6th) the brand having to give up the spot. The Wolfsburg manufacturer had mainly the Polo and T-Roc to thank as both hit healthy three-digit volume growth. Volkswagen also scored the highest growth of 25.3% for an OEM inside the top 10. SEAT took 2nd for its home market pushing itself one place up on the podium, while the final spot went to Peugeot with an impressive three-place jump despite posting a negative growth month.BMW, Toyota and Renault followed with the Japanese maker the only one of the three to post a positive month and thus missed out on leapfrogging BMW (4th) by only 29 registrations. Impressive expansions from the Prius Plus, which grew by 70.2% and C-HR with 55.3%, secured their good month. Mercedes in 7th was the first non-mover, Nissan secured 8th (a two-place jump) and Ford was the second OEM to retain it place. Surprisingly, all three of these brands achieved this despite a negative growth month. Opel took the final spot, with only Grandland X, Crossland X and the Combo putting in positive volume growth for November.Vehicle Segments Surprisingly SUVs were not the highest volume channel in regard to the vehicle segments and when we split into the sub-segments it was the Compact Car segment which topped the list, though with a negative growth of 19.9%. Only 2 segments posted positive results; PC Large, thanks to the S-Class and Audi A8 and SUV Small; and it was predominantly the models, VW T-Roc, Peugeot 2008 and Audi Q2 which upped their volume for the month helping their segment to finish on a + 5.2%. Hardest hit in terms of volume were actually the Compact Cars, despite them being the number 1 segment, and they were closely followed by the PC Medium which lost nearly half their registrations from November 2017, though there were also positive results in the Medium segment top 20, namely the VW Arteon up by 331.3% and the Škoda Superb expanding by 97.3%.(480 words; 2,711 characters)DATAFORCE – Focus on Fleets Dataforce is the leading provider of fleet market data and automotive intelligence solutions in Europe. In addition, the company also provides detailed information on sales opportunities for the automotive industry, together with a wide portfolio of information based on primary market research and consulting services. The company is based in Frankfurt, Germany.Richard Worrow Dataforce Verlagsgesellschaft für Business Informationen mbH Hamburger Allee 14 60486 Frankfurt am Main GermanyPhone: +49 69 95930-253 Fax: +49 69 95930-333 Email: richard.worrow@dataforce.de www.dataforce.de